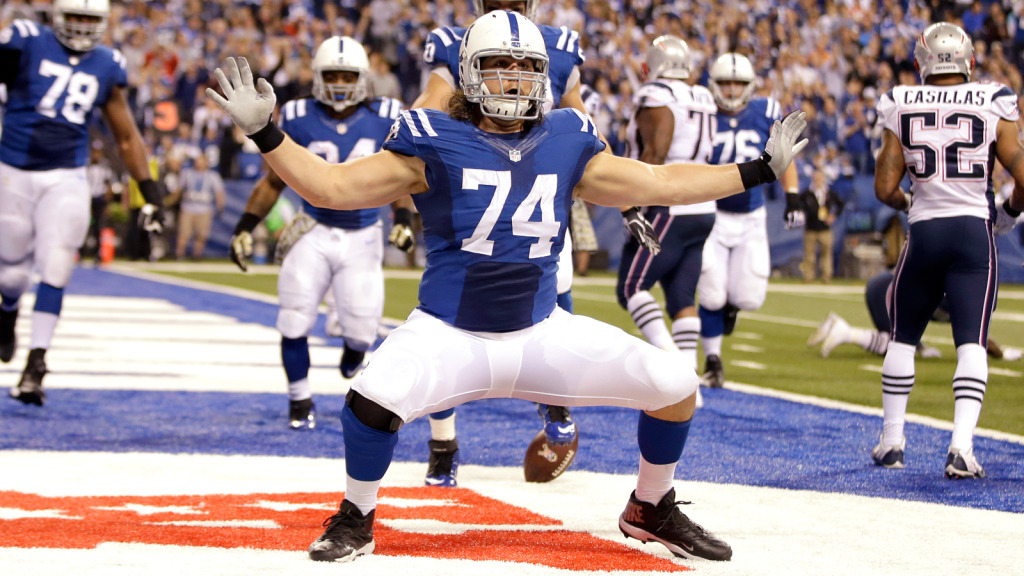 We’re inching closer to the start of the playoffs and some players are celebrating like Street Fighter characters, while other players beat up a team like they’re in a street fight. The Manning boys are reminded that they always have a job where they can cut meat and Kyle Orton continues not catching a break.

The Patriots running back hadn’t had much of an NFL career, but as is typical of the Pats, they brought him up and he instantly becomes a star. Gray had 38 carries for 199 yards and four touchdowns. The four touchdowns matched the rushing touchdown total for the entire NFL, while the 38 carries was the most in the league in 5 years as the Pats walloped the Indianapolis Colts 42-20. The Pats are shaking off the early cobwebs entirely to get into third gear and pull away from the rest of the AFC as per usual.

Nobody told Anthony Castonzo they were having a poor game against the Pats, as he celebrated his touchdown early in the 4th quarter. And how did he celebrate? With the Dhalsim dance from Street Fighter. No further comment necessary.

The Kansas City Chiefs have leaned a lot on Jamaal Charles this year and the win against the Seattle Seahawks encapsulates how much Charles can do for them. In 20 carries, Charles got 159 yards and two touchdowns. Including a burner 47 yard run, Charles has had 133 rushing attempts for 692 yards this season. In Chiefs wins, Charles has 109 rushing attempts and in their losses he has only 24 attempts. For an Andy Reid offense, that’s a lot of runs, but given another system, Charles would be running 20 times a game easily. Time to bask in the shiny glow of JC.

Peyton Manning was virtually shut out by the Saint Louis Rams in a 22-7 loss. Of course Peyton still managed 389 yards passing, but only had one touchdown and two interceptions against a defense that is okay, but doesn’t destroy worlds with defensive line. He was due one of these games, but it still did not look great.

Meanwhile, Brother Eli was in East Rutherford giving up 5 interceptions to the 49ers. Even though it was a close game, Eli sealed the deal with his fifth INT being a red zone pass that ended the day. Sure, Eli had a touchdown, but when his opposing quarterback had a better day, while only completing 15 passes, that’s not a good look for the ever inconsistent G-Men.

JJ Watt single handedly broke the Browns spirit on Sunday. He caught a pass offensively for a touchdown, recovered a fumble, had 5 tackles, one sack and had not one, but two, roughing the punter penalties called against him as the Texans knocked the Browns into next week. JJ probably followed the game by going to the Browns home and toilet papered it while pouring sugar in their gas tank. Please JJ Don’t Hurt Em.

Orton was hosed on an intentional grounding call that was so patently false, the referees should have just cancelled the game and awarded victory to the Miami Dolphins. Because of the spot of Orton and the Bills line of scrimmage, the grounding call turned into a safety for the Fins. If the zebras are going to be in the bag for another team, at least give them something of a fair fight.

Dagnabit. This was so close to a win. My opponent had Peyton Manning on the worst game of the season and I had a huge performance from the Buffalo defense, LeSean McCoy and Jordy Nelson, but I just wasn’t able to gain enough ground. Both of the teams blew it on starting quarterbacks, as the guys on our bench score 20.68 and 22.00 respectively. The next three games are teams that are almost as bad (or even worse) than mine, so I have a chance to rack up some wins to get into the playoffs, but we’re just about ready to hang up the fantasy cleats.

Detroit visit the Patriots, where two high octane offenses will collide and one will probably crash and burn. San Diego Chargers are in their end of season decline and the St Louis Rams are high off their containment of Peyton Manning, so what will they do against Philip Rivers? Probably something that winds up with Rivers having another child. The Giants are on Sunday night hosting the Dallas Cowboys in a division matchup for the “Uh, maybe they’re good?” Bowl. Arizona at Seattle will be the one to watch as the Cardinals are still on their ascension to Super Bowl levels of awesome, while Tampa Bay at Chicago will be worth missing unless you have a family member playing in the game.