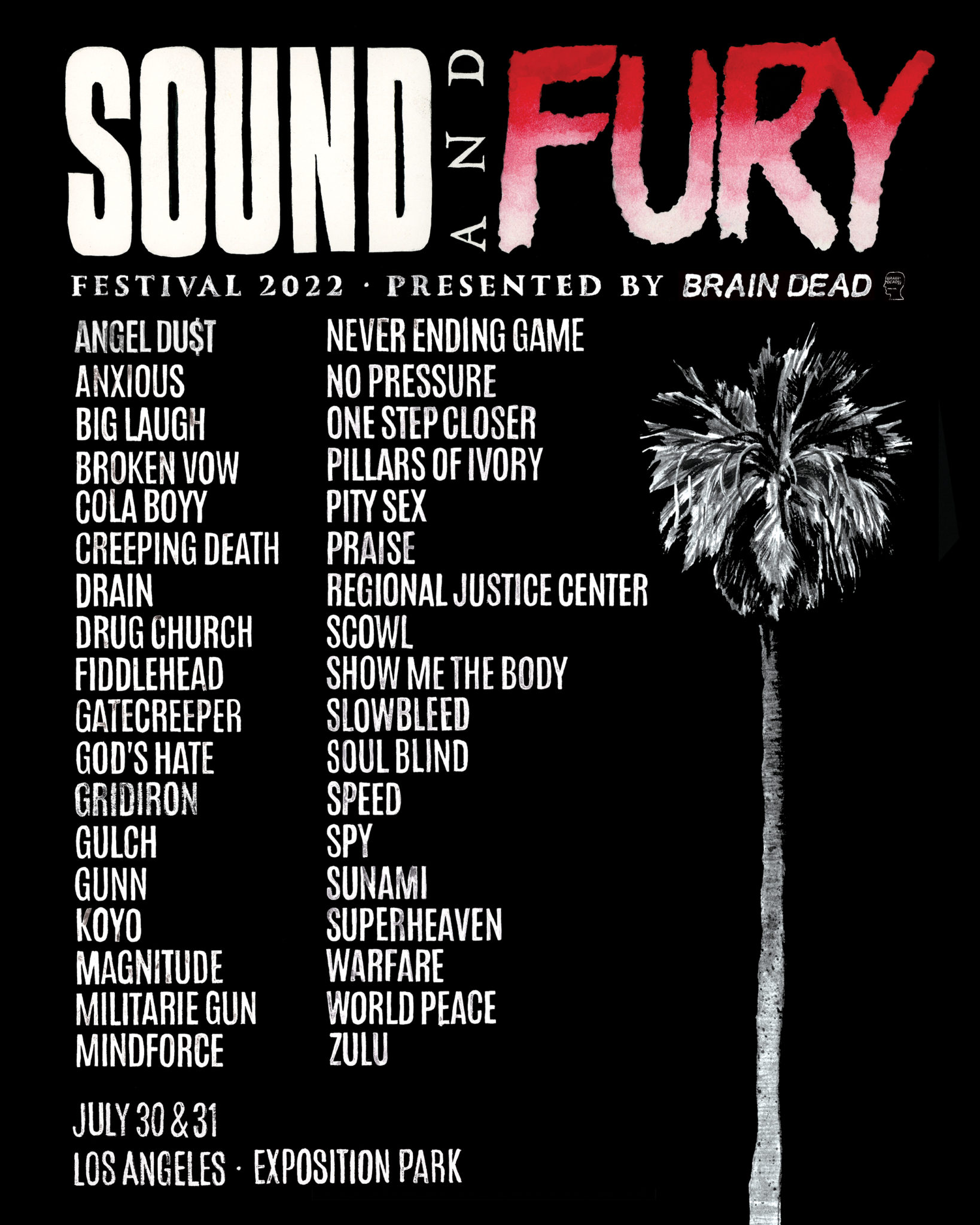 Back during the initial rise and eventual takeover of Donald Trump as President of the United States, there was a creeping feeling that heavy music was about to trend angrier and more gnarled. Think back to all the dynamic DIY punk-laced music that came out of the ’80s Reagan years. For every action, there’s an equal and opposite reaction, and the hell and fury we were about to experience as a nation could only be countered by the grizzled, marauding sounds of punk, hardcore and metal.

Not that these sounds were ever absent from the DIY sphere; it’s more that a renaissance was fast approaching. Soon, the entire scene exploded full throttle. Video series Hatesix became a YouTube sensation, showcasing all the latest and greatest up-and-coming acts from the punk and metal gutters. Acts like Gulch, Drain, and Xibalba would cultivate a captivating DIY hardcore scene in San Jose and the Bay Area. Eventually, bands like Code Orange, Knocked Loose, and Turnstile would all break mainstream. The only thing that could possibly slow down the momentum would’ve been a worldwide pandemic. Shit.

But even then, the onslaught of COVID only allowed the appetite for destructive music to fester and grow. As it turns out, being forced to isolate indoors for several months on end can absolutely send any normal human being into a rage-induced panic spiral. Thankfully, these bands and artists who toughed it out through that stretch were the antidotes we needed – that little pinch of catharsis that kept us sane and motivated for the time when things would go back to normal and we could all just throw ‘bows and flying windmills into a chaos-stricken mosh pit again.

Well fans, the time for that has finally arrived. In less than two weeks, the absolutely stacked Sound and Fury Festival returns with some of the greatest punk, hardcore, metalcore, post-hardcore, metal, emo, and alt rock artists in the game in tow. On July 30-31, Los Angeles’ Exposition Park will play host to a lineup of acts that you won’t sniff anywhere else in the U.S. The bill is like a “who’s who?” of snarling Hatesix All Stars. From headliners like NYC noise bruisers Show Me The Body and LA beatdown legends Terror, to the recently reunited emo purveyors Pity Sex, to the final show from San Jose superstars Gulch, and even the lithe, tropical indie pop sounds of Oxnard’s Cola Boyy, there’s a little something here for everyone. In fact, there isn’t a single act on the lineup that isn’t excellent.

This makes previewing Sound and Fury a little complicated. There’s no wrong answers here, but below, we’ll do our best to point you to five of our most anticipated acts on each day of the festival. So lather up that sunscreen, be sure to stretch before hitting the pit, and let the chaos reign!

One of the quirkier bands on this lineup, Angel Du$t is a Baltimore-based supergroup featuring members of Turnstile and Trapped Under Ice. Quite frankly, their music is beautifully all-over-the-place. While there’s definitely some standard melodic hardcore to their sound, they experiment well beyond that with minimal alt-rock, pop rock, even dashes of indie pop here and there, very much in the vein of bands like The Lemonheads, Elvis Costello and the Replacements. There’s no telling what exactly you’ll get from them, but whatever it is, it’s gonna be awesome.

Hailing from Albany, NY, the quintet Drug Church formed back in 2011 and have kept the same lineup intact since. In that time, the band has become critical darlings of the scene. They mix classic hardcore punk with alternative rock, grunge, and elements of post punk and post hardcore, along with lyrics that are noticeably darker and more sardonic than those of your typical hardcore band. Their most recent album Hygiene was released this year to great acclaim. Expect a rousing and moody set at Sound and Fury.

Fiddlehead is a supergroup formed in Boston in 2014 and containing members of bands like Have Heart, Basement, Intact, and Big Contest. Last year they released Beyond The Richness, one of our favorite albums of the year and an incredible showcase of supercharged, singalong-inducing indie punk and emo-tinged hardcore. The band rarely tours due to singer Patrick Flynn’s full-time job as a high school history teacher, so this set is absolutely a must-see if you’re trying to scream along and dive headfirst into a throng of verbose fans.

Traveling the furthest of any other band on this lineup, the Sydney-based Speed are the most hyped up-and-coming prospects in the entire Australian hardcore scene. Their defiance and opposition to racism, oppression and tyranny in society are prevalent themes in their music, and underscored to potent effect on their most recent EP Gang Called Speed, which was released last month. They’re known for their raucous live shows, and the rarity of them touring the U.S. and stopping in L.A. makes them a must-see.

Having recently reunited, the late 00s-early 2010s DIY alt rock titans Superheaven will make their grand return with one of the fest’s most anticipated sets. Firmly channeling the shoegazy, grungy textures of the ’90s, the suburban Pennsylvania group just played their first show back last month at Outbreak Fest in Manchester, England and will look to continue their comeback trail with a towering inferno of languid, explosive guitar riffs and crunchy rhythms contained within their albums Jar and Ours Are Chrome.

Phoenix, AZ band Gatecreeper are reinventing the death metal sphere on their own terms, and have done so with a prolific output of throat-shredding, stomach-churning records. That includes their albums Sonoran Deprivation and Deserted, as well as last year’s acclaimed EP An Unexpected Reality. In a live setting, the band’s whirlwind rhythms and cacophonous, dissonant vocals conjure a corrosive and bilious atmosphere that will encourage fans to engage in all sorts of debauched hedonism. Be sure to save your voice, because when this set ends, it’ll be gone.

Gulch is hands down the number one act to see on my list for the whole weekend. My love of this band knows no bounds and goes way beyond their scene-defining 2020 classic Impenetrable Cerebral Fortress. I’ve watched all their live videos, listened to all their records, and have concluded that Gulch is without question the best hardcore band of their generation. PERIOD. Last year they threw the San Jose show RBS – possibly be the greatest DIY hardcore shows in music history, and just like all legendary hardcore bands, Gulch are currently breaking up. Their festival-closing set at Sound and Fury will be their last performance ever. So even if you’re a little feint of heart, Gulch is a can’t-miss. And if anything, you’ll be able to say you were there.

More “sound” than “fury,” the excellent early 2010s emo band Pity Sex will bring a heavy dose of much-needed melody to the proceedings as they get set to perform for the first time in over six years. This being a reunion set definitely makes Pity Sex one of our most eagerly-awaited sets, as we look forward to their unique swirl of alt-rock, dream pop, shoegaze and noise pop. A welcome respite amongst all the dissonance and terror that’ll certainly be on display.

One of the most unique bands in hardcore, and who specifically experiment within the subgenre of powerviolence, the spastic Los Angeles/Seattle band Regional Justice Center are guaranteed to deliver one of the most devastating and cutthroat sets of the weekend. The Ian Shelton-led band is infamous for their confrontational and unrelentingly intense sound, characterized by a blend of aggression, speed, and thought-provoking lyrics. Just check out last year’s short-but-savage LP Crime and Punishment for evidence. We can only imagine how insane it’s gonna be live.

The elder statesmen on the lineup, Los Angeles legends Terror have been omnipresent over the past couple decades, providing great inspiration to young up-and-comers and wielding a great deal of influence over the current scene. Their brand of beatdown hardcore has definitely rubbed off on plenty other acts on the lineup, including Bay Area folks DRAIN, Sunami and SPY. Their new album Pain Into Power is another instant-classic, and we can’t wait to see them lord over the festival like the hometown titans they are.