A chat with Night Manager 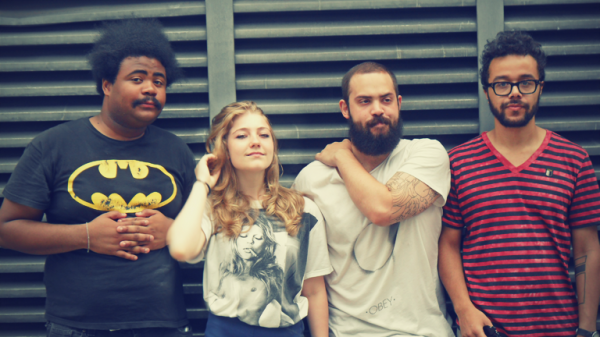 I guess I should ask about your band name.

TA: You should ask about the band name.

EE: I think my mom might read this interview. Shout out to my mom. “Night Manager” is actually an unpublished Hunter S. Thompson book that never came out because it was unpublished. It was about when he was night manager at a strip club in San Francisco, which was the first strip club I ever went to when I was a kid. I was 18. My sister's boyfriend took me there at like 11 PM, and I got this lapdance from this fully-formed, totally mature woman, and jizzed in my pants. And so, Night Manager is really an homage to all the millions of lives that were lost in the grooves of my corduroy pants.

You were wearing corduroys?

TA: Find a better backstory for a band name than that.

So you're from San Francisco and Paris.

Oh, then it seems like the blogs ignore you two. So you 'met in the middle' in Brooklyn – kind of in the middle for you – so how did you guys meet each other and decide to form a band? What is the origin story?

Ezana Edwards: We met at school, I don't really want to say what school – I'll tell you but you have to omit it because I hate that fucking school- you know, you can say the name if you say I hate the school.

What if I omit the name AND say you hate it?

EE: Yeah, totally. That school has, as far as I'm concerned, a pretty shitty music program. Me and Tim and Cait met in the jazz program, and I met Tassy in acting class.

EE: We started it between us initially, probably a lot out of disillusionment with our music program. I was getting, like, way too much money and pussy playing jazz, and it started to get exhausting and I wanted to get back to my roots

DAT: Of being broke.

EE: Of being a broke asshole.

Did your music major instruct you in how to get money and pussy or no, not at all?

DAT: I mean, that's what the degree says.

So when did you officially become a real thing and start recording?

EE: We [Tim and I] wanted it to be a duo at first but neither of us can fucking sing.

CS: So then they found me and we had a gig and we were like, 'that sounds pretty' and we called Tassy like five days later, and we got this gig and had like five songs, and that's how we started, I think. We recorded at home.

DAT: I actually had to blow a math quiz to jam with them a couple of times.

And you played at SXSW.

DAT: It was just really cool; I like Austin a lot. We vibed there.

TA: Yeah, I felt immediately like “I could live here”. I feel like you don't get a really good sense of the city from visiting…

They have good tacos, I hear.

TA: Exactly. That definitely had a big impact.

EE: The driving was fucking insane. We drove to Texas — only Tim can drive.

TA: I had my girlfriend come to help with driving, so it's like five of us in a car and all of our gear, and it's an old-ass car and it's totally not meant to accommodate that many people.

EE: Tassy was getting boners right next to me and farting…

Everyone I've talked to about touring says that the worst part is driving and, if it's a band with a lot of guys in it, being in a small space with guys that much because everyone becomes disgusting.

CS: They talk about fast food and farts a lot. It's hard to be the only girl here.

So you've been playing a lot of shows in Brooklyn; do you have any tour plans?

TA: Not really anything solid, we kind of just do one-ops, really, like we went out to Boston before and Connecticut; we're doing something in Baltimore at the end of the summer, but we don't have anything really set in stone.

EE: I figure we'll wait until the record actually gets released. We're actually in talks about doing another 7″ with this Japanese label. One something actually physical gets released we'll probably start.

TA: Musically, I would say –

TA: The Pixies, My Bloody Valentine, Slowdive, all those 90's shoegaze bands

All of your bios say that you love 90's music and hate bios. Do you actually hate bios or is that just you being lazy?

TA: It's definitely at least 40% us being lazy. But, really, what can you really say about yourself in a bio?

TA: Anything you say about yourself is probably going to be inaccurate.

Speaking of things that might be inaccurate, is is true that you can all do backflips?

EE: Do you want us all to do one right fucking now?

DAT: Give us a couple more drinks, and we will.

EE: Can you do a backflip on the trampoline? You know how there's always that kid who can jump over his own leg? I can do that.

TA: I could do a backflip in a pool.

TA: I could fly underwater.

Since we're in a karaoke bar, if you had to do a karaoke version of one song to represent the band, which would you pick?

TA: “Fat” by Weird Al. [general enthusiastic sounds of agreement from the rest of the band].

He just had a new CD come out.

TA: Yeah, I wanted to go because the tour was kicking off in New Jersey, but I just couldn't get anyone excited enough to go. No one wanted to pay $60.

He played in a lot of casinos.

TA: I went to, like, five Weird Al concerts.

Is he an influence?

TA: Totally. Weird Al's a lot like us, I think. Weird Al sits around — I mean, if I had cable, I'd probably watch a lot of TV and I bet he watches a lot of TV, and even though he's funny he's kind of disillusioned about a lot of people and their attitudes.

EE: Yeah, the accordion scene is not what it should have been, I guess.

TA: And the band rocks, too. They totally tear it up.

EE: Well, you can't compare anyone to us, obviously. But I really like Total Slacker. Sweet Bulbs are really great. We're playing with the So So Glos on Friday at a record release. A lot of bands I like are from Philly, too.

I really like Slutever's kickstarter campaign; their rewards were very inventive.

EE: I didn't see their rewards.

They don't really have any money at all, so they can't give you anything, so it was very DIY. Things like “if you give us $5 we'll prank call your ex boyfriend” and “if you give us $50 we'll go bowling with you.”

TA: We did a tape release show – it was us, Xray Eyeballs, Sunny Ali and the Kid, and Teen Witch – and the first 50 guests got a compilation tape from everybody, but they had these special golden tapes where you got some prize from one of the bands. Our prize was that me and Tassy were gonna give a body massage to whoever won, but then some 14 year old girl won.

So you didn't give her the body massage?

DAT: We don't have good lawyers.

TA: If me and Tassy were facing a grand jury, we're done.

If you could be on any reality show, which one would you want to be on?

EE: If we could all be on Puffy's making the band…

TA: Puffy's a big influence on our sound as well.

EE: And visually we try as hard as we can to approximate the sequined windsuit of the 90s with an air machine.

And then you all do backflips.

EE: In that Puffy video where they have the flying and the wind machines —

EE: You know they couldn't make that video when he was alive.

TA: He would have been laying on the ground.

EE: Fuck Biggie Smalls. Put that in the paper, man!

Okay, on the subject of music videos, if you had endless resources and could make one, what would you do with it?

EE: What would happen in the music video? It would be super long, if we could make it.