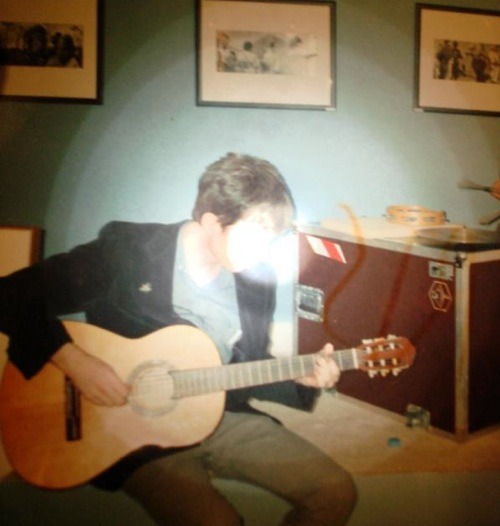 From his lo-fi recordings of the early nineties into the second half of his career, Bill Callahan's crooning has become impossible to mistake, and his position as one of our finest songwriters solidified. Callahan has succeeded in maintaining a low-profile while taking on a persona that owes much to names like Cohen, Van Zandt, and Hazlewood.

Since leaving Chicago for Texas, Callahan's music has adopted a sunnier tone. Considering that the many measure the man's deadpan delivery as an indication of sadness, his newest album Sometimes I Wish We Were An Eagle (Drag City) functions as an invitation for reinterpretation. Rather than foray into a new musical direction, Callahan continues to establish himself as one of the most enduring and creative figures of American music in the last twenty years.

A few years ago you made the move to Austin and started recording under your real name. Did you feel like you just needed a clean break?

Well, yes. It took me awhile to make it. It was a big move for me, since I didn't know a soul in Austin and I'd only spent a few days there in my life. So, it took a little time to bounce back from that shock to the system. But I did make one more Smog album. Even though I wanted it to be a BC album but I expressed this desire too late for my record label to embrace it. But that album is all about that time, the dearth of work and the feeling of floating down a river and exploring that river.

How much has the change in scenery [from Chicago to Austin] had an influence on you?

That would be hard to quantify. It's hard for me to correlate what I produce with where I am. There is something kind of old and pure and desolate and wanting about Austin. It's dry and still. Brittle and meaty at the same time. There is something earthy about it. Like being close to sea level. It is still small seeming. You can go to the edges of it. Roads end and it just turns to dirt and Longhorns staring at you. Other cities sprawl into nebulous edges. I think oceanside towns like San Fran, LA, New York — they all end at the sea. You can't argue with that. The cities go right up to the sea and then it is just water. The buildings here seem to want something. And it has a touch of ghost town to it. It's a pretty easy place to live. You can't find the hoi polloi even when you want to. But it did seem like home to me awfully quickly. There well could be a correlation, but I'm too close to see it, I guess.

I'm interested in the track “Invocation of Ratiocination” – it seems almost like it was improvised. How did that one come about?

I wanted a wild card track on the record, since so much of the arrangements had been planned out in advance. I wanted a little something that was just for me and just by me. It is supposed to be like an ocean. The basic tracks of the record are still pretty “wild card,” but I left spaces for the arrangements that were forthcoming, so I knew it wasn't quite complete. “Invocation…” is supposed to also cleanse your palate for the next track. It is a readying for the next song. I don't know if anyone cares about it. I like it.

Are the tracks linked at all other than just mere track progression?

They are connected. I didn't realize that when I was recording the record, and “Invocation…” started out sounding totally different. It had pounding drums and braying organ. When it became what it is now, I realized where it should be on the record. It is a head clearing and focusing song, a base to build the ideas of the next song on.

One of my all-time favorite punk-hardcore records is the split between the D.C. band's Faith and Void. Is the title of the song (“Faith/Void”) at all a reference to that?

It's one of my favorite records, especially the Void side, and I'd always thought the title Faith/Void was really succinct and beautiful. I'd written the song without a title and then noticed that it had the words “faith” and “void” in it, so I jumped at the chance. And I never looked back.

There is a very obvious progression in your work from the more lo-fi approach to the point you are at with the new album. Do you feel like this is a sound you have been shaping over the course of your career?

No, I don't think I'm on any kind of clear trajectory with the sound of my records. I'm pretty erratic, soundwise. Because I'm interested in all sorts of ways of recording. The hasty and the considered. And I always have a different idea of what I want and what I'm going to do. So the sound of my records is scattered when taken as a whole. Each one is independent of the last. I guess it'd be nice to say that this record is the sound I've been working towards for 20 years. In a way, it is. It is one sound I've been working towards for 20 years, but there are others.