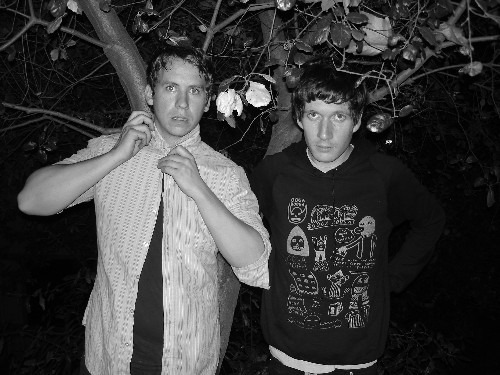 Randy Randall and Dean Spunt were still teenagers when their seminal California hardcore trio known as Wives signed a record deal and began releasing albums and touring both America and Europe. After losing a member a couple of years ago, the duo (drums, guitars and vocals) now working under the moniker NO AGE have released their first proper album, Weirdo Rippers via Fat Cat Records. Weirdo Rippers is essentially a collection of songs from the bands recently released 7” and 12” vinyl. With plenty of tracks available only to those cool kids with record players, the hunt is clearly on for fans of art rock’s newest arrivals. I had a chance to talk with Randy and Dean this past Memorial Day as they prepared to leave for their most recent tour of Europe.

What are you guys doing for Memorial Day?

Dean: We’re just catching up on some band stuff, like answering emails.

Dean: Yeah doing interviews, important shit that we haven’t been able to do.

What kind of touring has NO AGE done this past year, outside of LA and SxSW?

Randy: Yeah we did that; and then not real big tours. We flew out to New York to do a couple of shows there and then we went to England for ten days, so I guess that was kind of a big tour? We did an East Coast and West Coast thing last summer, but no Mid-West dates.

Is Weirdo Rippers coming out on Fat-Cat in the UK as well?

Randy: Yeah it’s going to be Fat-Cat for both the UK and North America.

How did you get hooked up with them?

Randy: They were really awesome, they came to us early on and they had heard of us and we sent them some records and they really liked what we’re doing.

So all the tracks on Weirdo Rippers were first released as tracks on 7” singles?

Dean: Two of them were 7” and three of them were actually 12” EP’s. And they all came out pretty much around the same day or couple of weeks. All five of them were on vinyl, and that’s the only way they exist. We wanted to have the stuff on vinyl for awhile and then see what happens. I don’t think out first thought was to release them on CD so quick. I think originally we though that we would compile every single song on a CD in a couple of years or something, but it just came that we should just highlights from all the EP’s and put them together on a CD. It just seemed like it was a better move, more fun and we got to work with a label like Fat-Cat.

Randy: All the vinyl came out at the end of March beginning of April. We originally had it scheduled so they would be done at the exact same time, but you know as production schedules being as they are, it was staggered. We just formed as a band about a year ago.

After Wives disbanded and the two of you decided to stick together, did you ever consider getting another member?

Randy: We knew it was going to be us, and then we just went from there and just sorta started writing stuff, I don’t think it was ever like we had to add somebody else, right Dean?

Dean: Uh, yeah? I mean I think I knew we were going to play together and I think it was just easier to play with just me and Randy. Being in Wives and stuff, we kind of knew what we type of music we wanted to play, and it just seemed easier. I mean we’ve played with other people like practicing and jamming, but it just seems to work a lot easier with just me and Randy.

Are there any song that you’re performing live in you set that didn’t make the Weirdo Rippers cut?

Dean: Not so much, we [have] some demo stuff that we’ve been making that we haven’t recorded yet. Basically all the vinyl stuff, there’s about eighteen songs, and then Weirdo Rippers is what, eleven I think? One of those is a new song that’s just for Weirdo Rippers; it’s not on any of the vinyl. So basically, when we recorded for the EP, we recorded all the songs we wrote, so now we’re writing new songs. So pretty much everything we have recorded is on the vinyl EP’s, and then about half the stuff is on Weirdo Rippers. So the vinyl releases still have an exclusive song that’s pretty much only on the vinyl, unless someone put it on the internet somehow?

What about kids who live in small towns that don’t have a cool record store or a record player and the internet and mail order CD’s are the only way the have access to good music?

Randy: I guess? We grew up kind of out in the boonies’, you know like, Dean grew up in San Clarita, and I grew up out in like Pomona and West Covina and I think we just sorta come from that time where stuff wasn’t always so easy. We know how the internet works but its like, just because it’s available doesn’t necessarily mean it’s cool? I dunno? You know what I mean? I’m not saying the internet isn’t cool, it just means that I’m not quick to pander to this thing where it’s like, “Alright, rad! We gotta keep up with what’s going on? I kind like what I like; I guess I’m an old man that way.

Yeah I went to high school in a really small border town called Calexico and all the record shops only sold Rock En Española and Mariachi CD’s – which was kind of cool but I had to drive like 150 miles to get a Pavement single.

Dean: But the thing is like, you appreciate those records way more. You know that Pavement album you went and drove and hunted down. I mean most of the songs are going to be available on MP3 and CD, but there’s those special ones for the people who are really like, “Fuck man! I went and searched for all five EP’s and I found the one, or my friend gave me a copy of it, or it was the last one at the record store. Some weird story that makes it that much more special, I feel like we’re way more into that idea than just having like, “Hey we’re on iTunes! Here’s all twenty songs!” No it’s like, hey you can get eleven of them, but the other nine, fucking you’re gonna have to find you know?

How did Cold Sweat Records treat you?

Randy: They were awesome, they were really nice. I think we learned a lot working with them and I think it as good experience just to see how the whole process works. Now we’re able to take what we learned there and do different stuff with it.

To someone who has never been to The Smell but has heard of it, how would you describe the club and it’s dynamic in the LA and national scene?

Randy: The Smell is the best all ages punk venue in the world, that I’ve ever been to. It’s a free open venue, and you never know what you’re going to find on stage on any given night. If you’re a fan of experimental music and general live exciting fun music, you would want to check out The Smell. It’s five dollars generally, most shows are never more than ten dollars, there’s no bouncers, there’s no bar. There’s a vegan snack bar and it feels very comfortable very relaxed. I feel like it doesn’t have the trappings of a lot of shitty clubs.

What has been the wildest show at The Smell in your opinion?

Randy: There’s this guy named Daniel who’s kind of like the security guard there, and we asked him to sing in this 80’s hardcore band that we formed and we played a show on his birthday and he sang and it was fucking crazy. We were called Mr. Wright and the El Salvadorian band, his last name is Wright, and he’s El Salvadorian. A shit load of people came to his birthday show and he gave this incredible speech about how much we meant to him and how much The Smell means to him, and he was really choked up and was kind of crying. Then we gave him all the money that we made that night and then we didn’t see him for two weeks.

Does he have a bad substance abuse problem?

Randy: We were like fuck man, we killed him! We were like freaking out for two weeks because nobody had seen him and then he just showed up and it was just like oh thank God.

Does he huff gold paint out of a sock?

Randy: He does something man? He used to always go in the bathroom, and after awhile Jim [the owner] would be like, don’t let Daniel in the bathroom. Because he’d go in there and he’s literally be in there for an hour. You’d knock he wouldn’t answer and you’d be like what the fuck? And then eventually he’d come out and it’d smell like that weird fucking smell.

Crack can be a very distracting substance.

When did you paint the name of your band over the front door of the club?

Dean: We painted that there for the record cover.

I wasn’t sure if that was there previously and you guys just spruced it up for the cover art?

Randy: Actually that’s a good story we can start to tell people. Actually we named our band after the front of The Smell. It was really rad, that was an idea we had for the album cover and I’m glad Jim let us do it.

Dean: It’s still up there.

Randy: It’s still there, I dunno, he said we could leave it up for awhile.

Dean: People keep writing us, “Hey were driving by The Smell, did you guys open up a store? What the fuck is that?”

Randy: People were tripping out when we were painting it, “Are you guys fixing this place up?” No we’re just painting it.

Would you say there is a cohesive them running throughout Weirdo Rippers?

Randy: A literal one.

Dean: I guess like, one thing we really wanted to do was to try and get every song to sound different, or we recorded every song differently. So everything should kind of sound unique, like a weird mix tape, like it all sounds kind of different.

The one song that stands out on the album for me is “Neck Escaper.” What’s that about?

Dean: I feel that it’s a strong song, and I have a hard time explaining lyrics, but it doesn’t really mean one thing or another. The title has something to do with Randy. The final Fat-Cat version of Weirdo Rippers will have lyrics to every song.

Does NO AGE have a message for the children?

Randy: Yeah, start your band. Go start a band because the band you start will be better than ours.