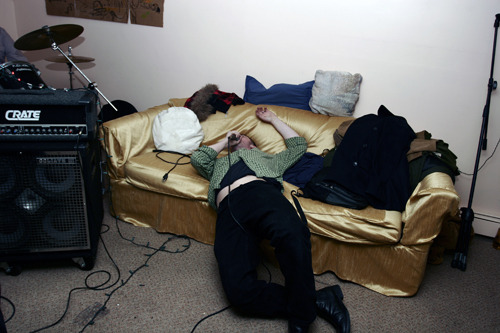 [Say No! To Architecture]

Allen Roizman, (aka Say No! To Architecture), picks us up from the Hicksville, Long Island train station in his black Toyota. Two members of Orphans (average age: 17) wait with him. The short drive past cement factories and a town center of neon signs and mom-and-pops lifted sleepily out of the 70s eventually bring us to Roizman's parent's house, a blue ranch on the corner of Prospect and Cedar in Plainview, New York, where he lives in a basement apartment. Today marks the final show here, the previous event having ended abruptly with Roizman's mother descending the staircase in bathrobe and curlers to cut Goes Cube's set short at around 2am. Afterwards, Roizman promised to stop making his goddamn racket, for good. The day we arrive, his parents are gone, and he's organized a secret sending-off for his basement apartment, restricted by the curlers-that-be from ever being a regular performance space again.

Roizman has grown into a central figure within a geographically and sonically disperse group of musicians and acts called Ghost Hunters Club Co-op. The co-op began as a concept between Roizman and Michael Wieder (who operates under the moniker James Kiwi). Like many others, they were cowed by the notion of competing in an increasingly commercialized independent music world on their own terms. Opting out of pursuing experimental labels and the corresponding press hounding that would follow, they formed, for lack of a better term, a loose coalition of the willing. The bands and musicians who played in early February in the Roizman's basement — Hidden Things, Fucking Hell, Orphans, Long Island Drone Orchestra, Say No! To Architecture — hold the curious distinction of having little to no cache whatsoever in the independent circuit, but nonetheless possess the privilege of association with a group of more than 25 other bands spread along the eastern seaboard.

“Ghost Hunters Club is a family of different d.i.y. weirdos who can't really advertise themselves to the world in the way that most people can, via buying lots of ads in magazines or whatever, I don't know, expensive stuff…” This is uncomplicated idealism at work, and while it's resulted in a community materializing today in Plainview, it's also a template for something larger. Roizman fantasizes a nation of Ghost Hunters. “Horrible example: really strongly concentrated street gangs that have different levels of organization that work completely separately from each other. Los Angeles Bloods will never heave to deal with Brooklyn Bloods.” Rival Vampire Slayers?

We arrived at around 1pm, and Sparks and Sam Adams and cheap white wine were promptly popped, uncorked, imbibed. Bowls were packed, PA systems and suitcases of electronics unloaded into the carpeted room with the mirror-paneled bar. Cold light from the narrow basement window cut the space in half, and as Roizman put on an old Tickley Feather 7″, a small group of people began to coalesce in pockets of his three-room basement. The proportion of friends to performers was about 1:3, and there was perhaps only one friend who wasn't armed with her own camera. As it were, anymore acts and there'd have been very little space for furniture or instruments. Everyone stood or sat reverentially paying dues to each other's acts, which ranged from Hidden Things' bare, acoustic folk to the squelching sample-freakouts of Orphans and the ruminative, silk-spun improvisations of Cory Larkin (LI Drone Orchestra). Between sets, the kids wandered between Roizman's flyer-bedecked walls, playing with the oddities scattered throughout (fake worms-in-a-heart, windup cars, mini-bongs, mom and dad's liquor cabinet) and sharing the countless other projects they've involved themselves with: Julian Bennet-Holmes of Orphans drums for Fiasco, Josh Millrod of Hidden Things recounts his noise projects, Cory Larkin (LI Drone Orchestra) is getting deep into La Monte Young-styled composition with some Long Island locals.

At 22, Roizman is one of the older performers, and his ambient, cyclical music bears marks of an impressively matured aesthetic sense. Layering guitar through a relatively simple arrangement of effects pedals, he achieves a heavy mass of texture and static, generated from percussive guitar stabs rooted in structured song-pieces. He documents his work on old tape players, a dogmatically lo-fi approach that lends his recorded material the aura of something glowing warmly in the distance. He has a number of these releases, including the Psychic Teens, an LP soon to be released digitally on Ghost Hunter's website

All of this could be (and is) just another day in the suburbs. And no matter how experimental these acts are, they are indeed suburban garage and/or bedroom bands, in the purest sense of those terms. “A lot of the Long Island-based artists have a kind of similar ambient texture to it, with a lot of fuzzy noise in the background, spaced out vocals and distorted guitars. It does come from being stuck here in the suburbs: we're all kind of just stuck here out of age or financial situations. We don't really have much of a choice, and our parents kind of expected us to go away to college and get degrees and well-paying jobs and get another house around here but they don't realize that's not what it's all about.”

But the difference today is that these members of Ghost Hunters Club are from all over the tri-state area. This isn't your high school's battle of the bands, it's a curated collection of experimental acts that just happen to be meeting somewhere in the New York area that isn't Brooklyn. Local scene publication Showpaper has recognized GHCC as such, reporting regularly on their Long Island shows. And Roizman isn't taking any sort of polemical stand against the more established d.i.y. powers that be in New York; he's hosted a series of GHCC showcases in the city, including two at the Knitting Factory. (That being said, he's also been banned for being too loud from Pianos and Cake Shop).

What Roizman fantasizes as a nationally-scaled GHCC, in which disparate chapters operate autonomously of each other, isn't all that far-fetched. We could get excited about MySpace and the internet at large allowing these dispersed collectives to form and to ferment free from the constrictive expectations of the music industry, or even from the more competitive d.i.y. scenes in central locations, like nearby Brooklyn. But while electronic communication certainly eases the logistical burden of people who, like Roizman, are building their own music community around them, the fundamental impetus for GHCC remains a lot simpler than that: to celebrate new, strange music.

Disclosure: I first became interested in GHCC as a writer: it was a microscosmic example of a national phenomenon rippling through the bedrooms and basements of America. As a musician, I became interested in GHCC as a place to contribute my own weird music. I should thus mention that not so long after writing this article, I began to collaborate musically with Mr. Roizman, and continue to do so presently.