Grass Widow Write Their Own Mantras 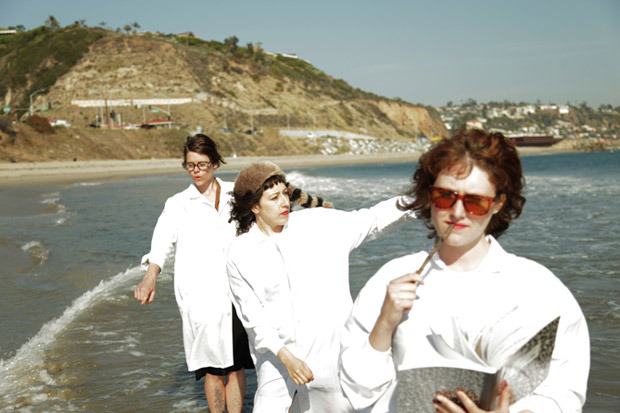 Grass Widow, the trio of Hannah Lew, Raven Mahon and Lillian Maring, have been surfing on the brighter edge of post-punk for a few years now, careening intricate, catchy guitar tunes through woven vocal harmonies. The band's third proper LP, Internal Logic, dropped Tuesday, May 29 on their freshly minted own label, HLR. It picks up where its predecessor Past Time left off—driving, unforgettable, relatable, and bright. When Lew picks up to chat with me, she’s walking the streets of San Francisco, the city Grass Widow calls home.

I’m walking to our distributor to put the barcodes on our new record.I’m about to see it for the first time.

You have to do that by hand?

Yeah! Someone’s got to do it. I mean, we could just pay someone by the hour to do it but I’m so excited to see the record, I’m just going to do as much as I can.

Why don’t they just print it on there?

You have the option of doing shrink-wrap and putting it on the outside, not putting it on the actual artwork. This time around we had done all the album artwork and submitted it without an actual barcode. I prefer this. Putting a bar code on a record makes more of a sales statement. Like the listener is a consumer. I guess in some way it artistically hurts my sensibilities.

Did you design it yourselves?

We designed it ourselves but we had a friend do some lettering, our friend Caitlyn Galloway, who is a sign painter here in San Francisco. Our friend Cody Blanchet helped us with the layout. But the design, we’d been thinking about it a lot, all the elements together. The whole moon concept was really spontaneous. It was weird. Like, part of the subject matter we had been talking about a lot. And then we tried it and were just like, “Woah! That is the record cover.” It just kind of happened.

The record is space oriented?

A lot of the unknown. There’s a lot of outer-space energy in the lyrics and just the general vibe of the record. There’s also some moon imagery in there and kind some personal mythologies that have to do with the moon. It just seemed really natural when we played off that image. It’s also just kind of ballsy because it’s just like: It’s the moon. It’s also very universal. No pun intended.

<p>Something everyone can recognize. A mystical thing to most.

Yeah, something that everyone has an idea about and symbolizes this hope and the acceptance of the unknown. There’s just kind of always this giant circle up in the sky that we don’t really know about—but we know it’s there. And we’re fine to think that stuff is or is not happening up there. But who knows? It could be some like a Truman Show thing. Maybe it isn’t this whole myth that we have about it. Maybe it’s just a projection. [laughs] But I think to us it’s just a symbol of hope. And a lot of the songs on the record are really hopeful. So it kind of sums that up.

And that’s part of your internal workings, an acceptance of mystery and hope?

I wouldn’t say it’s like that all the time. I think we spent our last record [Past Time, Kill Rock Stars 2010] really trying to figure out some things and grappling with the unknown, going through a lot of grief and fear of the unknown. My father passed away while we were writing that record. It was an inescapable subject matter. It went from internal logic to outside mystery. You have to say, “Hey, there’re a lot of things I don’t know and that’s okay.” I think that during Past Time we were really just trying make some kind of narrative with this giant question mark at the end, that no one’s ever going to know about. People just don’t know what happens after you die and I wish that wasn’t a thing staring us in the face during this whole writing period, but it was. When it came to write Internal Logic, we decided we had to write songs that feel really good, are really hopeful and feel really good to play every night on tour, to give ourselves a gift within our craft. So that’s what the record is. Pretty much every song has a mantra in it to communicate hope and keep doing what we’re doing.

When you titled this record, was it intentional to keep it one letter off from a common phrase, just as with Past Time?

I think “internal logic” is a common phrase.

I had always heard the phrase “infernal logic.” I think it’s a biblical thing that speaks to the machinations of evil.

I’ve never heard that. But I’m Jewish. I was raised without the devil. The reason we named the record Internal Logic, it was based on something Tobi Vail wrote about us last year. It was probably the most spot-on thing anyone has ever written about us. I feel like we were really seen for the first time. She was describing our multiplicity in a way where we’re these three individuals, which was something she picked up on and we had never really articulated or thought about before. But the three of us really have an internal logic in our process. When we’re writing a song, there might be eight counts in one part for Lillian but there’s four for me and there’s three for Raven. We’re always writing and thinking like that and the three of us come up with our own lines and we’re singing completely different things. That’s really what makes up our band. Each one of the three of us has our own internal logic in understanding and relating to the songs. And I think that is really a strength for us. It’s kind of like, we have our own way of doing things. And that’s a huge part of our character and something that just really makes sense.

You’re saying the three of you are counting on different meters in the same parts?

Yeah I don’t even understand what those two are doing sometimes. But that’s the thing. We don’t understand what each other are doing sometimes. But we only understand it within our own logic. And we don’t always agree. We sometimes disagree. And then we write our own thing. We can agree to disagree within any given song. We’re three individuals. It takes such a long time to write songs because sometimes in the process it will just take quite a while to wrap our brains around what other people are doing and then make up our own internal logic that we can join in on the song. I honestly don’t know how bands do it, where there is one main person and everyone else just sings along to their life story. I couldn’t do that. I don’t think any of us could. We’re making our own stories together. If you heard us talking at practice, it would not make sense.

Can you tell me about your new label?

We started our own label called HLR, I bet you can guess what that stands for. We’re really just putting out our own stuff right now. We’ve worked with a few labels and at this point we were just like, why not do it ourselves? We know exactly how we want to do things and who we want to work with. You know, I would say that al bands should do it, but it costs a lot of money. We had to take out loans and all of our band funds from shows goes right to our vendors and all the production costs. The thing is, when you put stuff out with a label they pay for that stuff up front. But then you kind of share the ownership and the glory of that music for the rest of your life. We just didn’t want to do that. We felt so strongly to a point about the new songs we were writing that we couldn’t even bear to share any of the glory or any of the money with anyone else. Working with other labels was a great learning experience, but at this point, as a band, we decided, “You know what, we’re going to do our own thing.” And it feels really good.

If the record does well, we’ll make more money, as we’ll get 100% of the royalties for the rest of our lives. There are so many people who aren’t artists making money off of artists. And that’s a given. But we were just like, we cannot do this to this record. No. We’re not going to share 50% of our profits with anyone no matter what. We just feel so strongly about it we want to be in complete control of it. We have good relationships with our distributor and our record-pressing plant and our booking agent. It’s not like we’re doing everything ourselves. We are mining out some of the work. But we’re completely involved in every aspect of the music and it feels like it’s doing it justice.

What about playing for gorillas?

That was a funny thing. I met this woman, Laurel Braitman, at a wedding. We just really hit it off. She’s been writing a book about animal madness. She basically is advocating for animals in much the same way that I argue for women in my work. I feel like we really hit it off. I just really felt that analogy where it had a lot to do with desire and all these things. She’s basically of the mindset that animals are not defined by their species, they’re individuals. This specific group of female gorillas in the Boston Zoo had expressed taste. And Laurel was interested in the question, “what do they like?” Not just, “what do gorillas like?” But, “what do these gorillas like?” and just kind of taking a humanist approach to animals. In a lot of ways, the things that she’s working on, for me, are really more about humans. I think when people study animals, they’re really studying human behavior at the same time. That was really interesting so we decided to bring entertainment to some animals that are usually the source of entertainment. That reverberated to all the things I think about feminist theory and how a lot of the time women aren’t included in the audience and we’re the entertainment, but there isn’t music and movies and media that’s really made to entertain women. It really was an experiment for us. We know how humans act at shows. You play a show, you play your music. People are standing, at best some are dancing. It’s almost rude not to stare. It’s just this weird dynamic where you’re the entertainment, and when just thinking of that as a given, it’s really odd. But gorillas have such a different way of expressing likes and dislikes. So that was interesting to take our music into a totally different context. I think a lot of people have seen the video and thought, “they don’t really look into it.” But that to me says more about those people who expect these animals to gather around as humans would—they express their desires differently.

Internal Logic is out May 29 on the band’s own HLR label. Grass widow hits the road in support of the album May 30. Tour dates are below.