The psychotic tour journal of Dntel 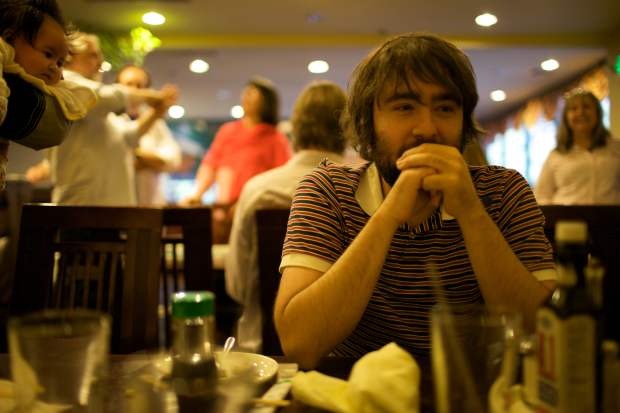 You know how in magazines like Entertainment Weekly they’ll occasionally have an excerpt from some hot new novel (usually by Stephen King)? I’m hoping it’s ok if I do that here… On a tour about 10 years ago, everyone in the van got blank journals and we had a contest to see who could fill it with the most psychotic content. I just found mine and thought I would debut it here with an excerpt. It’s from the point of view of a mentally disturbed man who lives with his sister and is obsessed with killing mice. I wish I had titled it but I didn’t. I think it would be cheating to come up with one now, so we’ll just jump in…

“THE mice blood is red inside except not black like bugses parts but bugs do not bleed and make it feel as good. So I like the mice a lot better and I try to find more now but maybe they want to hide because they can’t see crying about they’re sister in front of the people. But sometime I can’t sleep as much still all the time with just one mice for a day and a night. I want to find a whiter mice to incept the red.

I can maked a trap a mice trap but I saw a one before that kills it but I will make it to keep it alive and the whitest. You took me to the store and I buy you no you buy me my “usual” and then I you buy me all the pieces to build the mice trap. You get your eyes weird but then you still buyed it.

Now it’s all made into a mice trap and I look into it all the time inside to see a mice as white as possible but a lot of the time it's empty until Friday where it has a mice in it. It's not whitest but it's brown and grey and not red so I pushe my thumb into its head and it rolls underneath in the side of my thumb but it can’t get out of my way so I put my palm hand onto its head and it unbuckles the mices head but inside. Not all red so I keep it until it's night and you already went to sleep after we watch TV and ate dinner and you came home after you went to work. And when I pull on it hard this time its blood comes out and when I’m lying to sleep I hear the brother of the mice crying but I forgot to put the mice trap again. I think it's probably the whitest from its crying. I crawl in the dark but I don’t see the mice hole until I should look behind my bed and drawers of clothes tomorrow so I don’t wake you up…”

“So how does it get out of its house? I think there is a door to the mice hole. But I will make the mice trap open and it will come out of its house to smell his sister when she is gone. It's sunny and hot today and I lie in the grass unshirtless and feel luckiness to be so happy all the time instead of thinking of your hair and head holding in my hands. The mice hair is more the whitest so it makes me happy…”

“Today it's longer, by 3 days or 4 days and I lied in the grass. It's cloudy and remembering me like the mice. One is the shape of it and I put red in my brain to it. I think for sure it was next to the mice trap last night smelling his sister go away but it ran if I snored probably. I could hold my breath I tried it in the grass but I can try it tonight when I’m sleeping.

But it’s quiet tonight because the brother maybe killed himself in case it hurt too bad by now. It could get less white when it's killing himself, I should save him early, tomorrow when you’re at work I’ll save him even if he kills himself before now I can still see how white it must be….”

“You come home tonight unhappy in your job today it was bad again and I hammered in my room to make a mice door open but no mice was in it or behind. And you see it and yell and tears are out of you but when I see crying it would make me feel bad but now it makes me think of breaking a part of you off. Mice ghosts are in my room now in the dark and it’s more reasons to be awake all the time and I can sleep in the sun instead and let the sun heat it out of me.”

Unfortunately for the world, I never finished the story. It ends with the guy and his sister on vacation at a hotel and he meets a girl. I’m not sure where I was heading with it. I also can’t remember if I won the psycho journal contest…