JEFF the Brotherhood Take it Easy 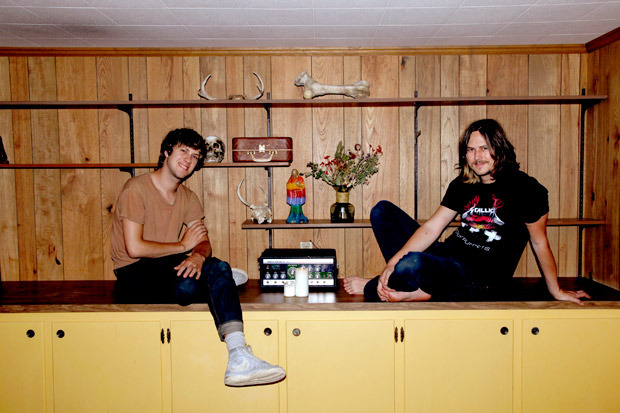 The last time I left off with Jake and Jamin Orrall of JEFF the Brotherhood, it was during the album cycle for Heavy Days at the tail end of 2009. They had just blown through several well-received shows at the CMJ festival in October, opening for Ted Leo at the Bowery Ballroom the night before playing a headlining gig to a nearly sold-out crowd at the Mercury Lounge. Still putting out records on their homegrown Infinity Cat Recordings, they were celebrating their first vinyl repress of Heavy Days, which was also the label's first ever repress. As stated on the title track from the aforementioned record “Things (were) going pretty ok”.

Fast-but-not-too-fast forward to July 2012: Hypnotic Nights, the band's first proper album on major label Warner Bros., is released to the wild. The record has been well received and they will be finishing up their US summer tour before heading overseas only to return and, at press time, presumably hit the road again. On top of that, they have just made their first appearance on Late Night with David Letterman, a considerable step forward in gauging the “success” of a band. The next day, as I congratulate them on the appearance, Jamin asks me how it was.

“Nah, we went and sang karaoke instead. We were in it, man,” explains Jamin, while adjusting the brace on his wrist he hurt while unloading his 2001 Harley Davidson off it’s trailer while back home. Jake comes into the room to sit down after taking a hangover poop.

This is one of the first instances, to my knowledge of a band not anxiously waiting to see their first appearance on national television to millions of viewers. But, JEFF the Brotherhood are not your average major label band. They would rather sing “Dixieland Delight” with their friends than over-inflate their egos. You could say this is JEFF in a nutshell, and also how their new album Hypnotic Nights came to be. It's just a super cool summer jam record that is polished up in that major label sheen but cannot help but be effected by the buzz-pop reverberation that JEFF have become known and loved for.

While most artists play the hyper-cool, nonchalant card, Jake and Jamin exude it by default. They are that rare combination of individuals where you have to second-guess their accounts of working with Dan Auerbach and his eccentric nature as good ole' boy grandstanding. Their posturing in recounting their experiences, however, conveys stories that could only be true.

According to the brothers, Auerbach would get so frustrated with them sometimes that he would hit them on the back of the head when they would err in his studio. “It was somewhat playful, but there was a hint of sincerity behind it, “ said Jamin. Whereas Jake didn’t mince words: “He’s fucking crazy”. He said this after explaining that Auerbach got so upset that one day he threw an amp thru the studio window, making the band take a three day break they were still on the clock for.

After assuming the relationship between Auerbach and the band is now on the skids, they tell me what a good guy he is and how they all got together to get beers not to long ago with straight-faced realism. To my bafflement, they both shrug it off and nod to one another, Jamin handling a clear plastic walking cane and Jake slouched in an adjacent chair in the gaudy Warner Bros. artist relations lounge room. They are easily the some of the most adaptable and earnest people you have ever met.

To that end, they are realistic about the future not only of their career, but also for their label, which still exists without a proper label distribution deal. It's run with a DIY ethic, through their connections with record store buyers across the globe, a fervent mail order fan base with a similar international market and a staff of friends in Nashville. Jake – who runs all the business of the label, Jamin pitching in to help where he can – explains that the label is currently “breaking even”.

Jake is in complete control of the label, not relying on his father Robert Orrall, an accomplished musician and songwriter in his own right, to provide any directional insight. Jake goes on, “We don’t really pay anyone yet except for the bands. Our dad really has no say in the business matters of the label as he comes from the old school, and really doesn’t understand the new market for independent labels.”

As for success of the label, his goals aren’t lofty – “I would like to not have a stroke”

Which brings us to what the Brotherhood expects in the future. With countless comparisons to Weezer (“If as many people that liked Weezer liked us, we would be in pretty good shape.”), live albums recorded with Jack White, and major label expectations; they remain unfettered by any of this. As Jake says, “Maybe we get to make another record, maybe we get dropped, and maybe we make another record after that.”

That doesn’t really sound like the most effective retirement plan, but they aren’t necessarily resting on their laurels. They will be continuing at the same speed of recording, touring, and grilling. Jamin echoes his brother's sentiment and seems unconcerned, “Yeah, who knows, really? But it’s fine. That’s the mystery. But we’re ok with that. “

So as a band that is poised for break-out success moves forward, don’t expect to see them spending all their time backstage, fending off adoring fans. You’re more likely to see Jake working a beer-can chicken on the grill while Jamin sips on a beer, playing Big Buck Hunter waiting for dinner to finish up, singing along as Thin Lizzy’s “Southbound” plays on the jukebox before soundcheck.

Below is the video for the band’s single “Sixpack”.