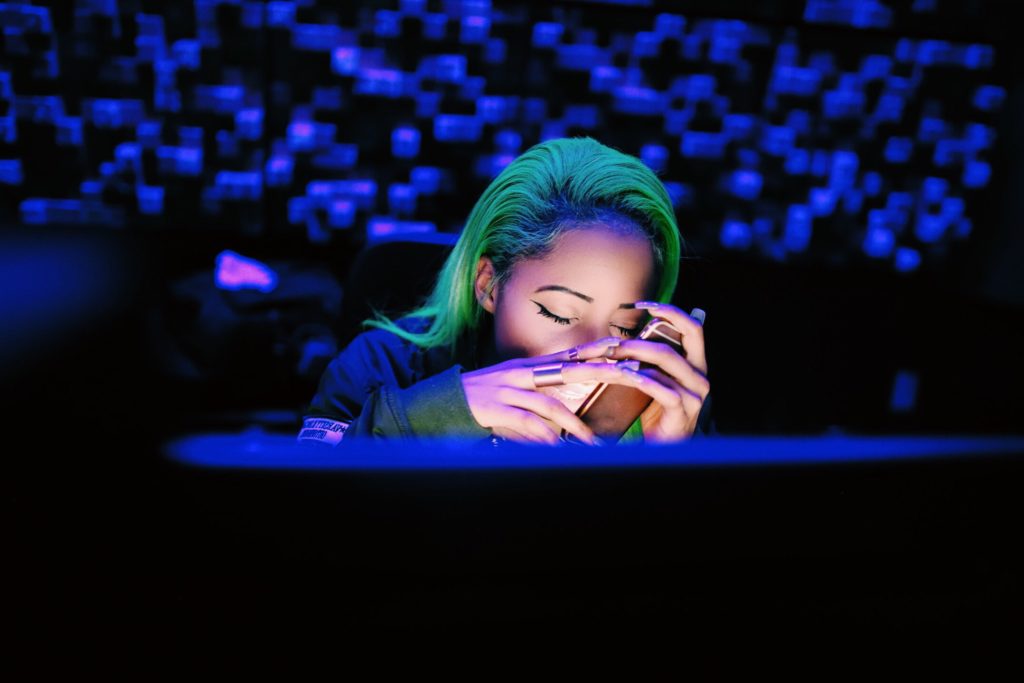 Liana Bank$ is into simplicity. Her writing and recording process is bare bones because she’s a flippin’ natural when it comes to creative. She has a way with words in her music that doesn’t need to be retouched. When asked how she would introduce herself to her audience, she simply said, “Unless they belong to a song, I’m not a big fan of words. I’m into actions. At the end of the day I want the focus to be on the music. So, I like to let my art speak for me. It’s when I’m my truest self.”

And her art sure is speaking for her! Having worked behind the scenes as a dancer for Chris Brown and as a songwriter in her own right (submitting songs to big time musicians like Nicki Minaj and Rihanna), she comes by her work naturally. Now that she’s working on her own music, she’s getting noticed. Her first music video for “LVLUP”–a single that got ridiculous amounts of attention on Spotify–is featured below. She’s also sharing her most recent single “Off” with us.

We got a chance to throw some questions her way, and this is what she’s got to (simply) say.

When did you decide you wanted to pursue music as a career?

This might sound cliché, but honestly… I didn’t decide I wanted to pursue music. It kinda decided for me. I had a brief moment as a kid where I told myself I’d study law and become one of the biggest lawyers in the business. As soon as I got home I started writing a song, lol, music was the only thing that drove me. My law dreams never stood a chance.

How do you think being raised in Queens has helped shape who you are and how you approach your sound?

I think being raised in Queens made me gritty! Well-mannered but still ready for whatever, whenever. I’ve moved so many times growing up, so I’ve lived just about everywhere in Queens and stayed out in Brooklyn as a small child. This taught me how to adapt, QUICKLY! That aspect translates into my music heavily. I’m good at navigating my way through a track and adding my own flare to take it to that next level.

How would you describe your sound, specifically?

James Brown & Sade’s secret love child. I’m either all the way up, twerking in a handstand or rocking back and forth in a dreamy vibe.

We love your raspy vocals. What do you think makes your sound and your persona unique and special in this industry?

Thank you! Growing up I actually hated the raspiness of my voice. It made me stand out and I hated the extra attention. Now I love it! I think my tone and approach are what make me unique.

Your debut album climbed to the Top 10 on Spotify’s Viral Charts. What was that like for you?

Yes! “LVLUP” hit the charts! It was completely unexpected as it was my first solo release as a recording artist. Definitely an exciting experience and hopefully the first of many!

Your new single “Off” is very sultry. We read that the track was inspired by consumerism. What was the writing and production process like?

“Off” didn’t have much of a process. It had been a while since I’d been in the studio with my producers YOBO. So, there was a lot of pressure being that we were focusing solely on something for my project. We made it from scratch, Broadway started the track and the words came to me instantly. Once the track was finished, I put my vocals down. It was just like old times but 10x’s better, they just get me.

You’ve had a chance to dance with Chris Brown and work with legendary producers like Scott Storch and JR Rotem. What has all of that been like? Do you have any fun anecdotes or memories?

It’s been wild! Hmmm I have a bunch, but nothing I can repeat lol! Let’s just say my music is all factual.

Who is your favorite superhero and why?

Definitely Batman! He has a dark quality about him that almost makes him seem like a villain. He’s a hero, but a loner and protects his city at any cost necessary. NYC reminds me so much of Gotham.

What advice do you have for women growing up in today’s world?

Learn yourself, you’ll never know what you want until you know who you are and what makes you tick. Stand firm in your decisions. Don’t be afraid to speak up, meekness and womanhood are not synonymous.

What’s up next for Liana Banks?

More shows, more releases, and I’ll also be shooting another visual very soon! This shit is gonna be epic. I’m so excited about this project!