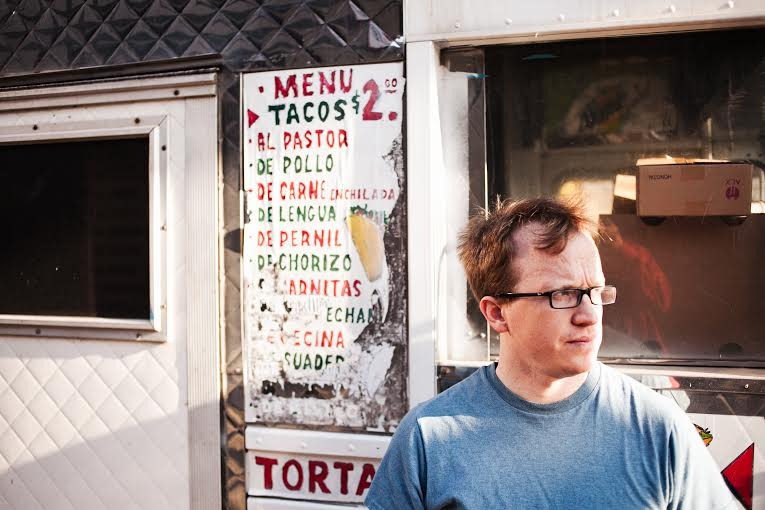 While I think of myself as a comedian, I tend to do some things that aren’t necessarily regarded as comedy. Now don’t get me wrong, I do stand up as often as possible. And I trained for years as an improviser at the UCB, widely regarded as one of the most competitive houses of comedy in the country. I’ve picked up acting gigs and writing gigs and all the things comedians are supposed to do. I do it all, as often as possible. It’s a good life and I love it.

But like I said, I like to go in different directions as well. I once hitchhiked across the country making videos with people I met along the way. I once used Twitter to convince Sean “Puff Daddy” Combs to come perform with me in the UCB’s basement space in New York. I once staged a show on a moving bus that ended with the entire audience standing in my unsuspecting parents’ living room asking them questions about what it was like to raise me. I run a weird public access show that has had episodes entitled things like “Genuine Sadness” and “The Belly Burrito”.

I’m not here to list credits, though, I promise. I’m here to talk about one of the most major influences on my work. And not any of the obvious ones. I think anyone who knows me is unsurprised to learn that I was obsessed with Andy Kaufman growing up. David Letterman is like a god to me. There’s many examples of very well known comedians who bent boundaries and played with forms that on my best days I’d like to think I land in the lineage of. Those are all very real influences on my mentality and approach to my more oddball projects.

And then there’s Velocity Gnome.

I don’t remember when I first came across the Velocity Gnome story, as it happened during one of my many nights of being unable to sleep and instead clicking on links online. I went down some rabbit hole or another and wound up reading one of the most amazing stories I’d ever experienced.

While reading it, I could feel it inspiring me. That rush of adrenaline set in, the type of thing that as an artist you only feel once in a blue moon. On that late night, I found something that made me realize more things were possible than I had previously understood.

I don’t want to say exactly what Velocity Gnome is, because if you haven’t experienced it I want you to enjoy it for yourself. (The best place to read about it is the series of first person accounts found at www.thefutureshock.com). I’ll give you some of the basics so we can all be on the same page.

1. The accounts are written by a young man named Kolin, who actually experienced the events at hand. He was the subject of the events and had no part in planning them.

2. Everything started when a complete stranger knocked on Kolin’s door, claimed he was from the future, and handed him a package.

3. For the next few years, Kolin wound up interacting with these people intermittently. Some of these dealings happened online, but most of them involved Kolin traveling to a number of different states while meeting many people who were in on the conspiracy, which he was sometimes aware of and sometimes not.

4. After a few years of these strange interactions, they stuck the landing

Now, it’s not like Velocity Gnome is a total unknown. Word of it spread around on the internet even while it was happening, and in the years since it pops up at different sites from time to time and is analyzed as a prank or a weird thing that happened.

But my guess is that this project was actually one of the first things that utilized the internet in a way that should and hopefully will infect mainstream entertainment moving forward. In many ways it is a clunky Stone Age version of things that are starting to happen only in the past year or so.

I think Velocity Gnome was a pure and distilled early 2000’s look at where things are going. It was way ahead of its time and if more people knew about it I bet it would be studied in college classrooms and analyzed by young enterprising network executives.

At the core of this belief is the idea that entertainment at its best should feel personal. The consumer should feel like they are having an interaction with the work they’re experiencing. For comedies on TV that means making people laugh. When a lady on her couch laughs at Parks and Recreation, my guess is that because at least some small part of her identifies with Leslie Knope. That experience has been personalized. When a horror movie causes a theater full of people to scream, each of those people felt the tension that caused it. It was an internal experience, and the expression of their terror at the same time turned that personal experience into a communal experience.

But it’s 2014, and technology has changed severely, and we’re all figuring it out, and I know this is drastic to say but it is going to change the way people feel things. And I think what Velocity Gnome did was use the internet in a way that successfully (I’d imagine beyond the dreams of its creators) showed that the best way to make entertainment feel personal is to let entertainment be personal. Kolin didn’t just feel like he was the hero in the story of Velocity Gnome. He was that story in a very real way. He was the lead character in a piece of entertainment that existed online, in art galleries, in song, and in his own home. The experience was written for him, then written around him, and without him even realizing it, at times written by him.

This all went down starting in 2003. But to me, it feels like something that mainstream entertainment won’t catch up to fully for another fifteen years. But the writing’s on the wall, and Velocity Gnome was the hieroglyphics version of that writing—people these days don’t consume, they participate. Why does Twitter exist if not to directly interact with celebrities? It humanizes them and suggests the potential that any kid in the world can have a personal relationship with his favorite star, because they’re both people who get bored and send out 140 character messages on their cell phones and can do so to one another.

The potential for interaction is intense for a generation of young people who watch their TV shows on iPads, that they can then immediately use to go to a message board to read the viewpoints of other fans regarding the very show they just watched, before clicking over to a professional reviewer’s take of it which they can then leave a comment on expressing their own viewpoint before jumping over to Tumblr to search the hashtag relating to that show to see what sorts of gifs and memes erupted from that episode.

In the future, my guess is that every television show that thrives will view the show it actually puts on the air as the tip of a large online iceberg whose priority is to consume and involve the viewers of their product. Look at the way the internet rallied around shows like Community and Arrested Development and think about what would happen if networks built the rallying points and battle grounds for those fanbases as part of creating a show rather than letting it be a de-centralized online geurilla movement. They could have armies of fans feeling like part of the show. What was Team Coco if not an incredibly passionate movement online comprised of people who felt like they really knew Conan? These examples to me, as someone who works in TV, are the most exciting thing in the world. To me, those incidents are akin to staring at a chemistry set and realizing “All these ingredients are here and sometimes these things mix together on their own, and reactions happen spontaneously. We’ve seen them. I want to figure out the actual science of it.”

Look at what Jimmy Fallon and @Midnight are doing on their respective networks. Those shows have built massively dedicated fanbases through humanizing online moments that happen on their air. Both of those shows feature segments where viewers can get their tweets shown on the air while the show happens. It’s not rocket science to think that maybe part of the massive ratings of these shows comes from the fact that while they are very enjoyable shows, they are also shows where people can watch because their dumb Twitter handle might pop up on the screen.

The world of professional wrestling, in my opinion, is at its high points a consistent cultural indicator of where the mood of America is heading—and they just executed a storyline where Daniel Bryan won the world championship by intentionally fomenting a movement of fans online that could also show up at arenas and disrupt the show by chanting his catch phrase while people were trying to talk. They were invited to participate both in the arena and out. And why did they rally around Daniel Bryan? Because his bosses kept saying he was too small and not pretty enough to be a champ. He was too much like the people who liked him. And those people responded by rallying around him, actually disrupting events, and forcing the issue in a way that made them feel like they all won.

What’s beyond that? What show will build the next platform, internally, without having to convert existing online social tools to achieve the same effect that Fallon and @Midnight are harnessing? Who’s going to create the first show that’s a truly immersive experience, a show that the viewers can control, a show that makes every single person watching it feel like they are the actual hero of the journey? TV and video games are so close to being the same thing—you can just feel it if you stop and look around a little bit. But the main players in these TV/video game hybrids aren’t going to be the people the casting agents cast—they’re going to be the people that come out of the woodwork and consume. I’ve tried to experiment with these ideas with my public access show, because I’m inspired and because it’s exciting and fun and feels creative to do so. But there’s only so much one can do on public access while losing money. Someday a network will give a real budget to a progressive maniac and he will smash the internet open and pour its juice all over TV and nothing will ever be the same again.

Or at least, Velocity Gnome made me think so.

Chris Gethard's My Comedy Album! is out now on Don Giovanni.

PrevPreviousLiterally the Least Sus Interview Ever with Sam Ray
NextFeeding the Cerebral: An interview with Jeremiah JaeNext