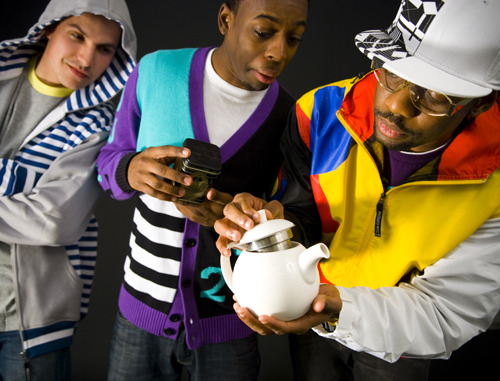 The 1970 Dustin Hoffman film Little Big Man was a telling marker of the decline of the Western, a genre that dominated American cinema since its inception. The film effectively pays homage to the genre while simultaneously deconstructing and parodying its conventions every step of the way. Old Money, a New York based rap group, just might be hip hop's Little Big Man.

Last week, their deconstruction began before the band went on stage. “Eff School!! I rap!!” announced the flyer. It heralded the start of the band’s cheap shots at the pop-culture stereotypes of hip hop, which are as equally ridiculous as the parody itself. Still, Cambridge and Scheme are by no means crusaders seeking truth and meaning in hip hop culture. They're using its conventions, not only to make a point about the cultural expectations of a largely misunderstood genre of music, but also as a jump-off point to help define themselves by what they are not. Old Money is not your older brother’s hip hop. Building on the core idea of beats and raps, they’ve drawn their influences from a range of music that includes dance, rock and electro in their efforts to make something new.

When the actual show started the rappers made an announcement concerning what Old Money was not going to rap about. It was to be known that they were not going to rap about guns and drugs; however, with Old Money, an announcement is just that. As the night progressed, lyrics hovered on the general topics of girls and style, but they saw no reason to avoid using gunshots as beats. Each song was completely indulgent, using hooks like “I’d rather break up with my girl / than break up with my barber,” which could barely be delivered with a straight-face. Then again, the performers were having as much fun as the crowd, so there was no need for anyone to keep a straight face.

While the music bordered on hip hop parody, Old Money’s joke was made starkly apparent with vaudville-like interludes between each song. In these mini-comedy acts, the performers announced their appreciation for aspects of traditional hip hop, and then tried to perform their own homages, wrought with sarcasm yet well-executed nonetheless. One example was their cover a Old Dirty Bastard’s “Shimmy Shimmy Ya”, which they performed in a way the that highlighted the utter absurdity of the lyrics to the point where audience and rappers alike were laughing so hard, the performers called the DJ to stop the beat. Afterwards, they jumped into a dance-off before launching into one of their own dance-step songs.

It’s often interesting to see how a group that is trying to evolve a music genre matures their sound over time, however, it’s doubtful that there will be any maturation process for Old Money. Keeping things fresh and off the cuff are as much a part of the band as the hot tea, and everyone knows that hot tea is an integral part of hip hop, right?

Andrew Rozas: Did you guys intentionally want to deconstruct/parody certain notions of hip hop or did that kind of just happen?

Scheme: You mean the rhymes about how much crack we push part? Who said we weren't serious?

Cambridge: Son. I sell mad crack son. All day son. All In the sun son. No sunscreen son. Just be out there mad ashy black pumpin that white. That's hows real we be up in these streets. Straight duckin the jakes, gunshots, and them UV rays up in this b!tch. Holla @ me. Won.

AR: How did you get the idea to have skits like the Wu-Tang song, and the dance off in between the songs during your show?

AR: What brought you to make the shift away from traditional hip hop into your current sound?

Cambridge: I would say Sallie Mae had a large part to play in all this. You'd be surprised how creative you get when you can either sell a kidney or make some songs to pay back your loans. I guess from extreme poverty comes great works of art.

AR: Do you think pop culture has figured out how to define hip hop?

Scheme: Ha! When it's become the norm for commercials to have a hippity hoppity boogity beat in the background, middle aged white women in the fore, and Fabio in the back talkin' that “can't believe it's not butter…spraaaay” stuff in the background – hip hop these days IS pop culture. For better or worse.

AR: What's with the teacup in that picture you sent me?

Cambridge: It is because we are thoroughly enamored with our own ghetto snobbery. Oh and please dont forget to add 'yanahmean' and 'b!tch' to the end of all our sentences… We wouldn't want anyone to think we were getting soft up in this b!tch (pause). Yanahmean??!!??!?!

Old Money are performing Saturday night in Brooklyn at Galapagos.