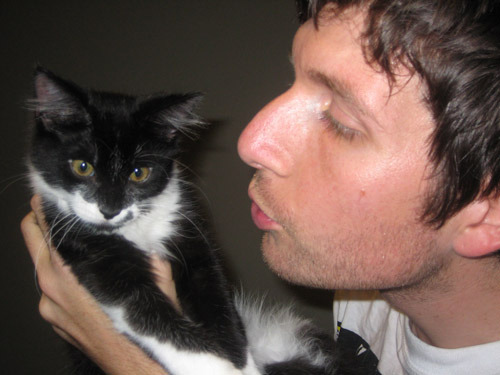 PPM came before No Age or Wives. I put out a 7″ by a band called the Intima in 2001 (a long forgotten gem!) and then after I lost some money on that, I started Wives and we just took it from there.

Nobody wanted to put out our stuff, so we did it ourselves. No Age's first thing ever was a demo version of “Deadplane” on a cassette that came with a Darkstar skateboard, and we did a split tape with Abe Vigoda on Death Bomb Arc. There is as much of a point to putting something on cassette as vinyl and CD. I love cassettes; it's what I grew up with. They sound warm.

I have always loved record labels: SST, Dischord, Rough Trade, etc., and I wanted to try and be a small pimple on the ass of the DIY music world. I think Touch and Go and SST are big influences. I dont want to be exactly the same, but I think I look to them for spirit. The wheel has been made, but it can be shaped a little better.

I just want to release records by my friends, people who inspire me and people who share my aesthetic: people who are honest and work hard, DIY, basically. It's annoying to hear it as a description of a scene or something, but it is what it is. When I say “I am a Punk Rocker,” I mean it in a way where I am talking about DIY and about expression and intensity. Not a mohawk or anything, but in the Minutemen or Black Flag way. Everything I have put out I would put into this category (Okay, everything but maybe one).

Some people aren't great friends, but I think of them all as friends. I am less into the conquest, and really less interested in making money to a degree, I just want to make rad stuff with rad people. I am not interested in signing bands that I think will be popular. I like to work with friends and a lot of my friends are in great bands and when we work together we can sell records, but I would never sign a band just to sell stuff, it's just not my thing.

And as long as I feel the need to release records by my friends, PPM will be around, but I'll also know when it's time to split. I think it can be a vital part of our community for a while. [On that note,] the Smell is not replaceable. It's a very unique space and is very important. If it were to leave, there would be more stuff to take on it's legacy, [but for now] it is just too important and what it represents is too great. Vacation and Origami are two new stores for records and Ooga Booga and Family sell books and art stuff, and all are very central to our world. Also, there are venues like Echo Curio, Pherspace, etc. that are around as well.

I have an awesome label manager named Josh Taylor who used to be in the great band Friends Forever. PPM wouldn't be what it is without him. Look forward to Silk Flowers, Gun Outfit, Infinite Body, Abe Vigoda, White Shit, Eric Copeland, No Age, Total Abuse in the next year or so.