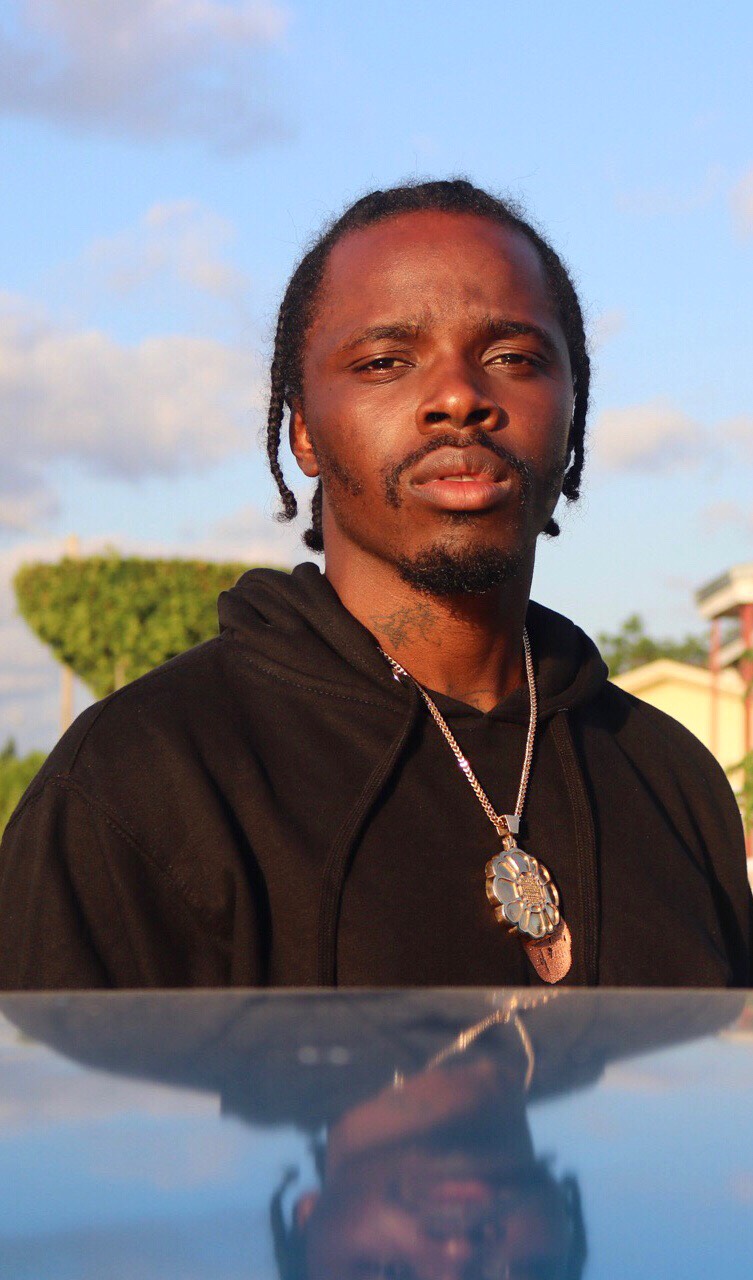 Twelve’Len is on a journey, and his destination is a record of timeless anthems.

But his expectations for his upcoming project, currently titled SHE in honor of his Florida roots, are unreachable to many.

Not Twelve, though. Listeners will remember the record forever, he says, and he’s certain they’ll remember him forever, too. He insists he’s not feeding his audience summer anthems, but rather multi-seasonal R&B classics.

One of those classics (and his latest release) is titled “Thank the Gang,” a track that’s aesthetically ’80s but sonically something that has never been done before, he says. The Florida singer’s latest is visually an Al Green-esque smoke-filled throwback, but sounds so far out of the usual realm of hip-hop that it perfectly encapsulates Twelve as an artist.

He’s different, and he’s pushing the boundaries of what it means to be a hip-hop artist.

Twelve explained the process of creating his new record, the inspiration behind “Thank the Gang,” and shared some advice for young kids looking to push boundaries in his most in-depth discussion since dropping that timeless anthem.

IMPOSE: “Thank the Gang” dropped last month and hasn’t left my Twitter timeline since. Something I love about this track, and you said it yourself on Twitter, is that you didn’t need any help from Spotify-curated playlists to get it out there. Is this an accomplishment to you?

TWELVE’LEN: I do look at it as somewhat of an accomplishment. Only because it’s exercising my ability to be able to be a young or fresh artist coming into the music game. I don’t really like using that term, but coming into music and not really using the playlists used by your peers around you. I mean the only reason why any artist would have any type of buzz or why they are where they are is because of their peers, their family and friends.That’s where you sell your music or your fashion or whatever it is that you’re selling. That’s who you sell it to first. Your friends. Get them on board. That’s how you get your shit out there.

IMPOSE: The track really reinforces that idea of sticking with your crew through your journey of coming up. What inspired you to frame a song around that? Was it the idea that your first fanbase is really just that, your friends?

TWELVE’LEN: Yeah. I look at my fan base as even deeper than my friends. I look at them as my family. Also, because I’ve been in the works of creating my first actual album. And going into creating, when I create, I don’t generally do what the typical artist of today’s time does, which is just going in and freestyling some shit. I go into it very premeditated. And in the process of creating this project, I wrote down a list of things I actually wanted to touch bases on that I connected with. Not what I think people go through, as that’s completely against everything I believe. I feel like you should only speak on things you have seen. I feel like you should speak on things that you genuinely only had happen… It’s not like there isn’t artists that do speak on certain themes and everybody knows that they didn’t go through it. When creating “Thank the Gang,” it was one of those records in which I set out to accomplish, which is creating a record that is thanking everyone around me and not only thanking everyone around me. It was written from a deeper point than that because when creating that record, I felt alone. And writing that record, I guess it was me reminding myself that you do have people in your corner. And sometimes you get so caught up in the fight. You get so caught up in the fight, what it is that you’re chasing, you gotta feel like you belong because you’re the only one that’s fighting. But you have to stop, you have to look back in your corner. When you look back in your corner, they’re not in the ring taking those punches. They not in that fight. Sometimes you have to be grounded and humble yourself and that’s what “Thank the Gang” is. And it’s also to be able to say, “Man, you did this shit. Everything that you got, you deserve, you worked for it…” But talking about all that shit that you got and waving it, this is more so just saying “I worked hard for it.”

IMPOSE: You teased the album title Precious a while ago. Have you reimagined an album title since?

TWELVE’LEN: Yeah. It continuously evolves with what I go through. But it’s all of the things I have been running around with, it all revolves back to the substance of what it is about. Even when the title changes, it’s still comes back to what the root of it is. So right now, the album name for short is gonna be SHE. It stands for Sugar Hill Express. Sugar Hill Express is Uncle Al. Uncle Al had a radio station called Sugar Hill Express. It was an underground radio station, way back when I was a kid. And a lot of people know of Uncle Luke. [It’s] the Miami base but more so R&B. But the bottom baseline and everything is me pulling away from when I was growing up, eight, nine, ten years old outside dancing at the block parties with all my family and friends. And those records we used to be inspired and rocking out to, would totally be the Uncle Al’s. So it’s pretty much just bringing it back home. In any type of way, like creating interludes from the station. At the beginning of “Thank the Gang,” it highlights one of those moments where Uncle Al talks on the radio station and it goes into “Thank the Gang.”

IMPOSE: The keys on the track make it clear that you’ve drawn some musical inspiration from decades ago. Is this your new route, ’90s R&B crooning?

TWELVE’LEN: Oh, it’s the anthem for summer, fall, winter, spring. I mean, it’s a timeless record. And that’s what I always aim to shoot for, to create music that I feel is timeless. Because even if you haven’t experienced or endured themes, at some point in your life you will.

IMPOSE: I saw Denzel Curry, a good friend and collaborator of yours, tweeted out the lyrics to “TTG” the other day. How does it feel to see guys like him supporting your work?

IMPOSE: You’ve talked a bit about your past and how you grew up singing with your grandma. You started your career as a rapper and you’ve transitioned from it. Do you want to be referred to as a rapper? Does it bother you when you are?

TWELVE’LEN: It doesn’t bother me. At the end of the day, I know it’s just a misperception of what they see of me. Externally, they will look at me and just assume, draw assumptions without actually digging into me. And they just go with the hype. When people see the hype they just jump on it without actually trying to get to know it. And then they get to know it and it’s like, ‘Damn, OK. He ain’t a rapper.’ It don’t bother me because the culture of hip-hop is more so by the genre of rap. So it’s cool. I know when they refer to me as an artist, it’s a term that they use very loosely and don’t really think about it. Hip-hop is the culture. So it doesn’t really bother me too much.

IMPOSE: Did you ever worry how your peers would react when you transitioned from rapping to singing? Did you ever feel like there was stigma surrounding your musical choices?

TWELVE’LEN: They ain’t really react in any kind of way. More so hype because it was somebody apart of the crew doing something that can help evolve them as well. Of course Denzel, I work really close with him. I get in the studio and shit and write with him. We exchange thoughts on things and we just help each other grow… A lot of them, my creative homies, didn’t look at it weirdly. More so the consumers around me probably did. That’s not what they was accustomed to because that’s not what was being pushed out.

IMPOSE: You just dropped a visual for “Let’s Stay.” And this is a track you’ve had out for the last year. What inspired you to drop the video now?

TWELVE’LEN: So, with the video of “Let’s Stay,” I released “Let’s Stay” in August and didn’t push that shit at all. Joe Budden, his podcast, they got behind it and pushed it a bit. And I released it for a Red Bull documentary. I pretty much just shot that record out and it walked on its own for a little bit. No support, nothing too crazy. And just recently I was like, “Hey, I don’t want to put out anymore music, so let me just put a video out to ‘Let’s Stay.’’’ I was just hanging with the homies one day and decided to throw a little gathering. Just for “Thank the Gang” coming out and I ended up filming a lot of stuff on my little camcorder handheld. And I took a lot of that footage and I just put it together and edited it out myself. And I just attached closing out with a new record, which will be my next release.

IMPOSE: And what’s that called?

IMPOSE: What do you hope listeners take away from it?

TWELVE’LEN: With the next record, it’s gonna be crazy. If people love “Thank the Gang,” they’re gonna trip the fuck out. The entire album is very mature. It’s very mature, it’s very seasoned. And it gives goosebumps. And it was created that way. I just feel mature. It’s something different, it’s something fresh. And it’s something that, even as a consumer, you feel proud of because you have something new you can put somebody on to. We all want to put somebody on something. You feel good showing somebody some music, that chick that you kicking it with. It feels good. This is one of those records. If I show somebody this record, it’s gonna stick with them forever. And they’re gonna remember me forever. That’s what music and photographs do for people. It captures a time period and it traps us in it. It sticks with us forever.

IMPOSE: Do you have any advice for young kids coming from somewhere like Carol City with this idea of pushing boundaries, almost like you are?

TWELVE’LEN: The only advice I can give is don’t be afraid. Stepping out of your comfort zone works. And stepping out of your comfort zone in every manner: physically, spiritually, song writing, and just your friends. Don’t be afraid of stepping out and making new friends. That’s what it’s always about. It’s about making new friends. It’s about expanding the network expanding around you. Coming from areas where we come from, conditions us to be very aggressive. And it conditions us to be very passionate. So don’t be afraid to use that passion and channel that aggression and redirecting that aggression and passion toward the thing that you really want to accomplish, versus the impulse of what our society triggers us what to become, what to do.