The Guiltless Pleasure of Dent May 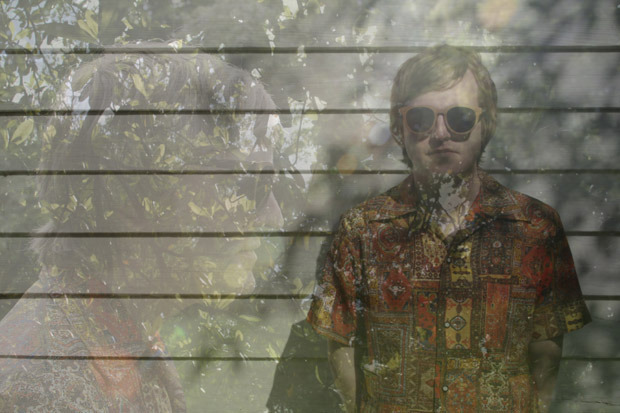 Oxford, Mississippi might not appear to be the breeding ground for one of this summer’s indie-pop zeitgeist jams, but Dent May and his new album Do Things (Paw Tracks, 06/12) seem to be floating the river at a different pace than the rest of us. Signed to Animal Collective’s Paw Tracks label while the group was in Oxford recording Merriweather Post Pavilion, Dent May has become a self-sufficient creative outlet. May played every part on Do Things and recorded it at his home, the Cats Purring Dude Ranch. So who can really fault him for moving at his own stride? At a base level, the songs on Do Things may harness floating rays of folly and playful irresponsibility, but at their core, these are expressive therapy sessions for May.

This NYU film school drop out may have created the picturesque environment in which to easily crank out crooning psych-pop jams. However, composing himself to cull his ideas into coherent musical thoughts was more difficult than May had expected. After supporting his last record, Dent May and His Magnificent Ukulele, May needed to prove to himself that he wasn’t a one-trick gimmick pony. Enter his answer, Do Things. The record provides the listener with all of May’s internal struggles and dark turns, in stark parallel to the floating ambiance of the music accompanying them. In that, May has given a relatable road map for the desperation which can become exceptionally familiar to those in the summer months searching for an end to hazy doldrums, and that’s what makes these tracks so poignant.

Take the track ‘Fun’, in which May ponders: “Don’t know what’s in store for me/but I think it’s going to be fun”; that sentiment alone is easily the anthem of every summer season. Or look at the opening track ‘Rent Money’ – “When you were young what did you fantasize your life would bring/Don’t wait for it to come, you’ve got to stand up and do your thing”. These songs are as much party favors as they are focused on abandoning the misguided optimism of having a Hollywood take on an “epic summer”. In that, Do Things accents those lofty expectations in bubbly jams, but revels in the unseemly reality of never knowing what will happen. Invariably, there will always be moments of boredom and aloneness, and one must rely on themselves to find the cure. With that, the listener is left realizing that creating ones own template; and not following a script, is ultimately how one can get out there and just, you know, “do things”.

I recently asked May about his process in writing Do Things, his move back to Oxford to focus on the Cats Purring Dude Ranch, and his favorite Creed songs. May plays Friday in NYC at 285 Kent. The rest of his tour dates and video for “Best Friend” are after the interview.

In researching on you, you were very clear that in order to record Do Things, you would need the proper inspiration. What brought you to your inspirational light?

After all the touring for my ukulele album ended, I really didn't feel like I knew how to make music anymore. I very intensely wanted to prove to people that I can do anything and that I'm not just the ukulele guy, but I was too depressed to lift a finger. That's what the lyrics to most of the songs, and especially the title song, on the album are about. I had no purpose, and it took some real tragedy in my own life to snap me out of it. I had an epiphany where it was like, wait, all this stuff going through my head is what I need to talk about. The solution was so easy that it was actually quite difficult.

The song “Parents” is a stand out for me on the album. How do your parents feel about leaving film school and jumping head-first into Cats Purring and your musical career?

My parents have been 100% supportive in every aspect of my life and career, so I made it clear to them that the song's not meant as a dig at them specifically. I constantly think about getting older and the fact that we're all going to die. So many people seem to lose that lust for life as they get older. I always want to be in a state of discovering more about the world and myself. I've known a lot of people who seemingly lost all desire to live an interesting life as soon as they got a career and a family. We're not here for long, so have a good time, dammit! My parents always told me I could literally do whatever I wanted, and I believed them. They're super open minded and encouraged me to be ambitious.

Southern living breeds southern songwriting. While the melodies aren't what one typically personifies with Southern music, the lazy-about life style and slow living that is relatable in many 'Country' songwriters is apparent on Do Things. Do you have any affinity for the likes of Guy Clark, Townes Van Zandt, Kris Kristofferson and that whole generation of songwriters?

I'm a huge fan of old country music, and I even had a country band called Cowboy Maloney's Electric City. I was working on a sort of psychedelic country rock opera and never finished it. I love living in the south, but I hate the industry of southern culture and all the corny down home bullshit. On the other hand, I absolutely adore southern women. People really are insanely nice down here and the life of leisure definitely influences the feel good nature of the music.

Since you were studying for film, do you have any film-scores or film influences that make their way into your art?

I like cult filmmakers like John Waters, Russ Meyer, Terry Gilliam, Jodorowsky, David Lynch, and so forth. I like anyone who has their own vision and pursues it relentlessly regardless of the entertainment industry at large. I do want to make some sort of rock opera sooner than later. I have an idea with Alex who made the “Best Friend” video that's kind of like “Designing Women” on acid meets “Brazil.” Alex is joining our band as the drummer, so hopefully we'll have a lot of sweet video content this year. I want to act in movies as well.

I went to school in a small college town, Lubbock, TX, and I know that it gets easier and easier to become comfortable with the same bars, restaurants and scene. How do you keep yourself from overexposing yourself to a town with a population of about 20,000 people?

It's a blessing and a curse living here. There are only a couple of bars I go to regularly, but I have no qualms about stepping out on the town. Sure, people ask about my music a lot, but it's in the same way I might ask about their job as a lawyer or bartender. People genuinely care about each other down here. I put together a lot of shows for other touring bands. I live at the Cats Purring Dude Ranch, where we've hosted shows from Real Estate, Grimes, UMO, Youth Lagoon, Jeff The Brotherhood, Dirty Beaches, and many more. The main reason we do Cats Purring is to keep ourselves inspired, and hopefully some of it will rub off on the younger kids coming through. Still, I rarely play shows in my hometown, just because I don't want to be one of those local bands playing the same bars every weekend.

You have made it very vocal about your disdain for your time in New York studying at NYU. Why do you feel that New York ended up being such a dark experience for you?

I probably should be nicer about NYU. I met a lot of cool friends there, and some of my professors were actually very interesting. I guess I'm not really into the idea of art school in general. It's too much thinking and not enough doing. Literally, the first day of school, they told us at an assembly to go ahead and pick a job on a film set we want to focus on, because it's highly unlikely we'll ever get to make our own movies. That's just the worst shit to tell kids ever. I was like, if I want to make movies, I have a much better shot doing it without y'all's help. If you want to be an artist, don't go to college.

As an active twitter user, there are a few things I want to ask about some of my perusal of your Twitter feed:

a) How is the e-cigarette going for you? I'm in a constant flux of quitting and not quitting myself. How long have you smoked?

I don't smoke cigarettes! I was tweeting about eCigs, because some of my friends had them and I thought they were hilarious. I do smoke weed sometimes, and I highly advocate vaporizing, especially as a singer.

b) The rumors of Paul McLeod's death were greatly exaggerated. Have you made your way to Graceland Too and met Paul?

Oh yeah, going to Graceland Too was the first thing I did when I moved to Oxford, and I've been there many times since. He's a genius and a visionary. I've never even been to the real Graceland.

With the Rdio/Spotify's taking over party playlists, a lot has been said amongst my peers about finding 'guilty pleasure' music on these services, the kind of music you used to listen to when you were younger. What are your thoughts on music being classified as 'guilty pleasure' jams? (Side question: What was your favorite Creed song to cover?)

I don't believe in guilty pleasures. I want to embrace shit that's not cool and use it in my music as much as possible. So much of the indie rock thing is about being cool and having the right influences. Fuck that. I like Steely Dan and the Eagles and Can and Velvet Underground too. I came up playing 311 and Creed covers in junior high, and I'm proud of it. I wasn't the singer in the band, but I rapped on 311 “Down” and sang backup vocals on the Creed song “One,” which gave me the confidence to write my own songs. And of course all the '90s R&B and rap was a huge influence on me, and that's popping up everywhere in music these days. Next, I want to collaborate with will.i.am.

What are your long-term aspiration as a musician?

My only goal is to make as much good stuff as possible and keep doing it until I'm very old. I have no lofty career goals, and the quality of my output is all that matters. It's cool if I don't get any acclaim or money in my lifetime. I want a kid who's having a hard time 100 years into the future to pick up my album and wear it out. Anything else is meaningless.