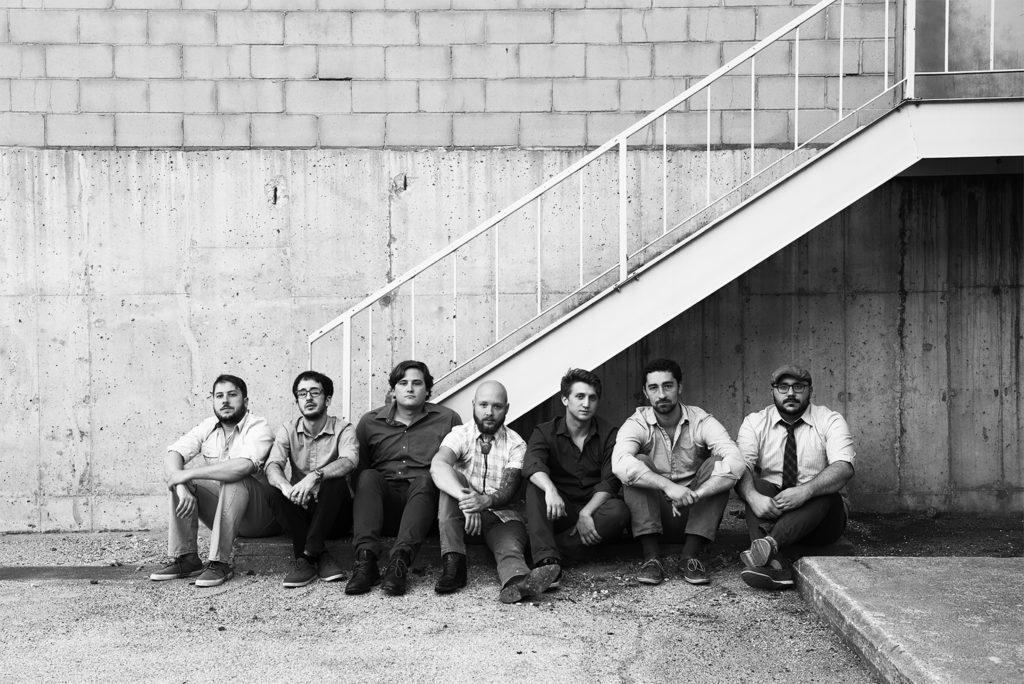 We were lucky enough to catch up with Andy Poppen and Dustin Smith for a little bit of insight into the new album. And to get an insight into their daily mantra, which is one helluva line.

Tell me about yourselves. (What makes you tick? Where are you from? Do you like green eggs and ham? What’s your musical background like?)

Andy & Dustin: What makes us tick? Goldfish of course. It’s our go to in any creative lull. Flavor blasted to be particular. While we all grew up in different neighborhoods, a lot of us have known each other since grade school. Des Moines has a very tight-knit music community, so as kids we would find ourselves taking jazz lessons from the same teacher or running into each other at jam sessions all the time. When Sam and Dan came up from St. Louis for college, they pretty quickly fell into the same circles. This group is kind of an evolution of a band Dustin started after coming back from New York around 2011 called the Sunday Silos. The Silos were a larger group, and had more of a folk/singer-songwriter feel. As the group developed, we really starting craving a more soulful, rock influenced sound. After touring the East Coast in 2012 with a slimmed-down roster and recording an EP in Nashville that following winter, we realized the group had morphed into something a little different. So the decision was made to release the EP (Nova) under a new band name, and the Maytags were born!

Where did the name “the Maytags” come from?

Dustin: Picking a band name is tough. I wanted something short and sweet. Our previous title was Dustin Smith and The Sunday Silos. It seemed like every venue we showed up to on tour had it misspelled or shortened to fit on the display. When looking for a name I wanted something that could be easily accessed via social media outlets. Originally “The Senators” came to mind. Then “The Maydays.” Amongst a thousand that were being tossed around. It came crunch time when we had to submit our masters to the CD printers. In looking up other bands named The Maydays I saw that Maytag was German for Mayday. Something hit a bell and I said let’s be The Maytags!

What was your favorite thing about creating “Marry Ya”?

Andy: Sometimes a song can take a long, long time to come together. That wasn’t the case with “Marry Ya”. I think we laid out the arrangement over the course of just a few rehearsals. It all just sort of fell into place, which feels pretty good when it happens.

What’s the story behind “Love Lines”?

Dustin: I was going through a really tough break up. Not a nasty one. Just a heart breaker. Everything was pretty mutual in realizing that things weren’t going to work out but there was about a year of trying to figure out what we would be next if we weren’t lovers. There was a lot of confusion. A lot of happy times and a lot of sad times. The album explores those emotions I was going through during that process and trying to make sense of it. When Tim and I got together to discuss an instrumental piece for the album, I said I wanted it to have 2 different feels. One that is happy and content. And another that is angry and confused. That led to the Title of the album.

Which song is your favorite off of “Love Lines”?

Dustin: I’d say my favorite track off of Love Lines is “Call Me”. That song went through so much transformation in the year leading up to the session. We tried all sorts of different feels and ideas but it just didn’t seem to be working. About 2 weeks out from the session a new feel came to mind and all the pieces lined up for the first time.

What are you looking forward to the most after “Love Lines” is released?

Andy: Writing more songs! We’ve been so busy getting everything in place for the release and booking for the summer that we haven’t had much time to spare for the kind of open-ended rehearsal that is good for writing. We can get impatient with playing too many similar sets. It will be good to infuse some fresh sounds into the mix.

Do you guys have any unique pre-show rituals?

Andy: I wish we had a more exciting answer for this question, ha ha. Ummm, honestly not really. Before big shows, we usually get together and center ourselves before we go on stage. Kind of block out the distractions, run through the details of the set, talk about any new changes. Other than that I can’t think of anything we do consistently. On the road a lot of times we’re too busy getting merch set up, sound checking, tweaking gear, that kind of thing. It’s different every night.

What’s one thing you want everyone to know about you or your music?

Andy: We really like to make music for the listener, and not just for ourselves. It’s our hope that a listener’s day gets a little better with our music. I’m not sure what else a band could ask for.

Do you guys have a mantra or words to live by?

Dustin: Stay Humble.Work Hard. Be respectful. Be Real. Don’t litter. Be kind to your elders. Look both way before you cross the street. Eat with your mouth closed…etc.

Andy: I’m super into Mignola comics right now, so I guess Hellboy, if I had to pick one. But I love the whole B.P.R.D. these days. Agent Howards is great…Ooh or Dream from Sandman. Gah, I’m not good at this..

What’s next for the Maytags?

Dustin: Looking forward to new music and working in new contexts. We’re going to focus on working with different studios and maybe bring in a producer if it seems fitting. We’re also anxious to explore and grow in different markets. #bandlife

PrevPreviousAndrew Keoghan Discusses New Album, EVERY ORCHID OFFERING, Hones In On Little Details
NextCatch Up With Hockey Dad As They Gear Up For Boronia Album Release + First Headlining U.S. TourNext