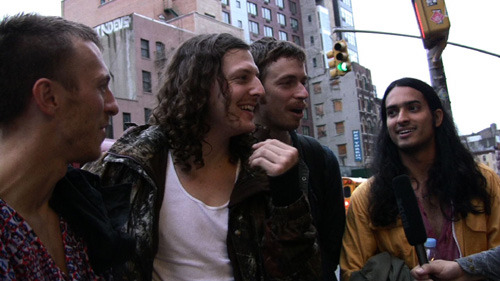 I caught up with Yeasayer at a special Halloween show deep in the jungles of Greenpoint. Huddled on the street outside a warehouse at two am. They were still in their Halloween costumes, laughing and joking like any group of guys who’ve spent a lot of time together, drunk or sober.

Even among the scores of fantastic, overworked bands who were all over CMJ this year, Yeasayer holds a special distinction. They first started hitting it big after this year’s South By Southwest, armed with only a single to sell and a killer live show. Suddenly everyone was talking about them, and by the time CMJ came around, Yeasayer was that one band people wanted to keep an eye on. Those five days saw seven Yeasayer shows – sometimes three in one day.

“It was exhausting,” lead singer Chris Keating says. “I think that by the time we got on stage at Glasslands, after the Fader show, after the Vice thing at 2am, we were like ‘Who cares!’ That’s kind of how it was for the last week and a half. We don’t even remember it all.”

Drummer Luke Fasano had the flu. “I would sleep and then get up and go to a gig and be all over the place.”

At least CMJ was in their home town, and they were among the lucky few who got to drift back to their own homes after a night of hard rockin’. By contrast, SXSW wasn’t so easy. “We all got extremely sick [for SXSW],” says Keating. “I thought Ira [Wolf Tuton, bassist] was going to die one night on a couch at our friend’s house. Me and Luke were both so sick I thought a worm with saw blades was cutting through my guts.”

“Actually I fell asleep after you guys left me,” says Tuton,“and I thought, tonight I think I’m going to die. Seriously, straight up, the truth, I thought I was going to die that night.”

By the time I got to talk with them, CMJ had been over for a week. Since then, Yeasayer had their record release party, hit some weekend shows outside the city, were preparing for a big UK tour, and through it all had been (gasp!) working. In today’s scene hitting it big isn’t measured by stadium tours or Greatest Hits album; rather, you’ve made it when you can quit your day job.

This isn’t much of a surprise to Brooklyn natives, who are more likely than not to run into their favorite musicians counting out quarters at the laundromat, or worse, suited and tied in the costume of the Gainfully Employed. When asked why these guys first moved to New York, most of them said, without sadness or sarcasm, “jobs.”

“It’s the only place where you can work and not have a steady 9-5 job and make enough money to live and work on music as much as you want,” says Keating, a Baltimore native. “It’s exciting. It’s not the same as the Baltimore scene, or the Austin scene. All those guys hang out together. In Baltimore the scene is like what happens over there in that building, and they all live together.”

Brooklyn has done well for Yeasayer, and six months of steady hype has made them pretty optimistic, though still humble. Their first album, All Hour Cymbals, was released in October to overwhelmingly positive reviews and good internet sales, but “I’m just glad to see it in stores that I like,” says Keating. “We went to a store in Baltimore, a store me and Anand [Wilder] used to shop in, in the town that we grew up in. [We asked] ‘You guys have the record?’ ‘It’s sold out.’ ‘Great! How many did you order?’ ‘One!’ And then, we’re leafing through the used bin, and there it is!”

Critics have found All Hour Cymbals hard to peg, usually lumping it in with the few other Brooklyn / Baltimore bands who seem to be making music in a kind of atavistic bubble, taking what pop has soaked into their bones and mixing it with a primal, campfire-like exuberance. This is not to say they’re without influence, but they do seem to be actively ignoring their contemporaries.

“All these guys are like, ‘They’re not a traditional jinga-jinga-jinga rock band, so what are you going to compare them to?’” asks Tuton. “There’s only a handful of bands you can compare them to.” Rusted Root, Rush, Talking Heads, early Animal Collective, even Genesis have been mentioned.

“I don’t want to be in a band where I’m a bass player. That’s lame. So many people are in bands where they’re the bass player. Ugh!” says Tuton, whose fretless often abandons the bass line and doubles the guitar in the upper registers. “Why not trade that melody off through all the instruments that are playing at the same time? Anand plays a melody sometimes, Chris plays a melody sometimes, you know?”

“We’re like a symphony,” says Wilder, half tongue-in-cheek, and laughs.

“That is what I want!” Tuton jumps in. “I want to fulfill different sections of an orchestra.”

On songs like “2080”, all of these elements boil together, both gloomy and hopeful. “My grandmother is really worried about me. She’s a worried about the morbid lyrics,” says Wilder. It’s easy to miss the rays of sunrise piercing the fog of All Hour Cymbals, but that brightness-through-gloom is arguably the most important part of Yeasayer as a band. “It’s balanced. There’s light,” Tuton explains. “You can be positive about certain things while being reserved about others.”