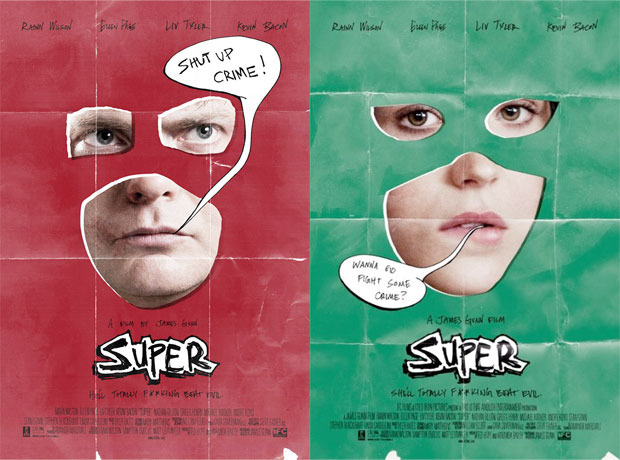 Rainn Wilson's new movie, SUPER, is anything but a feel-good. Funny throughout, gory all the way, it's closer to Burn After Reading than it is to Juno—at least on account of one swift, bullet-ridden death that leaves the audience gasping. But Juno director Jason Reitmen, who hosted the IFC screening of SUPER last night, said he felt the movie was a spin-off of Juno: “But then I think everything is a spin-off of Juno, that's how I look at things”.

Speaking of, Ellen Page puts on a memorable performance as a nut job, Libby, whose satisfaction over gruesome acts of superheroism ends with a taunting “HA. HA. HA”. Director James Gunn, best known for Slither, said he'd met with Ellen beforehand, but there had never been any auditions, “I had never seen her in this role”. She spent her first day, a cold day in Louisiana, driving around in a bra—as the scene calls for—and delivered a memorable, bloody scene that ends with the line, “That's what you get cocksucker!”. Somewhere “in between the panels”, she also rapes Rainn Wilson's character, Frank. “That was really uncomfortable for Ellen,” James said, “She's been raped on screen many times, she said that was easier because your role is more passive when you're getting raped. She wasn't comfortable manhandling another actor who's 6'5″.”

The rape is preceded by an awkward dance Libby does in attempt to seduce Frank. James said he had a hard time not laughing on the set; Jason Reitman said it did a good job of setting up the tone, letting the audience know it's okay to laugh at the rape. Someone asked about Frank's response to Libby's moves, “What are you doing? That's weird”; James said it was Rainn Wilson's off-the-script reaction.

Libby and Frank meet at the comic book store where she's a clerk. A hallucinating “loser” whose wife has just left him for a drug baron, Frank believes he's been chosen by God to fight crime as a super hero. For his weapon he picks the wrench; for his slogan, “Shut up, Crime”. When Libby confirms the secret identity of The Crimson Bolt, she finds her way into being his “kid sidekick”, Boltie. They eventually set out to free Frank's estranged wife Sarah, played by Liv Tyler, from the seductive grasp of the good looking, drug-dealing Kevin Bacon.

Warning that it might sound bad, James said that awkward rape scene was “kind of romantic”: Frank is in love with Sarah, of course, but there's something sad between Libby and him because they obviously love each other and “kind of fit”.

Someone in the audience brought up the recent emergence of other “similar movies”, and asked if Super would've been made without the precedent set by movies like Kickass. James Gunn asked, laughing, “Did you really think this was similar to Kickass?” — I haven't seen it, but on the basis of violence alone, I'd guess the similarities end on the surface. But Gunn said that SUPER was, in fact, made before Kickass; it was a total of 9 years in the making, the script was written back in 2002, when it was originally a story about a stalker who becomes a super hero. The shooting, however, was done over just 24 days. Liv Tyler said that on her first day on set, she was shocked by the speedy pace of production: “Almost half my scenes were filmed on the first day. It was just one or two takes per scene.” Asked about fun while filming, they all agreed on not having had any fun. The schedule was too intensive to leave any room for goofing around. “But that's what's fun for me,” Kevin Bacon said, “Doing more acting than waiting around, which is usually the case.”

Liv Tyler, on the other hand, was impressed by real explosives: “When you film movies like The Incredible Hulk, you don't see anything, they're all added later. But for this film we set a yard on fire, and there were firemen there, which was kind of fun.” Someone asked about the methods behind some of the gory scenes, and James Gunn said most of them were actual prosthetic/make up shots composited over actor shots. Claiming to be comfortable with violence on screen, he said he chose to keep his movie unrated, “In super hero
movies you always see things blowing up, people dying. I wanted to show
the consequences of those things.” Jason asked the actors if the rawness of the movie was apparent in the script. Kevin Bacon said that usually he gets excited over an intense script but the movie gets washed out in its final form, “In this case, it was the opposite.” Someone else was more impressed by the CG-driven “tentacle porn” scene, in which Frank gets his head opened and operated on by God's “tentacles”. James said the visions were somewhat autobiographical since he often gets them: “I'm starting to be more honest about that now. My girlfriend thinks it's something in my frontal lobe.”

When introducing the movie, James said, “I've been idolizing Kevin Bacon ever since I saw him die in Friday the 13th”; he said he was intimidated about working with him, believing all idols to be “dicks”, but the experience proved to be otherwise; he also thanked Liv Tyler, “without whom this movie wouldn't have been made”.

Note: All quotes, though true, have been mildly paraphrased from memory.