Dearling Physique, a singer and producer new to Brooklyn, commenced the night with a progressive electronic set. His music is down tempo, atmospheric, and eerie, sometimes sounding like a Dixieland Jazz record slowed way down by hand. He uses organic drums and growling organs as a soundscape for his far-ranging vocal delivery.

Armed with a boom box, a laptop and a suitcase holding a synthesizer, Dearling Physique multi-tasked his way through an impressive display. He sang, he played solos and filtered the tracks on his synthesizer, worked the laptop, and, with the boom box, provided sound clips from sources like NBC’s “Dimension X” sci-fi radio show in between songs. All the while, he maintained an expressive stage persona, at times falling to the floor, and at others rising and falling with his music’s beat.

After a short set break, Yea Big mounted the stage and stripped down to a track outfit, complete with head and wrist bands. Kid Static joined him (but didn’t strip down) and the show started promptly.

Yea Big and Kid Static hail from Chicago, and it shows in their music. Yea Big’s drums dominate the beats, with crunching snares and explosive kicks machine gunning in almost every measure. Synths, and the occasional sample, provide the melodies for the songs, usually stabbing in and dropping out as fast they entered. The tempo is always pretty fast and some songs venture into House speeds.

Kid Static’s vocals, like the beats, are fast, but extremely well-paced and enunciated perfectly. It’s rare in a live show that you can hear everything the vocalist says, but Kid Static didn’t allow for anyone to miss a word, and that’s important, considering how topical the lyrics are. They did songs about Chicago, driving, metal heads threatening to kick a sandwich out of Yea Big’s hand, an epic tribute to Mega Man…

Perhaps more impressive then their beats or wordsmith was the feral energy they offered up throughout their set. Instead of standing behind turntables, Yea Big acted as Kid Static’s hype man, and good lord was it effective. The audience was treated to choreographed dances, screaming sessions, bench organization – which was more fun to watch than it sounds, and dance-offs. They did two covers as well, the first being Joe Esposito’s “You’re the Best Around”, made famous in 1984’s Karate Kid, and the other, The Golden Girls’ theme, where they took the time to thank the audience for “being a friend.” Yea Big put the running outfit to good use by taking a victory lap through the crowd and slapping everyone’s hand, making it seem as if we’d done all his work. As if we deserved the praise.

This is a welcome change in the realm of hip hop. This was one of those rare shows where the performers worked for the audience, and not the other way around. Instead of beating the audience down, demanding repetition of words or cursing at us to get our hands in the air, Yea Big and Kid Static’s seemed to expect and ask nothing. Even more amazing is that the show was under attended and they still performed as hard as they could and never once complained. All hip hop acts should try to catch their show at least once and take notes on how to connect with the crowd, because every rap fan today will tell you that showing up an hour and a half late and insisting they say irrelevant phrases louder and louder doesn’t work anymore, if it ever did. Everyone who was there had a great time and it was all due to the bands’ enthusiasm for their work and their respect for the audience. 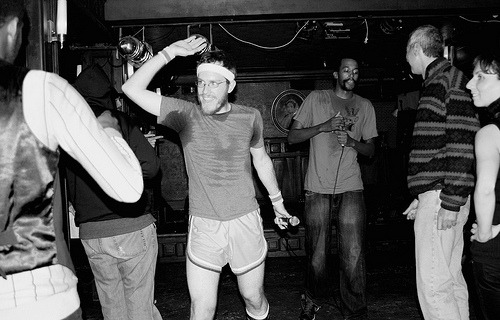