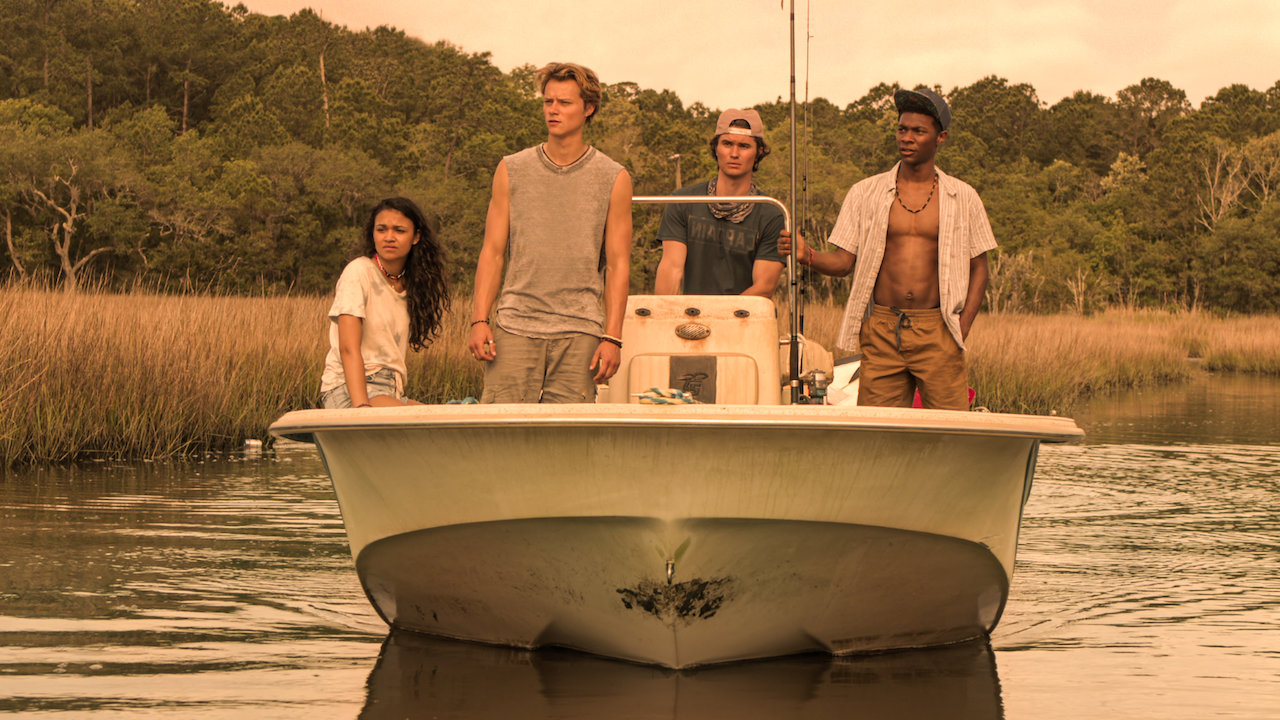 The addictively silly Netflix teen drama series returns for another round of treasure hunting, psychotic parenting & other preposterous hijinks

The rain is pounding, the waves are pummeling, and the boat is about to capsize. “I’D RATHER DIE THAN GO TO PRISON!” John B yells. “I’D RATHER DIE THAN NOT BE WITH YOU!” Sarah yells back, right before the fugitive teenage lovers speed head-on into an oncoming hurricane, with an armada of coast guard and sheriff patrol boats on their tail. Basically a Thelma & Louise suicide move.

This is the climactic scene of season 1 of Outer Banks, Netflix’s wildly popular teen drama series that returns tonight for another round of treasure hunting, psychotic parenting, and other preposterous melodramatic hijinks. What’s supposed to be a tremendously moving moment instead has me bawling tears of laughter. And yet, I can’t get enough of it.

Teen drama series are a dime a dozen. You either go down in the history books like Beverly Hills 90210 or you wind up forgotten and buried like its reboot 90210. For every classic like Gossip Girl, Skins or One Tree Hill, there’s short-lived duds like Young Americans, Hidden Palms, and Life As We Know It (I bet you haven’t even heard of those). And quality rarely has much to do with it. In fact, a lack of quality can sometimes be the ingredient that conjures a legendary teen soap opera. You’ve gotta walk that fine line of corny dialogue, basic character archetypes, high stakes melodrama, and maybe just a dash of sincere emotional realism. That’s the winning ticket that Outer Banks cashes.

When Outer Banks debuted last year early in the pandemic, it proved to be catnip for the CW-adjacent crowd. On paper, it had it all. A cast of hot 20-somethings playing teenagers? Check. A juicy central murder mystery (this one with a treasure hunting twist)? Check. Gorgeous shooting locations that pop on screen? Check. High drama that escalates in really crazy ways? Check. Extremely bad parenting? CHECK. Oh, and since it’s on Netflix, the characters are allowed to swear and do drugs and everything’s just a bit more navel-gazy? Sure, why not.

But what separated Outer Banks from the rest of the pack was just how intensely the show committed to its premise. Like Sarah and John B on the boat, the show plows full steam ahead into its own hurricane of batshit insanity. And every writer, director, cinematographer, and actor involved is fully onboard with it. It’s a level of commitment that you just have to admire – especially the more preposterous (there I go using that word again) things gets.

I’ve already spoiled quite a bit, but if you want to avoid all of the spoilers, then I’d stop reading altogether. Here’s a rundown:

Outer Banks takes place on, you guessed it, the Outer Banks, a series of barrier islands off the coast of North Carolina, in a town that our main character John B describes in the trailer as “the sort of place where you either have two jobs or two houses.” John B and his friends Kie, Pope and JJ – who call themselves the “Pogues” – belong in the latter category, spending their summers “bussing tables and running charters” for the upper crust while also doing plenty of drinking, surfing, tooling around on their junky fishing boat, and getting into scuffles with the preppy “Kooks” at beach parties.

John B is a rebellious kid, but he’s good at heart. A year earlier his dad mysteriously vanished, and now John B spends his time getting into trouble and dodging the local sheriff, who seems determined to throw him into a foster home.

One day while cruising along the shore, John B and the Pogues stumble upon a sunken boat and and a stash full of clues and maps pointing them to John B’s missing father, as well as a trail potentially headed toward a gold treasure from a legendary shipwreck – a very rich fortune. And so the stage is set.

What starts as a giddy, light-hearted treasure hunting romp and search for John B’s dad eventually turns deadly serious. Soon, their mission puts them in the crosshairs of John B’s dad’s former boss Ward Cameron, a wealthy businessman and ultra-powerful figure in Outer Banks who is also after the treasure, and who will do anything it takes to get his hands on it. He also may or may not know more about John B’s dad’s disappearance (*cough* he does!). Also, John B falls madly in love with Ward’s daughter Sarah, because of course he does. And then there’s Ward’s son and Sarah’s older brother Rafe, probably the biggest psycho in a show full of them.

And then Outer Banks goes from 0 to 100 real fast. Before you know it, John B is framed for murdering the sheriff, becomes the target of an island-wide fugitive manhunt with sheriffs, coast guard and military in pursuit, and which eventually ends with him and Sarah driving a boat straight into a literal fucking tsunami. There’s also a crazy drug dealer who pops up in the most random times to terrorize everyone, just because. Basic teen drama tropes, you know.

This might all sound like silly nonsense, but in an addictively campy way, it all works. Outer Banks has a lot of elements going for it. First of all, the shooting locations are pure eye candy and go a long way towards rendering that escapist fantasy vibe that the show’s aiming for. I’m pretty sure the it was actually filmed in South Carolina, but fuck it, seemed legit to me! Second, the cast is impossibly attractive. The 16-year-old John B is played by 27-year-old Chase Stokes, which for a teen drama series is par for the course. In any case, none of the actors look their age. The young adults are played by 30-year-olds, and the teens are played by 20-somethings. The only actual teenage cast member is 18, and she plays a 14-year-old. But it’s okay! Because they’re all pretty and fresh-faced and look good in summer weather (and it’s just better off that way for a litany of other off-camera reasons). On top of that, the show’s central focus on the treasure hunting angle is actually a good storyline that always keeps the missing person/murder mystery aspects moving in a fun and unique way. Things might get ridiculous, but they never get boring. In fact, it’s all wildly entertaining.

But again, the reason Outer Banks works is because it fully commits to its concept. It never holds back, but rather goes all-in at every turn. And every other element of the show falls right in line. The montages of beautiful shorelines and hot beach bods – dosed with glossy, transfixing cinematography – makes for an intoxicating viewing experience. The show panders hard to the romance shippers, indulging them in every love triangle you could come up with. The writing is utterly absurd, but that’s kind of the point. The plot simply snowballs and escalates to the point where once you think things couldn’t possibly get more intense, they somehow do.

Thankfully the actors are all game, slinging that juicy B-movie dialogue with such steely, straight-faced intensity that you can’t help but go along with it all. In fact, the acting is uniformly good. Stokes imbues John B with the right balance of swagger and vulnerability. Through all the dramatic twists and turns, you always empathize with John B, and it’s important to have that grounded audience cypher in such an over-the-top, unreal universe. Meanwhile, the actors who round out the Pogues have a genuine onscreen rapport, and you definitely buy their camaraderie. Furthermore, Stokes and Madelyn Cline, the actress who plays Sarah, have undeniably fiery chemistry.

But of course, there’s one actor in particular who steals the show: the actor who plays Ward, Charles Esten, who also played Jim’s boss at the Stamford branch in The Office and was an OG cast member on Who’s Line Is It Anyway? Yeah, THAT guy. I’ve never seen Nashville and was unaware of his dramatic chops, so I did not expect an affable funnyman like Esten to be able to pull off that perfect balance of cunning charm and unbridled evil. As Ward, he goes full throttle, exuding a haunted, maniacal look in his eyes that absolutely suggests that he would murder his daughter’s boyfriend just to get the gold. Here, Esten portrays a real scumbag villain, at one point going so far as to imprison his own daughter in order to cover up his misdeeds. And when I say imprison, I mean he physically holds her captive. Diabolical stuff, and just one of the many examples of bad parenting on Outer Banks. So yeah, lots of psychos and lots of bad dads. Again, standard teen drama things.

As season 1 stretched the drama to extreme breaking points, one has to wonder what’s in store for season 2. We know that John B and Sarah barely survived the storm, miraculously rescued by a cargo ship bound for the Bahamas (which just so conveniently happens to be where the gold is headed). We can assume that everyone back on the Outer Banks thinks they’re dead, which should provide for plenty of histrionic melodrama. But it’s anyone’s guess what insane detours the show will explore next. After season 1’s trajectory, there’s no point in even speculating. What unfolds will most likely be balls-to-the-wall entertainment.

Although I’ve just talked a lot of crap about this show, it should also be noted that when the first season dropped, I binged it all in one sitting. So it’s obviously doing something right. Outer Banks is not great TV. Hell, it’s not even good TV. But it is deliciously campy trash. And you can bet your ass that I’ll be glued to my screen as soon as that second season drops tonight.