Days of Abandon – The Pains of Being Pure at Heart 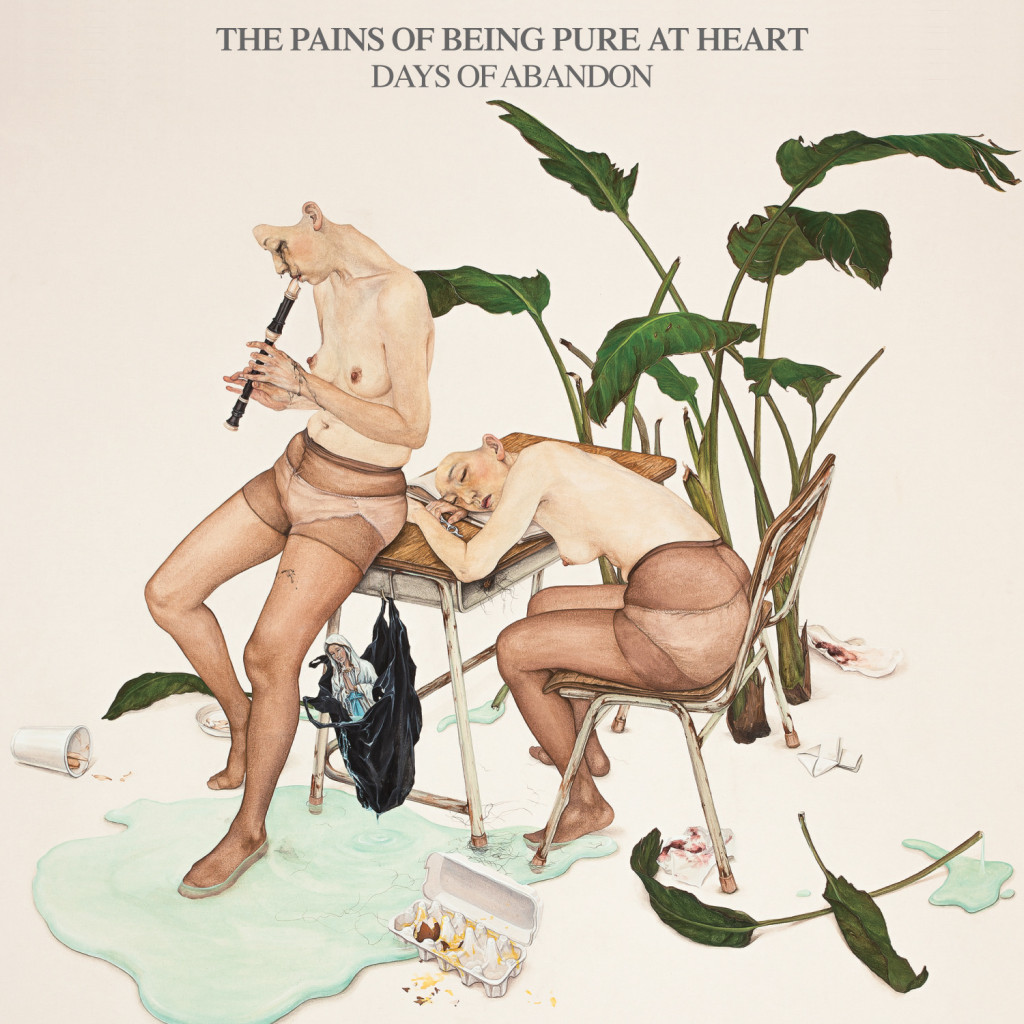 The emotive twee of Brooklyn's Pains of Being Pure at Heart, and maybe their name is enough, was first distilled in the videos for the band's first songs, “Everything With You” and “Young Adult Friction”. Both were needlessly shot on Super 8 film, before the Instagram and Hipstamatic app users insisted that everything from 2010-present would be filtered with facsimile nostalgia. This aesthetic suited the band and the songs, an alternately maudlin and optimistic world, a place where everything was happening all the time, a time you remembered that was also happening now. Perfect for reliving a New York that was decidely gone, and listen to those guitars, even now “Everything With You” would go well on a mixtape for a girl or a boy who you knew liked the Cure. We could relive the late 80s and early 90s if we closed—or maybe opened—our eyes hard enough. Latest album, Days of Abandon, a title that like eponym of the band in question seems to suggest a certain thrashing emotion, breaks with some of their earlier work, trading fuzz for gloss, while remaining steeped in the memories of everything from Belle and Sebastian, Robert Smith and the Elephant 6 bands.

The album opens to the down-tempo, acoustic, “Art Smock” and its seemingly earnest anxiousness over change—”I wanna know what happened to you” are the record's first lyrics. Singer Kip Berman describes the costume of selling out: “You learned to mingle with the well-bred crowd, straightened your hair, forgot all about torn jeans and sweaters from the lost and found, dropped some pounds and the people that you used to hang around.” This would pass for a deep burn if it weren't already the plot of Can't Buy Me Love and parsing these lyrics presents the opportunity to get lost in the tropes of modern hipster nostalgia. Berman either doesn't gather that torn jeans and sweaters from the lost and found are now on sale at Urban Outfitters or he thinks he can resell the concept of the sell-out when everything is already on sale. As for the connection of weight-loss to popularity, a downright adolescent assumption, the listener assumes that Berman has, at some point in his experience as a New Yorker, been on the L-train, which features a crowd of people who strive to easily fit into the same skinny, ripped jeans on sale at the Urban Outfitters off the line's Union Square stop. Berman still lives in a Belle and Sebastian world, a world of cool kids and uncool kids, without seeming to realize that both Belle and Sebastian and the uncool kids are cool now. Hell, Pains of Being Pure at Heart are sort of cool for exactly this reason. Everyone is cool now; cool sort of doesn't exist anymore, at least in the fashion Berman figures it. Dominant culture with its stupid misogyny and homophobia lost and is still losing. This fantasy of the under-appreciated or picked-on outsider is more gone than ever, and yet Berman opens the record to resell his listeners on this copy of a copy of a copy.

From its opener, Days of Abandon combines the pleasures of unmitigated production gloss and generic, lachrymose lyrics. Twin songs, “Simple and Sure”, which the listener must assume isn't an ironic cipher for all that goes wrong on Days of Abandon, and “Kelly” both head for the top of the room. The synthesizers and hi-fi guitars collide in cloud-clearing fashion, syrupy vocals that recall the repackaging of the same aesthetic that Torquil Campbell and Amy Milan did so successfully on a song like “Elevator Love Letter”. On “Simple and Sure”, Berman moans, “I just want to be yours” as the arrangement explodes in brilliant color around him. Other acts have sold similarly insouciant notions without losing their authenticity. But the decrying of the hetro-normative world, or the notion that Ally Sheedy was, in fact, the hottest girl in The Breakfast Club, or, to crib from the same movie, the idea that everyone was fucked up and cool at the same time, is a project well underway, a project that doesn't need Berman's winsome “ohs”. That judgement day already happened. When Jen Goma sings about “the end of the world” on “Kelly”, a song that owes a great deal to “The Love Cats”, this isn't the apocalypse to which she refers.

Of course, none of this goes to say that Days of Abandon is, in any explicit sense, bad. It just wilts under any sort of critical analysis and isn't good enough to avoid the treatment. Like so many who felt feelings in the face of a song as absurd as “Friday I'm In Love”, there isn't anything wrong with blithe pop, but songs like “Until The Sun Explodes” and its follower, “Life After Life” don't reveal either the sophistication of the counter-narrative or the undeniable hooks that made Cure songs meaningful instead of silly. Berman isn't kidding when he churns through a lyric like, “Say to me you'll stay with me until the sun explodes,” a line no dumber than “Sunday always comes too late, but Friday never hesitates,” but one that doesn't come with requisite hook to stampede the critical mind. Pains of Being Pure at Heart begin to suggest a playful side, more Smiths than Robert Smith, on a song like “Masokissed”, but the proportions of seriousness to glib are already fatally out of balance here.

It isn't just that this universe in which the Pains of Being Pure at Heart exist doesn't exist, it's that this world was already built and destroyed by other bands. Even Belle and Sebastian struggled with the weight of their own narrative (What happens when you get cool for writing about how uncool kids aren't cool?), finally calling things what they were on most recent LP, Belle and Sebastian Write About Love. So this isn't to suggest that Pains of Being Pure at Heart could ever go back to 2009, a time when they were already hopelessly derivative. They were always cast backwards. Their time was gone before they ever sought to claim it. They did make good pop then, regardless of footnotes, and there are some winning moments here. The final song, “The Asp In My Chest”, the slowest song other than “Art Smock”, sounds like a dead-ringer for the melody and chord progression from Jens Lekman's “Black Cab”. It is damning and sad to think that the best moments on Days of Abandon remind the listener of other things, an unpleasant deja-vu. Lekman may well have been trying to break or mend hearts on “Black Cab”, a truly sad-ass exegesis, and Pains of Being Pure at Heart seem distressingly unable to capture either brand of pathos on Days of Abandon. The meaning of all this is somewhere behind us in time. The past is so bright, you'll have to wear Wayfarers, except everyone is already wearing them.

PrevPreviousMore Than Any Other Day – Ought
NextAustin Psych Fest 2014: Day 3Next