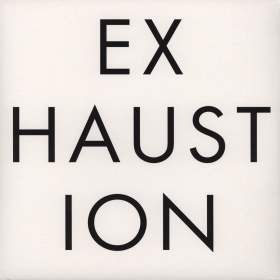 A black and white cover declares only “EXHAUSTION” in a bland typeface. The typeface is thin and meek but each letter is capitalized, narrowly staking their claim to the square album cover. Amongst the indie doodles, punk scrawl and sycophantic psychedelic rehashing constituting modern album art, it’s easy to ignore. There’s a fourth class of new album covers, though and Exhaustion doesn’t march to their rank-and-file either. Newfangled moody rockers are on to the blockish Factory Records cover art of designers like Peter Saville and Mark Farrow. But, it’s through a generation’s post-millennial Photoshop precociousness that enables slick design before conceptual development. Factory Records’ visual sensibility reflected the grim terror of Manchester’s sociopolitical conditions. Its new equivalent reflects only the past and usually just looks grim and terrible.

Exhaustion’s album cover doesn’t align the Australian trio with anything. It's Australian and unhappy so readers can make their own assumptions and draw the comparisons this review doesn’t waste words with. Exhaustion doesn’t dictate a sound or association, but the band name invites speculation. Are the members exhausted after playing these songs? Are they petered out from arranging a string section? Are they tired of touring with a cumbersome Hammond organ?

Set the record spinning. It’s all there. Exhaustion was down-trodden and resigned before the opening track “Don’t Fly Right” was conceived. Guitars creak like a predator nudging through the doorway and dissonant atmospherics swirl in nebulous negativity before the groove sets in. Most tracks take time to coalesce into a song. Minimal drum beats congeal with circular bass lines. Errant cymbals crash and the extraneous six-string noise fills all of the space in between. Exhaustion aims for druggy looseness, but they can’t shake the feel of a live band intuiting each other’s nuanced performance.

The vocals drawl like anguished invocations, but there’s humor too. A sociopath casting hexes with glee, striking down your psyche and chuckling about it. At their most unnerving, Exhaustion’s vocals are also childish. “Old Mickey” takes nearly two and a half minutes to settle into a back-beat. Before that, guitar ambiance rustles and clacks while the vocals emit only a few lines, each syllable extended to its greatest length like a baby babbling distorted by a nightmare. Seven and a half minute opus “Moon Out Tonight,” which is actually a twisted cover of The Capris’ doo-wop classic “There’s a Moon Out Tonight,” begins like a love song and ends in implied disaster. It slows a “Be My Baby” drum beat to half time. Its chord progression would be catchy at regular speed, but Exhaustion relegates it to Future Eaters’ morose pace. It ends in a dissonant mess, casting doubts on love and the worthiness of telling its story to begin with.

Future Eaters is a petulant child sulking in the corner because it doesn’t play nice with class mates. Yet, for all of its deliberate angsty brooding, Exhaustion delivers a potent downer encased in a smooth capsule. Its the anti-social classroom miscreant dumping glue in a popular girls’ hair, but the malevolence charms other parents who won’t admit it. Exhaustion aspires to repulse an audience, but unintentionally endears another.