Man On The Moon II: The Legend of Mr. Rager – KiD CuDi 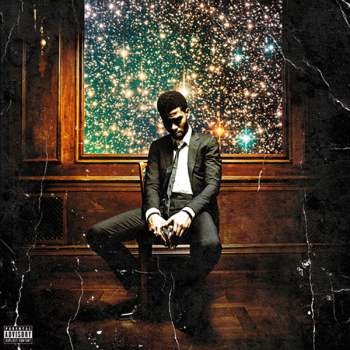 KiD CuDi could benefit from the words of GLC, “my brother told me along time ago, don't focus where you been, G/ focus where you're trying to go” on “The End”. GLC's slow drawl on “The End” recall the prophetic and poetic street musings of Big Rube, the man Outkast once included in their earlier, more thoughtful songs. “The End” feels as though it was looted from
the Organized Noise vaults in a section marked “circa ATLiens” and it could have been a fitting end to the lonely travels of Mr. Rager, but CuDi's yearning for our admiration obscured his vision for Man On The Moon II: The Legend of Mr. Rager.

The Nickelodeoan-ready video for “Erase Me” (featuring
cameos by nerdy young Hollywood renditioning a Hendrix and The Experience
charade), is hardly fitting of the lonely stoner we’re supposed to believe is
out there walking along the fringes. “Erase Me” is arena pop swill, a frustrating misstep wedged into a record not meant for the ears of
children. The controversial exposé with Complex
that painted KiD CuDi as a proud braggart, all too eager to disclose what songs were
recorded on what drugs, yet simultaneously denouncing cocaine – CuDi’s learned
his lesson ya’ll, just psychedelics and weed – is Mr. Rager, the real CuDi. His unfolding legend is riddled with ego-mania, aggression, isolation and depravity. As painful as it is to see CuDi struggle to prove his
legitimacy as an artist, it would be of his better interest to refrain from
interviews entirely and remain in the studio, clawing at those genius
aspirations he so longingly pines over. After several listens to Man On The Moon II: The Legend of Mr. Rager
I’m of the impression that CuDi could achieve iconic status if he doesn’t trip
on his own dang wing-tips.

Separated into five “Acts”, Mr. Rager is ripe with cinematic aspirations of breaking through to
the other side. His first breakthrough comes in the Sgt. Pepper waltz of “REVOFEV” and the psyche-ridden stretch
from “We Aite (Wake Your Mind UP)” drifting into “Marijuana”. These meditative
departures earn CuDi the privilege to talk hella smack on “Mojo So Dope”
and “Ashin’ Kusher”. To take it further, the meticulous attention to detail and
progression within these songs (within those “Acts”), justify his hubris in informing Complex, “I'm unfuckwittable; no one can knock me off my shit. I'm an
unstoppable force, I'm a bullet. My trajectory is to the sky.”

Cudi wants us to think he's a satellite, not meant for contact, yet his brooding ruminations on the shallow noise of the club scene on “The Mood” or harsh reality of “bumps in the
day, keepin’ blunts to burn” on “Wildin’ Cuz I’m Young” are not that unobtainable. Relating to the legend of Mr. Rager is supposed to be reserved for those who chose
to challenge mortality, just to sniff death’s cold breath and know its limits
of reach. Each Act has a setting, be it alone and stoned or alone in the club or
alone in orbit. By the time we reach “These Worries,” which features
Mary J. Blige, it's glaringly obvious CuDi needs his isolation, as long
as he's not isolated to the point of losing awareness of our concerns with his loneliness.

Unfortunately, KiD
CuDi did not heed the words of GLC. “The
End” is announced with 12-minutes remaining before the actual end of Mr. Rager. The story carries on with a potential melancholy ending in “All Along”, a good place to leave us as his point is proven. Instead he takes his loneliness to the supernatural with the triumphant squeal of
horn-blasts on “Ghost!,” but again, not satisfied, CuDi dodges spiritual
transformation to rejoin with his physical form and just hangs out in his head. (Wait,
what?)

We are led to believe Mr. Rager will be an extravagant journey by a mythical character capable of
living on the moon, cheating death while indulging in the delicacies of
synthetic cocktails, but CuDi closes with “Trapped In My Mind,” like we care about the thoughts of some dude from Cleveland. It's a poorly-written ending you’d expect from a teenager who just saw his first M. Night Shyamalan
film. From all I’ve read on CuDi’s recording habits, how he works on multiple
songs at once, embodying the song “Maniac”, I want to sympathize with his reluctance
to let go of Mr. Rager. Deciding the
final track list of such a cathartic record must have been a terrible bother,
riddled with doubt. But to go with an overkill in endings, instead of holding on to a couple
closers for the future, tarnishes the legend. As CuDi seeks our approval and genius verifications, my hope is that GLC's prophetic words are also trapped in his mind and resonating above his ego's overreactions.