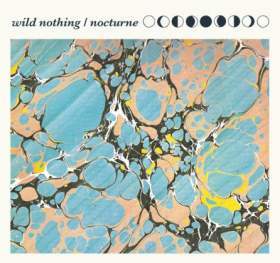 Wild Nothing never made any secret about his genealogy. Back in 2009, Jack Tatum, Wild Nothing's brainchild, released a series of rough recordings, one of which was an self-aware and lush version of Kate Bush standard, “Cloudbusting.” It was at once urgently pretty and landed him a record deal. Which is not to say there is a direct path between sophomore LP, Nocturne and mid-1980s Bush knock-off tropes – though the opening 10-seconds of “Midnight Song” very nearly suggest the “It's in the trees!” invocation from “Hounds of Love.” Straight lines won't work here, but telomeres do. Wild Nothing's pop derivation, a polyglot arrangement of influences, is predicated on the notion that Tatum recycles these pop chromosomes self-consciously – in the same the way that no one gets on your case about having your mother's eyes or telling your grandfather's jokes. The dreamy, wistful pop of Nocturne is borrowed, inherited, even in its most stirring moments, a seasick pastiche so immaculate it makes the room spin.

Like any vaguely fated familial tree, Nocturne is equal parts claustrophobic and familiar, not strictly a break up record and not strictly a research project: a pleasant and problematic evolution. At moments Wild Nothing recalls the swimming, throwback pop recently reclaimed by the Smith Westerns.”Only Heather,” lead track, “Shadow” and the eponymous single, “Nocturne” all serve as mild versions of exactly this aesthetic – Teenage Fanclub fans would date the footnotes further back. Tatum retreats into lyrical incoherence, demurring one moment, “I tried to feel something for you,” and lithely promising, “You can have me” the next. The Wild Nothing sound coalesces in dizzying perfection on the layered and exhausting “Through The Grass,” all the boldness of sounding like Tears For Fears in almost the same moment as an Adult Contemporary guitar rains down from the post-chorus, lyrics finally both coming and going on a line that recedes the minute you hear it: “I let you go/you let me in/I want you.”

This directionality, the tidal coming and going of Nocturne,governs the style and thematic choices throughout. At its finest moments, the album breathes, inhaling all these influences, all this pain, these girl's names (“Rheya,” “Only Heather”) and exhaling something approaching pathos. At its most trying it badly cribs the faux menace of early career Cure on “The Blue Dress,” where even potentially blistering lines like “my desire's come undone” feel wasted and overwrought. Perhaps none of this is strictly Tatum's fault, caught somewhere between remaking all the things that made him and fashioning a new genome for others to marvel at and later borrow. The whirring Reading Rainbow synths of album closer, “Rheya” indicate as much, Wild Nothing charting new ground while, lyrically, trying to forget about a girl who came out of the ocean, maybe even Kate Bush cast as the tetrapod, throwing herself up on the sand and sentencing everything else to follow.