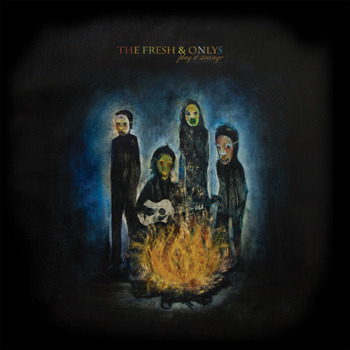 Perhaps the common outsider perspective of San Franciscans as the “weird-left wing-Lefty O’Doul-loving Other” can be blamed, but the ever-talented Fresh & Onlys ride the current Bay Area wave of “we'll show you!” activity alongside the Mantles, Grass Widow, Sonny and the Sunsets, Thee Oh Sees, Ty Segal, Royal Baths, and of course our Giants, who won us the World Series.

The Fresh & Onlys bombard Play It Strange with a sound that makes it seem that these guys have been touring for decades. Heralded as a working class band, they are iconic figures around the Upper Haight district and to anyone who has seen them play at Café Du Nord, The Rickshaw Stop or an instore at Amoeba Records. What shines about them on Play It Strange is their love of classical garage, from pop to surf, as seen in the transition from the wind-tunnel-warped mellow groover “Summer of Love” to the surf guitar on “Waterfall.” They pick it up on Play It Strange with some minor key organ, more surf guitar, and faster tempo Dick Dale style of staccato plucked rhythm guitar (low E string from the seventh fret to the first!).

“Tropical Island Suite” sounds like “Joy to the World” the rock opera. No kidding, it goes on for 7:48 and will have you singing along to the band’s holiday yuletide-like refrain of “who are we.” “All Shook Up” has a classic Roy Loney ‘Groovies thing happening but again it is a testament to the band’s proper catalogue of taste that they can run through a barrage of influences but remain Fresh and also Only. (See the timeless r n’ r on “Be My Hooker” for further proof.) “Fascinated” captures their immediate pop craft while “Plague of Frogs” will have you pondering what could have happened if Moses and the Pharaoh of the Exodus smoothed out their differences busting boards on the Egyptian shores of the Red Sea.

They let an inner feminist air out on the rocking “Who Needs a Man”, and provide some twangy roots Americana rock on “Red Light Green Light”. They slow it down and even bust out some vintage synth/organ/I don’t know what on “I’m a Thief.” This closer moves with the sway of a fifties ballad with frontman Timothy Cohen riding into the sunset singing, “Well I’m a thief and I’ll take anything I need and I think that your heart belongs to me,” before offering his instructions for devout fidelity.

Impressive things happening here. While Play It Strangeis molded together by its influences (and genuine song craftsmanship), it never sounds pointlessly anchored in tired nostalgia. Rather, the band plays with a cadence that “The Surfer Blood” has attempted to capitalize; thankfully F&O do so with skill and taste. These aforementioned Bloodz are better left for the folks who read Rolling Stone for the music articles instead of the political. The Fresh & Onlys deserve your attention and even P4K likes them enough to have given them an 8.0, (but no “Best New Music” sticker). (The same with our boy Waka Flocka’s Flockaveli; an 8.0 and no sticker!) Allow me to endorse the Fresh & Onlys’ Play It Strange as some of today’s best music; stamped, stickered, blue ribbon and all.