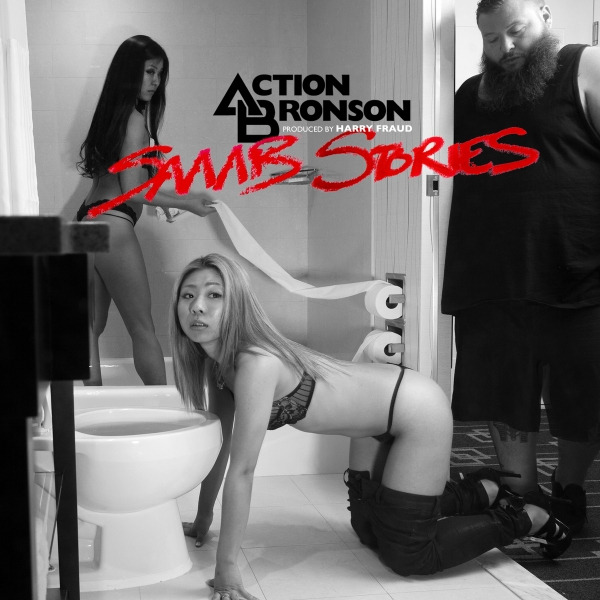 At face value, SAAAB Stories is a million dollar pun that’s going to trigger smirks, chortles, and tips of the proverbial hat. The title paired with the presence of career-maker Harry Fraud will attract new fans of all walks, particularly the weirdos Bronson embraces most. Beyond the wordplay, it’s rooted in Bronson’s childhood – both parents were Saab owners. Therein lies the chef’s ingredient or inspirational thread for Bronson’s yarns of crime ascension, deception, and redemption. An EP often casts negative reactions either for sacrificial brevity or cashing-in dismissal, but SAAAB Stories equips the listener in many vehicles – from Civics to Beamers – in order to recast Bronson as the neighborhood underdog who made it.

When SAAAB Stories dropped, I could have written it off in a format similar to the one I employed for Rare Chandeliers – a list-cle entitled Top 10 Moments I Fucks With This Too. A reappearance by Big Body Bes for more Wu-skit musings in the opening minutes can make it seem as though it’s another Bronson record good for rating the quotables and obscure references. Opener “72 Virgins” – a reference to a martyr’s reward – triggers thoughts of a Rare Chandeliers extension record, but Bronson & Fraud are not interested in a fictional -sploitation flick starring Bronson the wolf fur vigilante.

Bronson’s well of extraordinary braggadocio remains plentiful with Marty Jannety, Mutumbo’s finger, Shawn Kemp’s Kamikaze shoe line, and Jose Canseco name checked, but SAAAB Stories serves as a reminder piece that he’s unique to the genre no matter how many times interviewees lazily reference the Ghostface comparison. Any kneejerk reaction to passively indulge in SAAAB Stories will lead to a blown ACL. The EP has its distractions – a Hot 97-worthy single (“Strictly 4 My Jeeps”) and marquee guest appearances from Prodigy, Raekwon and (groan) Wiz Khalifa – but I can’t help hearing Bronson fight against their presence to tell a story of a kingpin in a pair of Shawn Kemps.

Whether it’s Fraud’s delicacy – seemingly sidestepping the spotlight to manipulate a sound that never casts shadows on the rapper – or Bronson’s trimming of his own persona, SAAAB Stories is less concerned with impressing or entertaining for the sake of garnish. Compare The Alchemist’s offering on “Blood Of The Goat” – pure slasher flick paranoia – versus Fraud’s restrained Italian cinema on “Seven Series Triplets”. Bronson’s given room to outline the setting, before Fraud steps in with a progression that heightens the anxieties of the mafioso tale. By the time those haunting keys arrive, Bronson’s written himself as a made man possessing true power (snap my fingers, you’ll be laying on the foyer steps), but drunk off that power, he recklessly crashes his 525i into a deer. Many will linger on the two-part hooker’s tale of “Alligator”, but it only took one verse on “Seven Series Triplets” to eclipse two of rap’s most harrowing storytellers. Prodigy bordered on self-referential to his “Shook Ones” classic with “I see your heart beating out your shirt, nervous”, while The Chef sounds as though he’s abridging stories he’s bored with telling. It’s Action who explores the rise, the over-extension, and the inevitable collapse of a kingpin and relates it all to pair of Reeboks manufactured in ‘95 – the same year the brand awarded Kemp with the Kamikaze line after back to back All-Star bids.

There’s Action Bronson the chef of Albanian descent turned rapper – that’s what we see. Then there’s Action Bronson, the character written by Arian Asllani who’s life of crime and exploits can be compared to the rise and fall of NBA star Shawn Kemp. It’s easy to miss that by typecasting Asllani as Bronson the WWF historian, gastronome, and portly stoner. Write it off for being a Spotify exclusive stream or a release with no mention of physical pressing despite financial backing from VICE/Atlantic, but Bronson isn't at fault for those shortcomings nor the guest appearances that distract from the story – he holds up his end of the bargain with his finest body of work since Blue Chips.