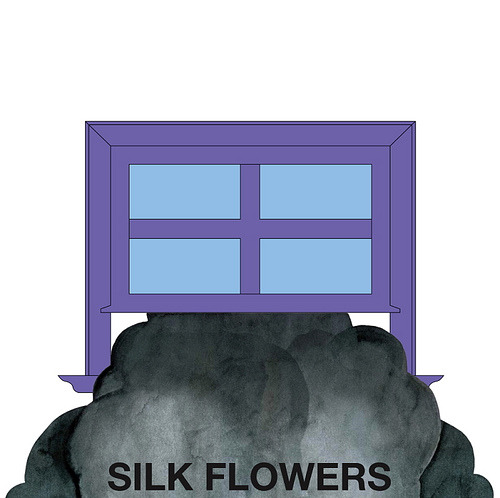 For our take on why Silk Flower's self-titled album sucks, go here.

If you've ever seen Silk Flowers play, you'll notice they hang one of those Scream masks on stage while the three of them seamlessly replicate what you're getting on their self-titled debut. In essence, we're watching them perform, but we're also not watching everything that might broil under the surface of their sleek, careful tonalities. This is restrained music, one that never crosses into outright emotionalism, remains detached and dark, and is always somewhat nostalgic for an ulterior dimension where saw-tooth synths spin recollect lost melodies. “Sand” is a great example of this. Silky synth intro straight outta Castylevania, loungy as it is minor and desultory, avoids drama in the mid-tempo, while static dynamics and a gurgling sample careen past the stereo imaging but never break open your or anyone else's skull.

Those samples, courtesy Ethan Swan, are perhaps the most contemporary thing about Silk Flowers (unless you want to call them carefully pruned takes on the early industrial of 20JFG's and the like). The swooshes and washes might stir up some sort of sibling rivalry with the high-saturation trend in any number of Joe Noise outfits, but even as it immerses us in baths of atonal fuzz at its highest point in “Cheap Shot,” Silk Flower noise samples are always thrown into the mix as intimations of chaos, not chaos outright: there's no escalation, no increasingly claustrophobic density here; synths rise from the electric storm to disperse the noise clouds.

The album happens to appear at a time when groups like Teengirl Fantasy revive a critical interest in druggy dance music, but the SF debut seems to hedge on the late 70s and early 80s for its signs, along with some early house, and doesn't get much closer to anything recognizably referential. The opening to “Flash of Light” relies on chugging synth sequences beneath sustained chordal washes of a Trans Europe Express track, and it's a trick that comes back regularly in “Sand” and “Running Out of Rope.”

And if there's a beacon of restraint, take Aviram Cohen's unsettled vocals as a missing link between Ian Curtis' silkier, now-accessible baritone and the harder to digest agitations of Russian Tsaralag and Shaun Reed in Wet Hair. It quavers, and sputters, but neither burns out nor flares up.

More important than any dissection of where exactly Silk Flowers come from though, is the fact that they're talented melodicists, with keyboard lines by Peter Schuette that are both impressionistic and moody, and that burn into your brain. Go to “In This Place” for confirmation, where saw-tooths are dropped for a meloncholy piano melody recorded as if falling through an aquarium tank and where their echo tap drums bow out to a kick and tambourine. Shit's still creepy, distant, catchy, in quite the same way as the rest of the album. Makes you want to see what they'll do next.