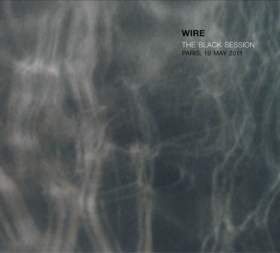 After thirty-five years Colin Newman, Graham Lewis and Robert Grey are still finding the motivation, somewhere, to carry on the immense and daunting Wire legacy, although the batteries might finally be running low in 2012.

This is a 13-song live album culled from a session at the Radio France Studio, during the tail end of a tour that followed the release of Wire’s twelfth album, Red Barked Tree. Despite the fact that the Wire website called it “enthusiastic,” the invited audience at this show is so quiet at the beginning that you can hear a pin drop, literally.

Reportedly, this is an accurate rendering of the live set they were performing on the tour, and they open with the subdued “Adapt,” and the applause almost sounds fake, canned. Then they wake everyone up by going to the opposite end of the spectrum with the audio clutter of “Comet,” but the first half of the set just doesn’t exhibit very much energy. The terse, nervy, out-of-tune, tension is still there, sort of, and “Please Take” is not bad, although, strangely, it sounds a little like mid-period Damned; and “Kidney Bingos,” which is a truly great song, is respectable here, but it seems like they hadn’t played it in a while, even though they’ve undoubtedly played it a thousand times.

Their “robot rock,” as some people call it, is still mostly intact on “Map Ref. 41N 93W,” where they do get a little more lively, and on “Two People In A Room” they sound like they’ve finally arrived for this show. They close the set with a fleshed-out, nearly unrecognizable version of “Pink Flag” that squawks and squeals and lasts about 12 minutes. By this point the audience is fully engaged, but Colin, Graham and Robert just sound bored. Give them credit for hanging in. A B-12 shot, or two, next go round wouldn’t hurt.