The Hair, The TV, The Baby, and The Band – Imperial Teen 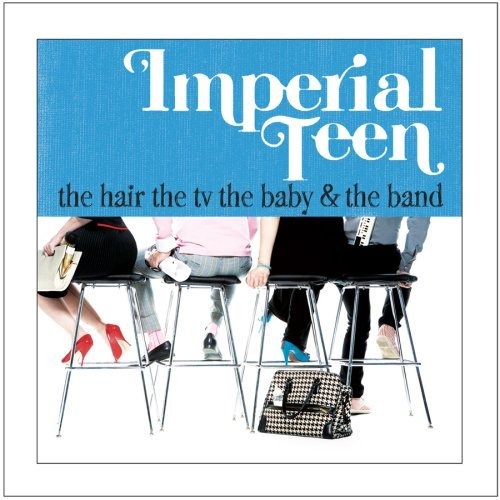 All day long, I’ve been humming the same bar of music. My friends' patience is sorely tried by this repetition, or perhaps more accurately, by my singing. My inability to stay in key is just one of the many reasons why I usually refrain from any attempts at vocal performances, but it would seem that my defenses have been broken down. For the past few days, I've been listening to The Hair, The TV, The Baby and The Band. It has proved to be infectious. The melody burrowed its way into my consciousness, gnawing at me until my usual public singing stoicism gave way to random bursts of ill-advised exhibition. And for that, I have Imperial Teen to blame. But this isn’t about me; this is about the band that’s ruining my reputation.

Imperial Teen achieved brief success in the late 90s with their debut album Seasick. Their songs were featured on alternative radios and to the soundtrack of Jawbreaker. Then they disappeared. The Hair, The TV, The Baby and The Band is Imperial Teen’s first release in five years. Undeniably fun, the album seems to be daring people to tap their toes and sing along, even the sort of people who might usually consider themselves too reserved for this sort of frivolity. From the first moment lead singer Roddy Bottum (UPDATE: who shares vocal duties with lead singer Will Schwartz) counts off the jaunty opening track “Everything” to the fading of the last note of the obligatory closing ballad, Imperial Teen takes us through 40 minutes of relentlessly energetic melodies and the perfected art of the one-line chorus – and it is indeed an art form, however easily it is dismissed by a good deal of critics.

Although their verses are characterized by driven melodies, it is the choruses that are simple and easily recalled; these cheery hooks firmly dig in and stay with you whether you want them or not. Somehow, unlike most catchy pop choruses, these manage to stop short of becoming irritatingly tiresome.

Imperial Teen avoids banality by sensibly switching off the piano and the guitar as lead instruments. The songs on the album remain firmly within the realm of pop/rock, but it’s a large and wide realm: the rollicking, energetic “One Two”; the piano-driven, calmly detached “Room With a View”; the soft and beguiling “Fallen Idol”; the electrifying and slightly quirky “Sweet Potato”. Nearly every track warrants a mention and an attempt at capturing its feel with one or two adjectives, but that would be impractical. The subtle differences on individual tracks may invite comparisons to a range of other independent bands (Belle and Sebastian and The Brunettes come to mind), but it hardly seems fair to compare them to their own contemporaries, and in consideration of the overall album instead of individual tracks, perhaps not very accurate.

Instead, it would be more prudent to evaluate Imperial Teen on their own. However, be warned: should you feel the urge to start belting out the choruses, it’ll be less embarrassing to do it away from large groups of people.

PrevPreviousHissing Fauna, Are You the Destroyer? – Of Montreal, Rd. 2
NextDream Logik Part One – Edward Ka-SpelNext