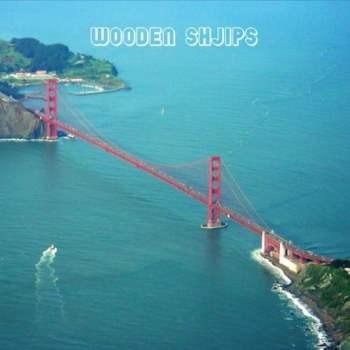 Acid. Greasers. Ghost towns. All of these things come to mind as you listen through the whirling, fuzzy folds of Wooden Shjips’ latest release, West.

West draws out the space cowboy vibe hidden in Wooden Shjps’ psychedelic sound. Leaning heavily on visions of the American West for inspiration, their latest release could be a soundtrack to a modern-day acid western.
Built on a thick wall of feedback, Wooden Shjips’ heavy chords hit hard at first, but soon the repetitive fuzz subtly sinks into the background, lulling listeners into a haunted hypnosis. Through the dense sound, eerie guitar wails thread in and out while singer Ripley Johnson’s echoing vocals, distant and distorted, lead you down the rabbit hole. Chasing Johnson’s lyrics is a never-ending journey, clarity always just a moment away. Like following someone down a darkened hallway, your focus is clear though the destination isn’t, and somehow Johnson always manages to stay ten paces ahead.
It’s not all dark corridors and drug trips for West. Even within the layers of noise, there’s constant variety. “Looking Out,” the closest thing to a dance number on West, takes the album out of the acid scene in Easy Rider and into party mode, transforming Johnson into a 50s-era bad boy, crooning out past a lit cigarette and leather jacket while tambourines clash behind him. “Home” features an amazing organ sound that turns into ghoulish howls, like the ghosts of girl groups gone by. Screaming guitar solos tear through every number, creating songs so full of sound, they could tip over.
If the distorted sludge of The Stooges met with the organ-powered repetition of ? and the Mysterians’ “96 Tears” for a desert acid trip, West would have been born of this unholy union. Instead, West owes its origins to the San Francisco psych-rockers who realized their vision of a musical journey driven not by lyrics, but by the power of fuzz.
West echoes with the otherworldly desolation of its namesake, filled with longing and desert dreaming. The West symbolizes possibility, a hope for starting over and the last experience of an open horizon. West realizes all of its possibilities and re-opens the final frontier from ear to ear.
PrevPreviousMessage Music: Digital Productions 1986-1994 – Augustus Pablo
NextGlowing Mouth – MilagresNext