You Are Always On Our Minds – The Hand To Man Band 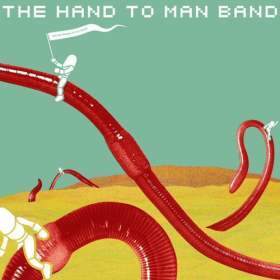 No one in The Hand to Man Band are known particularly for their subdued energy. If anything, each member of the 2010-founded quartet is known for the intensity of his jags: we have Minutemen bass aggressor Mike Watt; we have convulsive Deerhoof guitarist John Dieterich; we have wonked-out avant- pianist Thollem McDonas; and we have Silver Jews/Jim O’Rourke resident skin- basher Tim Barnes. Considering the lack of agenda (or really the lack of planning whatsoever) the band had when coalescing, the tension and subtlety across You Are Always on our Mind is, at its most restrained, enchanting and, at its most expansive, intimidating. The consistent force of musical collision felt across this 17-track, 41-minute debut LP is both calming and unsettling, speaking to the power of the individuals and their collective abilities in musical conversation. That latter assessment might sound obvious, or at least applicable to any band. But in the case of such a disparate underground “supergroup” as The Hand to Man Band, what’s gone unsaid is as impressive as what has.

For a group of musicians known quite well for filling space and time to the brim, there’s a certain expansive breathe and lack of density to this record, granting time enough to weigh the dirtied free-jazz pop with less effort than something like Albert Ayler, Rangda, or even Watt’s more straight-forward (and notably cheesier) improv project Banyan. It seems so often the goal of expressive improv music is to totally blow out all the stops and condense every moment in the weight of a sonic subterfuge. When The Hand to Man Band came together, at an invitation to McDonas from Nicholas Taplin (the album’s engineer and Post- Consumer Records label owner) there was a total lack of an initiative, besides engaging one another in musical immediacy. Granted the amount of freedom offered in such a proposition, there’s nothing overwhelming or distracting across this entire release, even when it comes to skronked electronics, distorted vocal lines, and hovering sub-bass.

With each musician given room to breath, You Are Always on Our Minds maintains a dark urgency by the sustain of its tone colors. Watt’s mantic riffing is often the unifier and groundwork here, in this arty new idiom evoking equally Om and The Jesus Lizard. Dietrich’s guitar sounds as purposefully dissonant as ever. But here, rather than the urgent rhythmic sprees of Deerhoof, he’s presented a much nastier paradigm by letting his odd chord pairings stretch out. McDonas’s consistency here is similar to Watt’s, if not brighter, hypnotically rehashing broad piano runs and single note strikes, sounding sometimes as terrifying as they do gleeful. Even in the case of Barnes, a frenetic percussive experimenter, there’s a certain force to his playing generated by the consistency and subtlety of his lines, be it in the stomp of “They Pretty Right” or the spiraling metallic-to-wooden swag of “First Shallows.” This is not to mention the vocals scattered throughout the release, casting these odd tunes in the same light as something Skeletons might jam on, but without the need to crystalize a form out of an improv romp.

This consistency or nonexistence is cast against a few moments of absolutist sound clouds, but I’m reticent to call any single moment here a “freakout.” Even the nosiest portions of the album, like the latter half of “Occasional Cracker,” sound held at bay. The collective result is a kind of dream-language of sounds that's less disorienting and more subconsciously guiding. Pieces barely start and barely stop, almost an in media res collection of tone-poems. The songs tend to be stringently modal, really demanding from their composition a way to be performed with little planning. Sure, there are unifying moments—the snake-eats- tail loops of Alva Noto/Ryuichi Sakamoto-styled heavy groove “Before Our Eyes Arrived,” the eccentric baroque harmonies on “Semina System,” the last few hits of closer “We've Got A Long Ways To Go We're Almost There.” But for the most part this is a record that shows its unity by allowing division among its parts. Whether in a vocal manifesto in the plaintive and still unsettling “Voice Thrower,” or the Trevor Dunn-recalling opener “Forces Conspiring,” or Top of the Hill-styled Tom Waits on “We Learned the Unreasoning” or a Milford Graves nod with “Thinks This,” the feeling is eventually given that this band can really be whatever you want it to be.