Premiere: Childbirth, “How Do Girls Even Do It?” 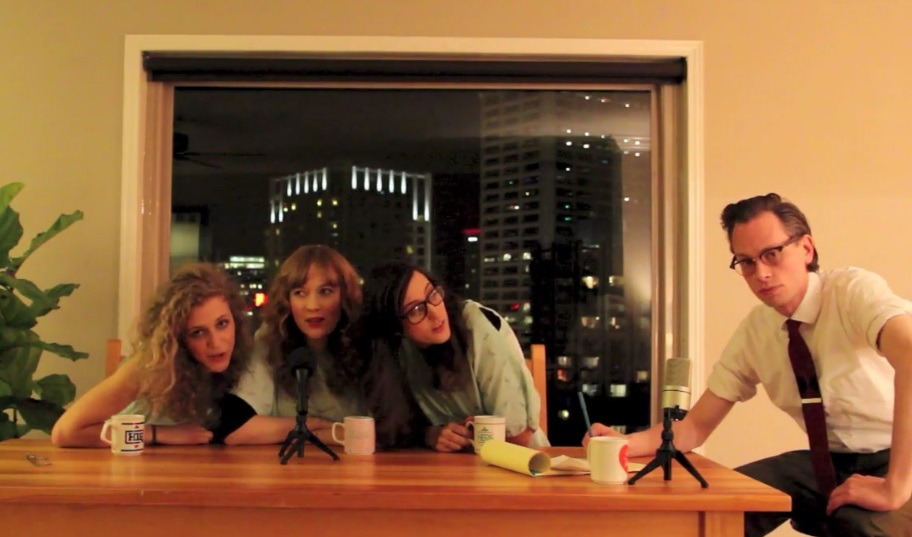 Seattle is on top, and there ain't no stopping the movement. The Northwest has gave us great gifts, like K Records, Hardly Art, Help Yourself Records, BADH, Arrington De Dionyso, Wimps, Dude York, Hausu, Naomi Punk, Ubu Roi, Posse, Tacocat, Chastity Belt, and the super-group-de-force, Childbirth. But there is nothing patriarchal about this oligarchal situationist trio, that counts Julia Shapiro from Chastity Belt, Bree McKenna from Tacocat, and Stacy Peck from Pony Time as a band that burns down the proverbial and pathetic frat houses on their album, It's a Girl! from Help Yourself.

In the debut of "How Do Girls Do It?", Bree, Julia, and Stacy are put on the cable news panel hot seat and interviewed by a Larry King styling Luke Beetham. The awkward and inappropriate series of questioning is moved from the drunken bro banter of house parties to the sensationalist 24 hour television cycles that gives ignorance its own platform. The verses of badgering, "how do you do it?" questions that pertain to gender roles, personal sexual details, positions, and more are all met with the resounding responses of, "I'll tell you later", all over beer, wine, and gummy worms in mugs. Stacy Peck's direction depicts Childbirth having fun while ripping the phallocentric veil off the alternative-anything-shaming kings of the basic cable talk show circuits.

So fresh off the music video's panel, Bree, Julia, and Stacy joined us for Impose's following round table interview.

Tell us about how the overly-inquisitive and amazing song, "How Do Girls Even Do It?" became realized as a TV panel situation.

Stacy: At first I wanted the video to be like a press conference but then I remembered what a great "actor" my Pony Time bandmate Luke Beetham is and decided to have him play a Larry King type cable news sleaze.

Julia: The whole thing was Stacy's vision. I was getting drunk on a delicious combo of white wine and beer, so I barely knew what was happening. But it's true, Luke really knows how to ask some hard hitting questions.

Bree: Yah, luckily for us, Stacy also makes sweet music videos AND shreds on drums. She usually has a really specific visual idea she translates for every song. Except it's kind of hard for her to film her own band, so luckily we recruited our buddy Shaine to help with filming this one. Hi, Shaine!

I already love how the song explodes the polemics of gender identity clueless-ness and the video component takes the piss out of trite television personalities, like Piers Morgan. What is up with the pervasiveness of ignorance of say for example talking heads on so-called news shows who mistake serious conversation for the more sensationalist and sophomoric?

Julia: I'm with Stacy. I get all my news from Pretty Little Liars. I'd say it's about as informative as anything else on TV.

Bree: I am very embarrassed to admit that I am far behind Julia and Stacy on Pretty LIttle Liars. I keep saying that I'll catch up.

What is up with the cable news cycles and loving these frumpy, and grumpy, so-called studiers of 'western civ' history professors that reign on these awful networks? Is everyone chasing the ghost of Walter Kronkite or something?

Stacy: In regards to Pretty Little Liars, I am pretty bummed that we still don't know who A is. It's been four seasons. Come on. I will say that this season is a lot better than last season but they are getting very close to losing me.

Stacy: The 'I'll tell you later' line was Bree's idea. It's kind of amazing how often people actually ask this. It's the perfect response. Completely dismissive.

Bree: I have been hearing queer ladies get the, 'how do you guys even like, do it?' question for years, usually in a really loud/rude/insincere way in front of large groups of people. And most often by dudes who are very threatened or frightened by something they don't understand or feel included in, so 'I'll tell you later' became something funny to have as a standard response to that.

We have been pretty enthused by your album It's a Girl! and we got to know what else Childbirth is recording or working on these days.

Stacy: We have been writing new songs and hopefully will go on at least a West Coast tour at some point this year. Childbirth never run out of song ideas.

Julia: We have some unrecorded songs, that we'll probably record at some point: "I'm More Fertile Than You," "Will You Let The Dogs In?" and our Best Coast inspired song, "Hangin' Out, Doing Whatever (Breast Coast)." We also have an endless list of song ideas: "I Did Coke At Your Baby Shower," "Sucks About Your Penis," "Ughhh Are You Fucking Kidding Me?" to name a few.

Bree: We have a bunch of new songs in the works! We are working on planning a tour sometime this summer. Scheduling is a little tricky because all three of us are super active in our other bands right now.

Current state of the Seattle and Northwest scenes?

Stacy: The Seattle music scene is really cool right now. Everyone is really supportive and encouraging of each other. People barely ever mind when we want to borrow gear from them constantly.

Julia: Yeah, it's true. Seattle is a very cool city to play music in.

Bree: I feel surrounded by a lot of creative, awesome women that all make super cool music in the city right now. The Seattle music scene is kind of the best right now.

Childbirth's album It's a Girl! is available now from Help Yourself Records.

PrevPreviousThe Pains of Being Pure At Heart, “Simple and Sure”
NextSoftSpot, “Black Room Blues”Next