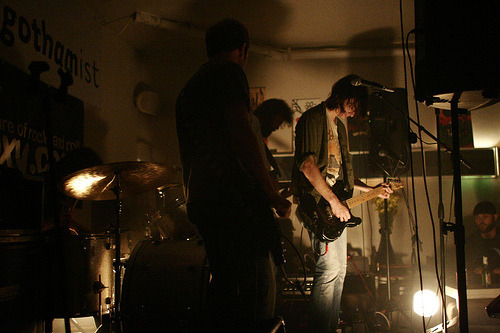 Gothamist, you make us sleepy. It's not the fog machine or the intensity of the acts you've chosen. You've got us all wrong. We just can't keep up. We admit it. We were the eager little bunnies that got kicked in the balls by the tortoise as it loped past us somewhere around our fifth pre-dusk beer, and if that metaphor loses you, here are our two picks from your endless showcase.

Atlanta’s Dead Confederates brought something no one else has so far brought to the little Gothamist stage at White Rabbit: a fog machine. While it was kind of odd to step into something like a Guns ‘n Roses video in the middle of the afternoon (with sunlight still kinda filtering in), the effect was still, well, atmospheric.

There was even a dude whose sole occupation was to man the fog light, with a little fader switch. Like a lighthouse keeper. Caution: Rock ahead.

The set was a moody, high-energy affair, full of organs and crashing drums, as the Confederate lead us on a dark, loud escapade as dangerous as it was enjoyable.

Dressed to the nines in black ties and pants and shiny shoes, Britain’s iLiKETRAiNS came on like funeral directors, playing with fiery melancholy. In the background, old videos projected on the wall made counterpoint, or at least reminded us what the songs were about. The projectionist doubled on flugelhorn.

The lead singer announced beforehand, “This song is for all the dead sailors in the room,” or, “this song is about chess.” And you know what? The song was really about chess – “Rook House for Bobby.”

“Why the black arm bands?” someone in the audience asks. “Oh. We’re in mourning. Mourning for all the people we’ve killed in our songs.”

After a five-song set the group ended with a crash and stormed off the stage in a punk rock fashion, leaving the sequencer still humming. Maybe they expected someone else to pack up their gear then got to the curb, realized they weren't Interpol, and turned around and did it themselves.