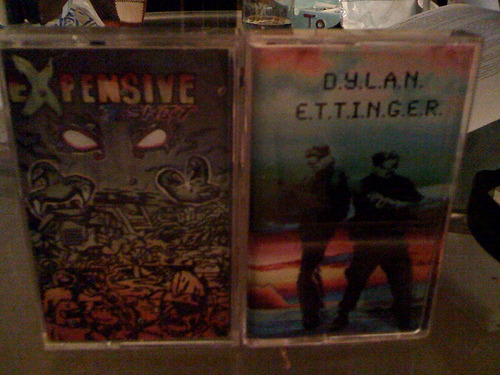 Not Not Fun needs no introduction to most people who are listeners of modern psychedelic music. Their consistent stable of west-coast droners and hypnagogic poppers are loved by many, hated on by some (Jah only knows why), but well-known by most of us. The cool thing about NNF as a label, in my opinion, is their willingness to take on unheard of projects that they love and give them tape releases, further exposing them to more listeners than before. Just in the last two years I've been exposed to NASA, Dream Colour, Rangers and High Wolf. Their latest batch of releases showcases two new(er) acts and hits some proverbial gold once again.

First up, Expensive Shit's Powwow With Chopper. I can find little to nothing on this Texas band whose blend of heavy noise punk jams may have seen the first light of day on this release. The first half of the tape reminds me a lot of the noisier moments of Brooklyn greats, Drunkdriver and fellow Texans, The Homopolice, though not nearly as hardcore and more stretched out. The damaged drum sounds and blown out amplifier orgy pushes right through the first side, with some jump-cuts and slow fade ins & outs. The B side begins with a simple repition, making you feel like you're being slowly lifted towards something, though it turns out you're actually getting slammed on the ground. The heavy, repetitive riffing and downward spiral of drum-pummeling is reminiscent of some Billy Bao or even the harder moments of Social Junk. They can create pretty awesome atmospheres of immense gravity, though just don't expect it to come to catharsis. You're not getting out.

Next we move on to Dylan Ettinger, who has put out a few releases over the last couple of years on smaller labels, building a following in his native Indiana. He sees two releases this round with NNF, a 7″ with backing band “The Heat” and this cassingle, Bringin' The Heat. Aptly titled, the cassette is often described as psychedelic 80s chase scene music.

Don't be a presumptive asshole. It's hard to describe. This isn't pop refracted through a mirror in your memory. It's straight up 80s, redone within a modern sensibility, like watchng a hard-boiled cop' realization montage or Arnold Schwazenneger gearing up for the blowout scene of Commando. It's lo-fidelity synth and simple drum work is hard to take seriously, but it's fun, and retains a bit of that peyote tinge to compliment the big screen sonics. I'm glad I don't have a car or I'd probably be driving around cranking this, driving wrecklessly like Snake Plissken on acid.

These are two new releases that couldn't be further apart in sound, but reveal NNF's great range of acts. Remember, it's usually a good idea to give everything at least one chance.

Get the NNF goods here.