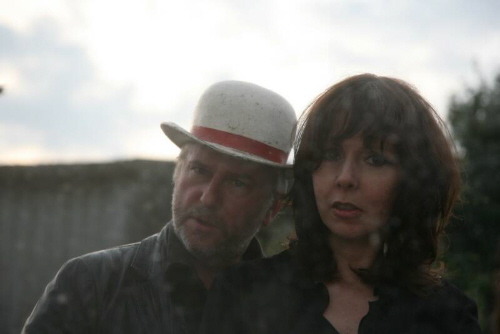 Beginning late August, Wreckless Eric and wife Amy Rigby will tour the U.S. in promotion of their new album on Stiff Records.

Wreckless Eric is done traveling the whole wide world to find his girl and this time she's traveling with him.

Eric Goulden first met Amy Rigby, an equally prolific songwriter, while she was touring Britain. One night she covered Eric's smash single, only to have him come on stage and join her. Dare I say biopic in the making? She's Not In Tahiti, She's From Pittsburgh: The Wreckless Eric & Amy Rigby Story.

The collaborative record will end a 28 year beef between Mr. Wreckless and Stiff Records.

I got tired of people asking if I was bitter about how things went. It's a long time ago now — in the words of an old Stiff slogan: He's Not The Same, We're Not The Same.

A married rock star who squashes a grudge? I think it's time for a name change for Eric Goulden… perhaps “Well-Adjusted” Eric?

Luckily the music has not changed much. “Here Comes My Ship” retains that signature Stiff sound.

Wreckless Eric & Amy Rigby will be out “late summer” on Stiff Records.