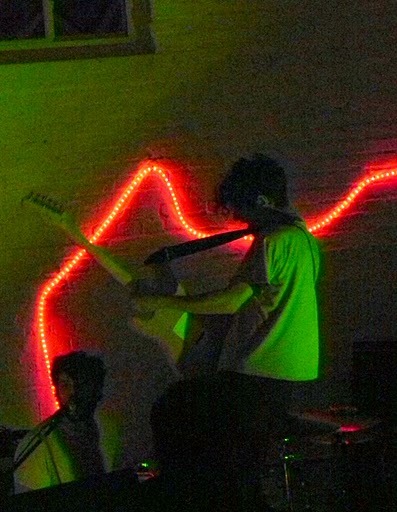 Oh Baltimore, you charming city populated by abandoned
warehouses, a weirdly large amount of American Apparel stores (no wait that’s
D.C.), and some of the most lush and engaging music emerging onto the scene. We
down in D.C. were privy to our northern sister's vibe this Wednesday when Subterranean A (who pull in some of the rawest
talent up and down the east coast) hosted a night of Baltimore pride with noise
art rockers Weekends,
psychedelic Secret Mountains, and Jana Hunter's Lower Dens.

The evening began with a bang as the youthful twosome
Weekends took the floor with one trashed, thrashing guitar and one pounding drum kit. That two
dudes can create such a large, noisy (but still accessible) sound with their minimalist
set-up proves that experimental noise rock is alive and well. Not only did they
put forth the raw energy heard on their debut LP Strange Cultures, they also gave a killer performance. From
standing on top of amps to sliding backwards up the stairs and well into the
audience, Weekends blew our feeble minds (that’s the only excuse I can
give to the guy who turned to explain that “they put the un in fun”).

After the rawness of Weekends was Secret Mountains' lulling psychedelic folk, proving a perfect bridge to Lower Dens. Although diminutive in size, Singer Kelly
Laughlin produces a deep, encompassing, and
powerful voice heard especially well on tracks like “Rejoice” from their last
EP Rejoice. The rich instrumentals
produced by the six-member band at times overpowered Laughlin’s vocals, but by
the end of the set the vocals and instrumentals melded, creating the richness
heard on their albums.

Having lost my space on the upper level, I found myself on
the crowded floor for Lower Dens’ set, but it turned out to be a blessing in
disguise, given my close proximity to Jana Hunter and her haunting presence.
Wearing a hoodie for most of the show, Hunter also validated that intensity
comes in all sizes, as I could barely see her due to the tall guy in front of
me (really?). During mid set the evocative mix of Hunter’s vocals with the low dreamy
instrumentals created a warmth and sense of community that evaded the floor as all
slowly moved along to the band’s beat (this could of also been from my face being
pushed against a dude’s flannel shirt). Playing a sublimely long set, Lower
Dens dove more and more into their ambient, noise-driven, folk-rock based style.

Baltimore’s visit to Subterranean A was definitely one of
those perfect concert nights, where each band put in varied, if consistently excellent sets. Truly all eyes should be on Baltimore (if
they aren’t already).