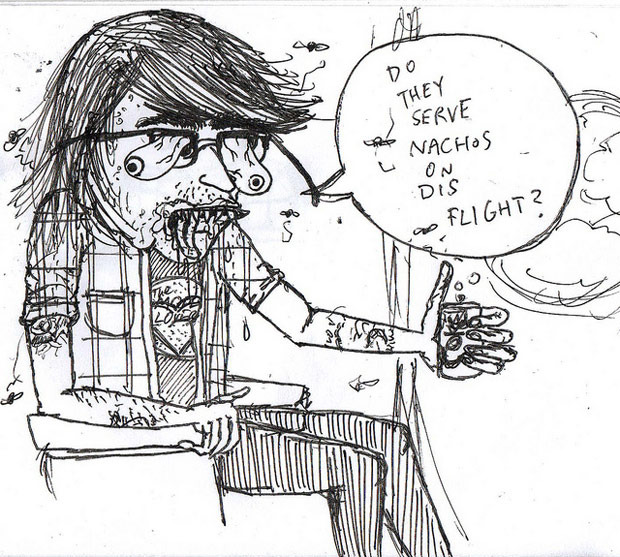 Perry Shall makes artwork for the people “ALL THE DAMN TIME.” Mostly, he roadies, sells merch, tour-manages and does artwork for JEFF The Brotherhood, and occasionally, other bands. He also books shows in Philadelphia, plays in two active bands (Dry Feet and HOUND), and works for a company selling vintage clothing on eBay. Sometimes he works at a record store called “Long In The Tooth” while he lives with an undying love for Elvis Costello and Beastie Boys, and Nachos. Perry is an infamous T-shirt hoarder and collects records and toys as well.

How’s being on the road with the Orralls?

I'm kind of constantly on the road with them. How IS it? Great! Being on the road with two of your favorite people is amazing! Getting paid to hang out, work and watch your best buds play shows every night is one of the most satisfying things I could be doing right now.

How'd you meet them?

I met JEFF about three years ago right before Heavy Days came out. I was on tour with Screaming Females and both bands were friends and were playing together with an early formation of PUJOL in St. Louis. We hung out that night, it was cool and both bands ended up on tour together a few months later. JEFF eventually asked if I wanted to do a tour with them and the rest is history. Now I'm their main dude.

Photo by Perry Shall

Justify why you broke Jake's hand when he was stealing your nachos.

HAHA I almost wish that were true. I could never hurt him physically. Perhaps only annoy him to death, which I probably do pretty easily
already. The truth is that we started playing a lot of basketball to keep in shape on this tour since being trapped in a bus for house is an easy way to turn into a complete mess. We were playing at Beth from Best Coast's Uncle's house, and Jake and Mark (Best Coast's tour manager) collided into each other head on. Jake flew to the ground and scraped up his leg and fell pretty hard on his face and hands and Mark messed up his leg pretty bad as well. Jake woke up the next morning in a lot of pain so we went to get his hands X-Rayed and the doctor pretty much said, they probably weren't broken but he couldn't really play guitar for a bit.

CRUCIAL HEADACHE (in all caps because it seems cooler than it actually is) is pretty much me a few years ago trying to come up with a cool
artist name of some sorts. Some of my favorite artists had cool artist names, Ed “BIG DADDY” Roth, PUSHEAD, COOP and my friend Richard aka HORSEBITES, to name a few. I just wanted to come up with something I really liked and could see myself using for a long time. For some reason I came up with CRUCIAL HEADACHE. I don't think it's an actual phrase or anything because Crucial means something you need or must have and nobody NEEDS or must have a headache. You just get them and they fucking suck but I think looking at my drawings and artwork kind of gives off that vibe. Like, if you stare at them long enough you can get one maybe. Or, the thought that I had a headache and it was driving me so crazy that I ended up making some weirdo fucked up artwork from it. Who knows? Anyway, I had one art show (ever) a few years ago and called it that and it kind of stuck. Now I've made two zines with the same name and figure I might as well use it for a while. Perry is cool but I like to separate my alter egos a little bit.

Who's art do you like better— yours or Marissa's?

These questions are great haha. That's a weird one because it's rude to say you like your own artwork I think. Regardless, Marissa is one of my favorite people/artists/friends/musicians EVER. She is, at the same time, one of the most talented/influential people I've ever met. I love her to death and there is no doubt in my mind that I like her art better than mine. I like pretty much everything she does better than almost anything most people do.

OH! I love that piece. I forgot I made that and never scanned it for a few months and recently pulled it out for the world to see. Most of the time I name artwork after the first thing that comes to mind. Most of the time the names are from other things. John Waters is a hero of mine and everyone in my house had recently been trying to watch every John Waters movie in a row. Aunt Edie has always been one of my favorite characters from any movie and I've always liked the idea of an “Egg Lady”. There's not much of an explanation other than I found a Polish cookbook and pulled some images from that and other random books and MY Egg Lady was born.

Hmmm I guess just live. I've somehow managed to drop out of school, worked construction for 4 years, not have to sit in a shitty cubicle every day and now I just do what I love for people I love. I'm not sure how long that can last but I guess I'll ride it out as long as possible because if you only get one life and you don't have any fucking clue how long it could last, why the hell would you waste any amount of time in it doing what you don't want to do? No matter how much money you're getting paid, you can always find something else to pay that bill that you'd enjoy more.