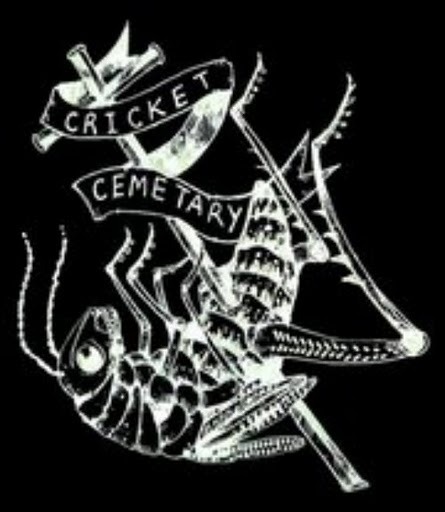 Screaming, steadfast ideals, shaved heads. The
imagery and sound of hardcore has taken a bit of a backseat on indie’s mainstream
scene this millennium, but Mogwai’s
recent album title Hardcore Will Never Die, But You Will seems to adequately describe the resilient Mid Atlantic hardcore scene. It is especially
alive and well in the District thanks to the recently created Cricket Cemetery label. I talked with Ian Thompson, founder of the vinyl, local, and hardcore only
label (exclusivity plays a slight theme), about Cricket’s formation,
recording at the legendary Inner Ear
Studio, and the current state of hardcore.

Where did the idea for Cricket Cemetery, a vinyl
only hardcore label, come about? I’m guessing it’s probably an idea you’ve had
for awhile, considering all the work that goes into getting a business off the
ground.

I didn't really have an idea. This label is a
necessity in my life. I've always had things to say and things I wanted to
accomplish, I just found the right format I think. Everyone has idols and until
recently, mine were all musicians. Starting from when I was old enough to know
who Sheila E, Prince, Michael Jackson, Gloria Estefan or Tears for Fears were.
Later in my adolescence, punk, hardcore, and some metal bands became a more
specific part of my life. I've only ever cared about music. I've always been
fascinated by all the different aspects of it, like location, members,
influences, gear, records, etc. Being a fan or even a musician isn't really
enough for me anymore. I want to put my hands in every aspect of the process.
Not to be a control freak, but rather to just get shit done. Put out quality
records with quality local music that people need to know about. There's an
endless fountain of talent in this city and surrounding areas. People need to
hear what it sounds like.

The last few years, a lot more vinyl-only and/or
vinyl-specific labels have popped up, including some in the D.C. area (Yeah Gates, Windian, Sockets). Do you find that this niche
community provides a good support system for everyone, despite all dealing with
somewhat different sounds?

I like that those labels exist and that other people are stoked on releasing
music (specifically vinyl). Windian released a Two Tears 7-inch, so that's a
number one in my book. As well as a Shirks 7-inch. Sharp.

The 7-inch split between L&T&W and State Violence has a pressing of 300 copies. Are there hopes to press more if the public
calls for it? Or is the pressing of 300 deliberate in the sense that they will
become a type of rare collectible?

I don't know if I'd press more if the demand was there.
Probably not. I kinda want to stick to my guns on that one. I'm picking (in my
eyes) very special bands to release records for. And I'm going to package each
release accordingly. They should be rare collectibles. Rubies and gems, just
like the music incased for eternity by vinyl.

Where do you press your vinyl?

I always go with United Record Pressing, which is located
in beautiful historic Nashville, Tennessee. Doesn't that sound nice… It is a
process, but the process is the fun part. Just like someone who can't wait to
get their copy of the State Violence-L&T&W 7” in the mail (out this
spring on CC, holler), I'm excited in the exact way to get the test presses
back from URP as I am to get home and try out a new ink for a record cover
screening or insert. Work is fun.

You recorded both 7-inches at Arlington, VA’s Inner Ear Studios, which holds a
ridiculous amount of legendary clientele on both the local and national level
(Henry Rollins, Andrew Bird). What was it like being part of that history? How
did Inner Ear and Nick Anderson get involved in the process?

It was a pretty big deal for me. I've been a
part of a fair share of recordings. Inner Ear is one of the coolest, if not
the best. Tied with Magpie
and or Godcity. We banged
out the recordings in a couple of hours. Nick is a good friend of mine. We've
played music together in the past. Regardless, Nick was the perfect man for the
job. It was nice to be able to enjoy the process with a friend and all around
nice guy!

Can you tell me some more about L&T&W? They boast quite the
roster, combining three pretty well known VA/DC hardcore/post-punk bands,
including A Day in Black and
White. How did they come on board with Cricket Cemetery?

L&T&W is my new band. Four-piece sonic
skull fuckery from DC. I dunno what genre it is. It's real loud though. It is
comprised of John (guitar, vocals), Ryan (bass-vocals), myself (drums, vocals),
and BS (vocals). L&T&W is my band. Cricket Cemetery is my label. The
match is like peanut butter and chocolate. Doing it, and with a considerable
amount of post cuddle.

Speaking of L&T&W how did their recent release show at
Arlington’s Galaxy Hut go?

It was rad. We played way to loud as always and
State Violence ripped. HARD. Big thanks again to everyone who came out for that
show, lots of beautiful friendly faces in the crowd.

In the last few years the mainstream indie scene
has been dominated by a lot of pop, psychedelic, and pop rock. What is the
current vibe on the hardcore scene? Do you see it coming more into the
forefront? Does the scene necessarily desire a move into the larger sphere?

I love all music, a lot. This very second I'm listening
to the new Soulful.
Earlier I was listening to Skitsystem
and not yet, wait right…now, a little Harold
Budd, ahh that's nice. But if I was speaking on behalf of hardcore as a
genre, I think hardcore would hold a shiv to my neck and force me to answer
with a defiant “FUCK you”. Next question.

How do you find D.C.’s scene to be at the
moment? Local spaces like Hole in the Sky and Wasted Dream often
host hardcore bands. Do you find there to be a sense of community
throughout the area?

For sure. Wasted Dream and Hole are awesome
spaces held up by responsible people. If I can get my shit together in time I'm
going to go to check out a show at Wasted tonight actually. D.C.'s scene… no
idea. I've never fit into anything. Not to sound like a crybaby but I don't
really care. I'm too busy worrying about my own shit and getting through the
day. But I do support any and all DC-MD-VA art and anything that takes guts,
time, and work to do.

What do you see for Cricket Cemetery in the next
few years? Are there any plans to sign more bands? Do you see the future as focusing
more on local bands or do you have hopes to also sign national acts?

Hahah.. I have something in the works that makes
me giddy like a schoolgirl. It would technically break my local talent only
rule, but it would be way too much fun. But I really don't want to say anything
else. Especially if it doesn't happen I don't want to look like an idiot. In
general I'm staying with only D.C. (and surrounding areas) bands. The second I
get confirmation I will be stirring the honey pot like some shit.