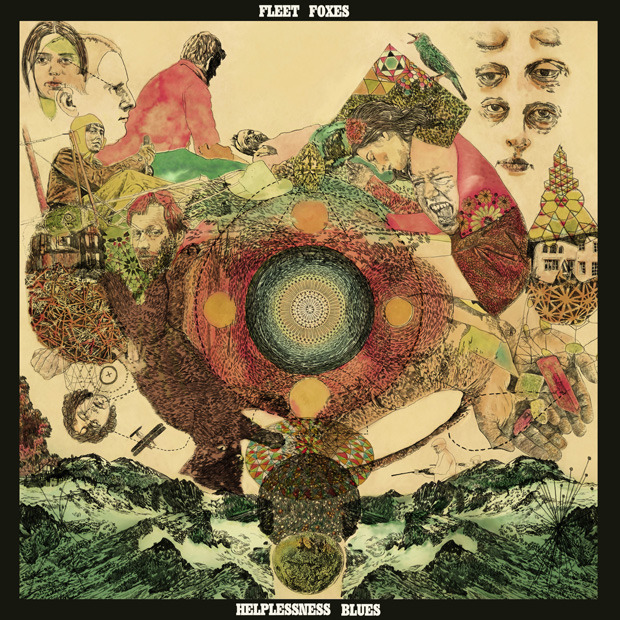 A Seattle based illustrator, Toby Liebowitz started designing the Fleet Foxes' Helplessness Blues record cover
without listening to the songs. “I
hadn’t heard the entire thing from beginning to end in its proper order until
recently but everything has an amazing depth to it—the instrumentation and
vocals are complex…the lyrics especially are beautiful and bring such vivid
imagery to mind,” she says. She worked with front man Robin Pecknold on the final piece.

Liebowitz calls the concept of the cover a “collective mind-map—” an account of “non-linear and cyclical web time through the creation of
relationships and branching memories, experiences, dreams, and places.”

She proceeded
with the project by first conducting interviews with 11 of her friends and
family— “a quick and silly exercise on spontaneity”- where she used four
prompts: sunrise, sunset, moonrise, and moonset, to which they responded
with the first thing that came to mind.

“I used their
responses as stepping-stones to create a bigger picture,” she says, “The final
drawing is a compilation of all the individual maps, with a few changes here
and there to tell a more cohesive story.”

“Collective
mind-map” seems as fitting a description for most of her other works, too, where images mold with or overlap one another without disarray.

The intricacy of her drawings are perhaps a result of her love for pencils: “Oh golly, I
am so into pencils, its totally silly! My favorite is the Draftomatic .03 lead HB. I probably shouldn’t be using such a tiny point lead because
it totally fosters my OCD with microscopic detail.”

Falling short
of the right terms to describe her style, I asked the artist herself—“something
like abstract expressionism meets photo-realism?”

You were in
India for 6 months. Tell us something about the trip.

I wanted to go
to India because my mom spent a lot of time there when she was my age and wrote
a book about traveling to India and Nepal overland from Greece. Growing up,
there were a lot of stories so I always felt very drawn to it.

Everything
fell into place last year when I went on a study abroad trip to Auroville, an
intentional community in Tamil Nadu. I worked on a farm for three months and
studied the concept of utopian societies through the works of many great science
fiction novels. After my time there was up I decided to take the next quarter
off and travel. I spent three months in the spring of 2010 traveling through
northern India and Nepal. It was such a beautiful and inspiring experience.
Meeting strange people who are actively living their lives in different and
magical ways, you realize you can really do anything!

“In Bruno is where I long to be” is the title of your website. I'm curious, where is this Bruno?

Bruno was a
place that I made up when I was little. The place where my imaginary friend
left me to go to! The place where all the things I never did end up. Where all the stories my parents ever told me end up too. Everything is there
together hanging out.

Illustrators weren't given the value they deserved in earlier times but these
days you see a whole lot of them. What do you think makes illustrations so
popular amongst all these other forms of art?

I think
illustration is getting a lot of attention because it is so accessible. People are
also drawn to stories and illustration is a welcomed accompaniment- it’s a
bridge between fine art and graphic design. I’ve always been interested in
Illustration – I’ve wanted to write and illustrate books of all kinds since I
was 8. It’s the most expressive medium for me.

“Currently I’m
finishing up school at The University of Washington, and
have just bought a one-way ticket to Vietnam for October 1st – I’m going to be
traveling for at least a year through Asia (mostly India), Eastern Europe, and
Africa working on my thesis for school. I’m also going to be working on a
graphic novel about intentional communities in those areas and the ways in
which they farm, build, live, heal, eat, etc.”

She Studied Illustration at Parsons School of Design in New York City. Visit her portfolio, In Bruno Is Where I Long To Be.