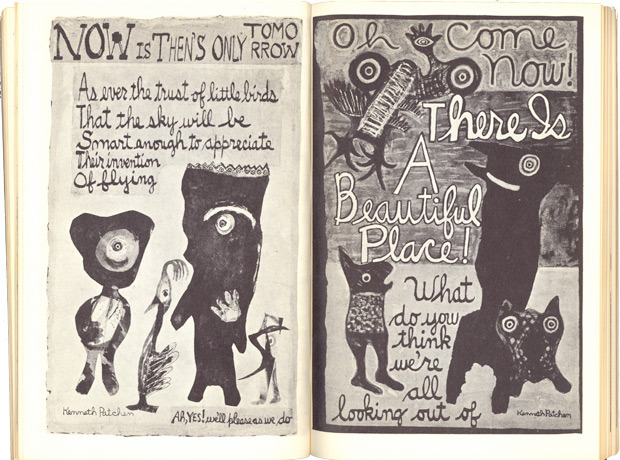 This summer I found two rare Kenneth Patchen gems at a secret bookstore uptown. Both Because It Is and Hallelujah Anyway are picture-poem prints from the 1960s, though only the latter is completely hand-drawn and hand-written. In fact, Hallelujah Anyway was Patchen’s first such collection. He works with watercolor, casein, inks, and other media to create these innocent yet dark and humorous amalgamations. Here are some scans:

“The birds are very careful of this world/ Ha! a lot of good that'll do them!/ (Behind those desks, some mighty dangerous guys are sitting, Baby)

“My program? Let us all weep together”

“& so the little field mouse said:

Allright, but first explain something easy—

That blowing up the world

Shows how far-along smart you've got-

Prove how crazy you are!”

“Love (which Includes poetry) is to science as the free and beautiful catchings of a child are to the vile and unreturning throes of the hangman.”

“What the story tells itself when there's nobody around to hear it.”

“PRETTY SOON COMES THE PUNCHLINE, OLD MR. HE-WHO- OLD MR. HEHA-HA! MADE THE LITTLE LAMB, LITTLE LAMB- ALL SO MEEK & SOVERY VERY MILD LIKE IT WAS HIS OWN LIL' CRADLE-ROCKIN CHILD

+From a news dispatch:

For the third time, a towering, fiery fist -in the now all too familiar mushroom shape- burst with a blinding roar above the desert south of Algeria…

Jubiliant scientists reported that during the so-called 'hot' period immediately following the blast, one of the control animals in the concrete pits below gave birth!

BETTER JOKE THOUGH, IF THAT DOPEY NUT WHO COULDN'T SPELL BETTER THAN TYGER HAD COME UP WITH LAM— LIKE TAKE IT ON THEE

The Animal- A Baby Sheep

“THERE ISN'T MUCH MORE TO TELL

Ever so, ever so clever

On that blinkin pretty bubble

They never made it really clear

“All at once is what eternity is”

“Pleasantly we shall remain/ at least while we're here”

“Elephants and eskimos are the sort of inventions makes me sure that god has a couple three-four kids of His own.”

A pacifist as expressed in his works, and a poet and novelist from Niles, Ohio, Patchen spent his later years writing in bed due to a spinal injury from trying to fix a friend’s car in 1937. Surgeries seemed to help sometimes, but after moving to San Francisco, a throat operation in 1959 left him more immobile. His first, highly political poems from the 1930s in Before The Brave led to his reputation as the “Proletariat Poet”, but his styles kept changing, even alongside writers like Langston Hughes and Kenneth Rexroth, whose forms came to be known as Jazz Poetry.