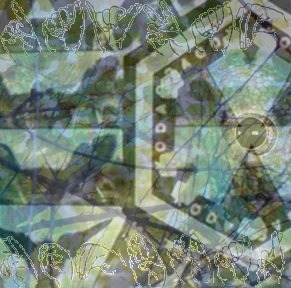 DZ Tapes first appeared on Impose in September with their s/t tape release of Russia’s Wavepool’s Abortion. The DC based distributor is the brainchild of Brett Isaacoff, a man of many hats, which includes being the creator of internationally known music blog Dayvan Zombear. Simply beginning as a way for a forgetful college student to remember some new music, Dayvan Zombear has grown to become a full fledge site that specializes in promoting and streaming the most inventive music on the world wide independent scene. Adding a distribution side this past May with the release of DYVNZMBR Community Compilation, Isaacoff recently sat down to discuss the symbiotic relationship of the Internet with the current music scene, the universality of music and DZ’s Corduroy Day split release of ghostandthesong and Chris Rehm.

DZ Tapes’ distribution has a huge international flair, Wavepool Abortion's Russian motherland was a cheeky farce, but the soon-to-be released ghostandthesong from Germany is legit.

How do these transcontinental deals come about?

Brett Isaacoff: Sure, sure. Gosh it’s all about the Internet these days I can’t lie. I’ve been lucky to have established a blog or a place where other people or bands want to submit their content. Naturally lots of content comes in from that and I have a lot of interest in putting out tapes, so obviously the Internet will allow that to happen from anywhere. It’s pretty awesome being contacted in languages that you don’t necessarily understand but you both are seeking a same goal.

Do you see DZ Tapes expanding from more of a one-man operation?

Do you have any thoughts on branching out into recording since you have a background in sound engineer?

Oh my gosh, would I love to. No doubt. I mean in order to I don’t feel well immersed in any particular scene enough to pinpoint someone I would want to work on a project like that with. That and also I don’t have the hardware. I don’t have an ideal Rig; I have two microphones and a MacBook Pro. Most folks into blogosphere music probably have that too.

How did the blog start and how did it grow to this point where all these international people and groups seek you out?

I don’t even know where to start with this. I guess that tape label spawned out of everything I was doing with this download piracy blog and the interest that was building up from that. I just felt like doing it. I found myself in an extra pool of cash and decided that I guess wanted to give back to musicians. The first release though was done through Kickstarter. The campaign was back in May and it was to raise a whopping 1,200 dollars to produce 300 cassettes. It sounds minimal I know but that 1,200 dollars went towards cassettes not only for the purchasers but for the artists themselves so they could sell it and get a piece of everything without having to do everything. There were some exclusives but mostly any content an artist wanted to submit for that project was cool.

Was Wavepool Abortion on the first release?

No, they contacted me during it though. For the compilation I pretty much had people in mind to contact and I sought people out. I passed the idea along to friends who make music in their spare time.

You have a release coming out on National Corduroy Day 11/11/11. Can you speak a bit on it?

I love corduroy it fits so perfectly. Yeah it is a project with ghostandthesong that you mentioned earlier and Chris Rehm. It is a split cassette. One side is Shimmer and the other Unschärfe. It is basically two different fifteen-minute acts. I’d say you’d probably want to listen to straight through though.

Is that the only release planned at the moment?

Yes, for the moment. I’ve been in talks with a few other artists at the moment but nothing solid is in the works. But definitely the fourth and fifth releases look like they could be coming out in January or February. Things move slow when you are just one dude [laughs] I just envision a world where I have more free cash and free time.

Did you ever think of doing releases as vinyl or a CD-R?

Tapes are more ascetically pleasing in my mind than CD-Rs.

Of course, of course. Everything that goes into the packaging and it is something you can customize to however you want to in terms of design and packaging options. It’s all fun and games. CD-Rs I think are a little tacky but I definitely would love to do vinyl. I haven’t thought about it yet. I think this first project was very ambitious. It was almost two hours worth of content packed on one tiny cassette tape. For smaller projects like singles, I have an artist right now that I might want to put out a cassingle for or whatever. But it would also easily be suited for a 7-inch release too. So it is not necessarily limited to cassettes but it is just where my interest lies right now.

There is a tape revival going on.

Yeah for sure in the past few years or even longer I’m sure people have been recording on tapes but I guess recently a big resurgence of everyone wanting to put out a tape and start a record label, which is exactly what I am doing. [laughs]

Speaking to that DIY spirit, DZ Tapes has a mission statement where you speak to the big business and commercialization of the larger music scene but it seems like now with the encompassing internet music scene, while I don’t disagree with your statement, it is almost two different worlds that aren’t even overlapping anymore. Basically I was just wondering if you could expand more on the feelings behind your mission statement philosophy?

Sure, sure. I don’t know…I guess I’m a little schizophrenic in the fact I like people to be able to get things for free but obviously the artists have to make money. I don’t know what it is, I guess I just have a problem with people settling for what is on the radio or advertisements or whatever is in a commercial. I don’t know ever since the blog started I’ve just been about exploring through blogging things and sharing.

The Internet and DZ Tapes offer a good resource to get their music out there, which leads into your podcast Zomebear Radio. One of the most striking and appreciative things about the podcast is the variety of artists and genres showcased. What is the process of making those playlists? You also feature a lot of new releases before the release date. Are you in personally contact with a lot of the artist featured? Basically what is the creative process of Zombear Radio?

Basically in terms of how it comes together it is mostly a mix of what I’ve stumbled across mixed with submissions that I really enjoy that might not have a full album to promote. Sometimes I am lucky to be privy to undisclosed tracks that I want to share.

So did Zombear Radio start at the same time as the blog?

The blog itself, well the pirate blog started in 2007 and that was just more of a way for me to keep track of whatever I was listening to because I don’t remember things and it is always good to look back and see what your were listening to yadda yadda…Then it grew more into about sharing music, which is very dope.

It is very dope. Hitting on the piracy aspect of the blog calls to mind the recent debate over the Internet law the House is trying to pass regarding the way we share information. Do you have any thoughts regarding that subject?

I was describing your blog to a friend as a tape distribution that focused on international music especially of the electronic variety. And she said “wow punch me in the face, that is so pretentious…”

Which leads me to wonder if you find yourself running into people who impose a high level of airs? It seems in the larger independent music scene there are definitely people who are purely in it for the music but there is also a vibe of one-upping. What are your thoughts on how welcoming or unwelcoming this music community is?

Sure, I guess I’ve been lucky in the sense that the people I chose to associate myself with aren’t pretentious like that and they are very open. I remove myself when people talk about music because I don’t want to be that type of person. Everyone listens to music in a different way and has a different perception of what music is or could be. You really have to understand the person you are talking with in order to feel comfortable.

I think that really highlights how music is a really great example of high and low culture mixed together because music is so universal but people take it in such varying contexts. It is extremely personal while also being very community orientated. Do you find yourself to be more involved in the community side or is it more of a solitary act?

Recently I have been more involved in the community but in general I think music is for everything. It runs parallel with every life force. There is music for anything: sleeping, working, whatever I could go on and on. Music being universally, I definitely agree with that and spoke to it my mission statement. It is universal in the sense that no matter where you are from or your educational background or how much money you have, etc. Music is a language that most people can understand or go along with.

Universality certainly speaks to DZ Tapes' philosophy in terms of artists as you are dealing with who speak a variety of languages, yet you and they both have things in common because of the common end goal.

A lot of people have spoken to the fact that perhaps music criticism has fallen to the wayside in the rise of blog culture. Do you see a point to music criticism? It seems in some ways it works as a device in filtering music for the masses and clouding peoples’ judgment prior, which is something you speak against in your mission statement.

For sure. I don’t know if it is out of laziness or what, but I find music reviews to be a bit boring to read. I love music suggestions and the association game of “if you like this listen to that.” I could play that forever but just reading reviews, unless it is an album I’m really attached to, I won’t bother to seek out a review on it. It is interesting I guess to see what the people who are getting paid to do this sort of thing have to say about albums that mean a lot to me, but for new music I don’t really bother.

So is that why you leave your blog wordless for the most part, because you don’t want to put an opinion on things?

Pretty much, again you could say it’s out of laziness and some people might. People are going to have their own opinions about music. I hate having to even put up genres and having to label something, but that is kind of a necessity.

Genres seem to have really exploded in the last few years from a few basic ones to one song having about twenty different labels.

Oh yeah. Talking about music can be exhausting. You have to a certain vocabulary for it and auditory visual medium for them. You have to be able to sense something about a sound and attach it to a word that.

ghostandthesong/Chris Rehm split will be available for purchase on 11/11/11 off of the DZ Tapes website.