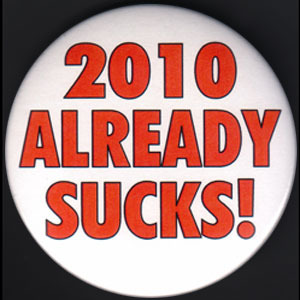 The world still has at least 7 weeks of 2010 left, but Amazon is going to go ahead and release their beast of Top 100 Books of 2010. All good value in the world must come out between February (January… too soon!) and October apparently. While I'm still trying to read books from April, Amazon just goes ahead and pre-empts everything, like when Best Buy starts hanging up Christmas ornaments before Halloween.

The #1 book this year is a book I didn't know existed until I read Amazon's list. Rebecca Skloot I'm sure is a fine author, but I have no idea what she's talking about. I had heard of the rest of these books, just by virtue of me currently reading one, interested in another and lastly because I go to Target more than I really want to.

All of this brings us back to a core critique about Amazon–they are first and foremost a retailer. So it gives me pause when I see literary minded people taking this list in particular seriously. Sure, Amazon made a big deal about it, tweeting one of their Top 50 books every 5 minutes or so…but their criteria is unknown. It's a mix (I'm sure) of some critical tastes (look…we sell books, and we know good taste!) and mass appeal (look, we sell books! A lot of them!).

But just so we're not fooled, their prime motive is to sell books. They release this list this early so people will be interested in the books (I'll buy this one…Amazon says it's good!) and then hopefully buy books for discerning readers on their Christmas list (Life by Keith Richards in the Top 50…I'm sure there is some quality writing in there…).

It's a scam or a conversation starter or whatever word you want to use to have people buy more books for Christmas, just as the local drugstore keeps ordering Christmas decorations earlier every year.

It's hard to take the books on this list at their worth knowing that Amazon is judging their worth in a different way. It has the effect of tricking us into thinking the picks are serious, while also sending critics scrambling towards their own list and perhaps skewing the view of all other future lists.

That said, I've made lists and will probably make one at some point in the coming month or two. But come on Amazon, let me at least finish my leftover Halloween Kit Kat bars before making me buy more schlock.