At Sea with Leopold Haas' The Raft 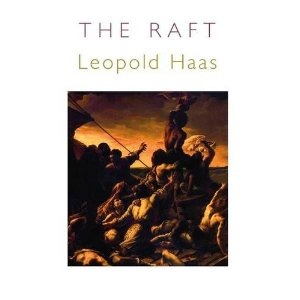 The events that set the framework of Leopold Haas’ The Raft (Reality Street, 2011) are well known to history or, more likely, art history. This is the French frigate Méduse that ran into rocks 60 miles off the coast of Mauritania in 1816. The well-connected climbed into rowboats. The rest drifted on a raft (20' x 60’!) built quickly from the abandoned boat (any boat, it seems, contains many lesser boats), where they starved and drowned and died of thirst.

Gericault’s oil painting Raft of the Medusa, created shortly after news of the event reached France, is a kind of threadwork through Haas’ poem. The painting is never referenced (the story predates the painting, in a way), though a cropped-in detail showing the outstretched survivors at their moment of rescue is used as the book’s cover. Martin Kippenberger would later create a suite of drawings, paintings and prints recasting the raft’s figures in his own likeness. With The Raft, Haas has created something complex enough to touch on whatever lineage it is these artworks have between them. It’s an intricate book-length poem, and lengthy; a musical work about a fledgling society gone to seed in the punishing waves. It moves with a sea-swell logic, powerful, encompassing and often very funny.

That sense of enacting an artwork from the start places the poem’s 12 characters as performers who know that “it’s not a tragedy when things are this close.” The challenges of the circumstance (as severe as they are they never feel serious) are undermined by distracted process and droll bureaucracies. They’re lost at sea and otherwise lost, in language most of all. Lope, the ship’s Doctor, asks What happened to our efforts to fish? No one knows. They’ve simply forgotten. Ern, the ship’s Carpenter, forms a committee he calls The Office of the Lessons Learned (TOLL). The group collects stats, takes polls, charts trends, promises to “investigate the fish,” to “investigate the future possibility of life” and, it seems, draw some conclusions about the contemporary experience of being marooned at sea. (Today you would call this an ‘interdisciplinary project’). A questionnaire turns up the fact that 99% of the raft’s passengers feel that art is “secondary to ‘floating about,’” which seems as good as saying the inverse. We half expect them to dock up at the Venice Biennale for wine and cheese and the Golden Lion as soon as find real rescue.

More than once a rumor circulates that someone plans to create a second raft from the one they’re on, “in homage to painting.” The idea that the situation might be resolved by way of reconfiguration (It’s not the ocean that’s the problem, just the raft), does seem to suggest these are issues of understanding. One hopeful sentence goes:

He’s organizing it so that the sea (hang on) The sea raft that she is will take us to her shore…. it’s genius. The problem (hang on) has something to do with the interpretation of the raft.

After Gericault, it’s not enough to be lost at sea; there are expectations to meet. And so Haas has built a text that locks eyes with its own reflection, as much self-portrait in the style of as the thing itself.

For something that feels like a performance work, the poem has a strange relationship to voice. After 12 days on the ocean the survivors haven’t figured out much about communication. They address one another as questions and rarely get a response. No one is listening really, just swapping their set-pieces. There’s distrust of music and they all seem to agree that this is “no place for tunes.” Norma, one of the two women on the raft and a singer, is widely disliked, and that’s no surprise. Music has the perverting ability to “get into the ears and weevil your reason into sand.” The onset of gangrene is earlier described in similar terms. So is the “unharpoonable menagerie” of microscopic critters looking for ways into the brain.

The poem’s basic structure, though, is in fact one built around music. In an introductory note Haas indicates that the work is attempting, in some way, to translate Arnold Schoenberg’s twelve-tone theory of composition (one of many things the poem sets out to do). Musical notes are touched on equally to create a democratic harmony across the octave. The Raft then aims, in Haas’ words, to permutate “twelve voices or tones over twelve moments, in order to imagine a poetic/prosaic form that is not simply lyrical, epical or dramatic, but tonal.” To this end, there are 12 sections of the book, 12 days at sea, 12 survivors (one is a dog). Each page is divided across twelve columns, which sentences slot into or skip. The snippets of text cross-bolt the vertical alignments, like planks of lashed wood. This is some kind of raft, easy enough.

And reading The Raft, that dissolve is there from the start. You can feel your eyes drift downwards into the white space, which is everywhere within the text. The sea is the sentence we are constantly sinking beneath. This is a poem that is “wetting to sink.”

We learn later that the fragmented structure owes something to the Shirat HaYam, The Song of the Sea, that three-channel song dropped into the Book of Exodus after the Israelites pass between the parted walls of the Red Sea. Schoenberg’s unfinished opera Moses and Aron is somewhere beneath all this, as well as maybe all of Exodus and everything in the Bible after, the 12 Tribes of Israel and the 12 Apostles included. It’s all sort of puzzling, but also wonderful. Ern (the Carpenter who styles himself as the waited-for Saviour) anoints himself leader of the raft (“A shame as the polls closed yesterday,” he says). He mounts a soapbox Mt. Sinai with the hope it will “appear religious,” and delivers the ten rules of the raft like a first-time Moses. Do not drink the sea water is one. Do not fall into dream another. On this raft, in this poem, the sea below contains all the myth the book could hope to draw. And it’s true, Norma could just as well be speaking of the richness of The Raft itself when she gets a mouth of saltwater, seems to fall to dream, and tells her husband Chippie:

I got a taste of the holy waters right there in my gargler and how could I swallow now, so Chips, I began to… swill like one of those sommy-airs… aw it was like an ode to Vichy water aw it was enbrined with all the flavours, I got the parting of seas, the exodus, the plagues, the blood lettings…(of the first born), the prophet in the reeds….

“The First Day” of The Raft is excerpted here.

PrevPreviousApplies to Oranges, by Maureen Thorson, applies to us as well
NextAppendix Appendix from Ryan Gander and Stuart Bailey is good TVNext