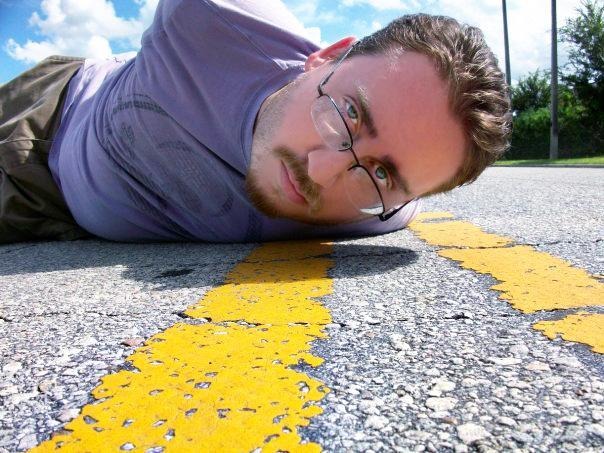 J. Bradley is a mad poet and now is a mad chapbook author. His new chapbook is called The Serial Rapist Sitting Behind You Is A Robot. It was put out by Safety Third Enterprises which is put out by Words For Guns. Know those peoples, you will be all the better for it.

I have no idea what The Serial Rapist is about, only I know that it got banned from a print shop or someone or something did, it doesn't matter because this is the Internet and we're creating a lore around J. Bradley and this book. I heard it was good. Really good. That should be enough.

J. Bradley is the author of Dodging Traffic (Ampersand Books, 2009), and is also the Interview Editor of PANK Magazine.

Across the table in a little tapas place, I watch the way her right index finger curls her hair. The Mayans said when a woman did that to her hair, it indicates she wants you in her mouth later or perhaps that was Maya Angelou who said that or was it the second glass of sangria? No matter. She keeps playing with her hair and the moral compass of her toes point toward me. Keep it cool. Keep it cool.

I believe in fair trades. Tom Green lost one of his testicles to cancer and in exchange, he was married to Drew Barrymore for five minutes, Lance Armstrong won seven Tour De Frances after losing a testicle, HIV made Magic Johnson moderately interesting. What happened to Roger Ebert is terrible but goddamn, he has become gorgeously eloquent and his Twitter feed is a daily reminder of that.

The word “negative” is the most beautiful word in the world when used in the context of your STI test results.

04: The brand on the box of condoms
When I was seventeen, I had sex with two girls and during the first or second time I had sex with them, the condom broke. Both of those times, I used free Trojans my mother got at the local college. I've used Lifestyles ever since and I'm proud to say I am no one's father nor have I ever had a woman who I was with prove she was pro-choice when push came to shove. Remember kids “No glove, no love”.

05: The final judgment of my divorce

I have it on my refrigerator as a reminder of what I've lost and what I've gained.