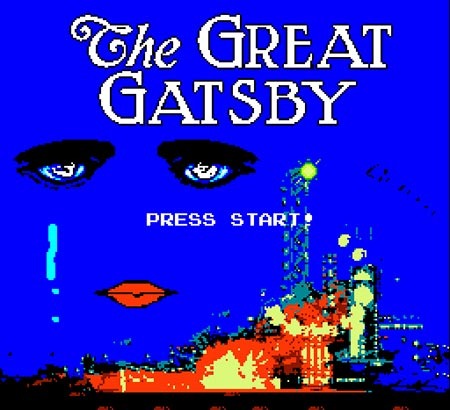 Over at The Rumpus, there's a great interview with Peter Smith and Charlie Hoey, the creators of The Great Gatsby game. The game is set up like an old-school NES game. Peter and Charlie said the limited graphics put the emphasis on the imagination rather than on a technical setup:

Smith: For me the NES had the perfect balance of
capabilities – it was complex enough to do really interesting things and
make really immersive environments, but not so graphically powerful
that the graphics could really become the focus. There are a number of
really wonderful SNES games too, and a lot of people say that’s where
the perfect balance was for them, but in general I like having more left
to the imagination. While I really adored Zelda III as a kid, as I’ve gotten older, I’ve come to prefer the original Zelda, almost for its austerity, I think.

The original backstory to the game was that it was found at an old garage sale. A creation myth for sure, but one the founders wish they could have carried on:

Hoey: If money and time were no object, I think I’d
have printed the whole manual and made the real cartridges and just
hidden them around at flea markets and let the world slowly discover
them. But I definitely wanted to put it in the context of a real game
as best I could. It’s in flash, and there are inaccuracies, so it
wasn’t a conceit I was going to really defend tooth and nail. I wanted
to just set the scene and let people take it or leave it.

Read the rest of the interview over at The Rumpus.