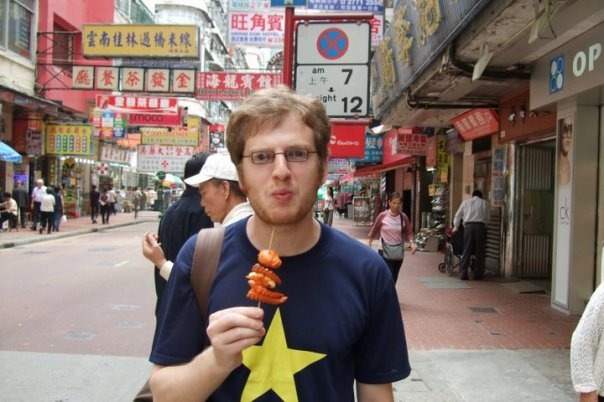 There's that trite saying “there's power in numbers” or someone told me that once and I've only come to understand more in the last few years, i.e. “no man is an island” but maybe there is something bigger, grander in a collective spirit, like 2 + 2 = 5.

There's your PR BS for the day or it could be an appropriate intro to Justin Taylor's new work, The Gospel of Anarchy. At its most literal it's about a Gainesville punk rock collective at the turn of the century, but at it's most meaningful, it's a full-on forward plunge through ideas of belief and hope, uniting a punk rock ethos with observances of spiritual possibility.

Justin Taylor lives in Brooklyn and his collection from last year, Everything Here is The Best Thing Ever was one of my top books for 2010. Gospel of Anarchy is sure to find its way on a similar list this year. Here are a few questions with Justin (and oh yeah, he's been here before):

I told my wife that this was the most Christian non-Christian fiction book I've ever read. That probably won't do for a marketing slogan, but I guess what I was really thinking was that you really describe spiritual experiences in a vivid way.

Thank you—that means a lot to me to hear. Like my protagonist, David, I come from a virulently secular background, so a huge part of writing this book for me was figuring out how to inhabit the language of belief, and to take the questions of faith seriously on their own terms. When I describe the book to people, most assume that it’s some kind of satire or denunciation, but it’s really not. I’m not a Christian, but I’m not sure this is a non-Christian book. Cultural conservatives will find plenty to object to about this book, but I think that Christian readers across the political and denominational spectrum will come away feeling as if their beliefs were explored in a full and serious away.

Are the tenets of the Gospel of Anarchy purely fictional? Or did you get some inspiration for those somewhere?

My book draws from many sources. It is interested in the histories and internal conflicts of two great traditions—Christianity and anarchism, both of which are utterly heterogenous and in constant flux. But if you’re speaking specifically about the “Seven Theses of Anarchristianity”, it’s a mixture. Most of the language and ideas are original, though some of it is borrowed, as in “Chaos is older than Creation,” which comes from the mystical anarchist Hakim Bey. Parker, the character who authors all this stuff, is consciously trying to unify the aforementioned traditions, which to him means embracing paradox rather than glossing it over. “The Pattern” is one of Kierkegaard’s names for Christ; he means that you pattern your life on Christ’s. So when Parker writes that “The Pattern is the breaking of the Pattern,” he is thinking the way that Kafka might have when he wrote that “the Messiah will come when he is no longer necessary.” It’s a question of whether “the pattern” should be followed at the level of the letter, i.e. to follow Christ’s literal instructions, or at the level of the spirit, where to be like Christ means to radically upset the balance of reality. In a Christian world, the target of that upset is necessarily going to be Christianity itself.

Do you think the way the members of Fishgut (the punk rock house) reacted to Parker's writing was a uniquely 'punk' thing to do or just more of a young person type thing to do? I'm considering the level of sincerity or gravity they put towards the effort of preserving it…

I don’t know that it’s one or the other. To be young is to be a believer—all that passion has to be aimed at something or you just combust. And to be punk is most definitely to be sincere, and one of the most sincere things about punk culture is the awareness of and comfort with its own built-in disposability. Zines and DIY albums are meant to be produced cheaply and quickly, consumed immediately, and then tossed. Of course there are many people who collect and preserve these things as artifacts, but the status-as-artifact is totally incidental, and may be antithetical to the ethic that produced the item in the first place. I think that the Fishgut-folk are not so much about “preserving” the text as they are about getting the ideas out there into the world as fast as possible. They don’t produce an illuminated manuscript, like in A Canticle for Leibowitz. Each individual copy of the zine is as disposable as a Jack Chick tract.

I've only been to Gainesville a few times, but have heard of its anarcho-punk roots. Why is that scene so strong there? It seems to go beyond the fact that it's just a college town.

Hard to say how these kinds of scenes get established, but once a town has this kind of heritage it becomes a destination for the like-minded, and that makes it easier to perpetuate the tradition. A lot of great bands have come out of Gainesville over the years, and there’s great community there. No Idea Records is there, the Wayward Council, Common Grounds. A lot of places that came and went before I ever saw the place, and many more since I left, but it only takes a handful of venues and a lot of enthusiasm and you’ve got yourself a cultural hotbed. It helps that it is a college town, and it helps that it is far enough up into Florida that people can swing through. You wouldn’t get this kind of thing down by, say, Sarasota even though they have New College, because for a touring band it’s a full day drive down there and another full day to get back out. That’s the music side, anyway. The politics part is actually kind of easier to pin down. Gainesville has a proud tradition of hard-line progressivism. I knew guys who told stories about running the Klan out of there in the ‘70s. There’s a great organization down there called the Civic Media Center that was started in response to the disinformation surrounding Gulf War 1. These people—not students, but permanent residents of the town—were so disgusted by mainstream media coverage that they started their own info-shop, and the model they created has been replicated all over the country. I think 2011 is their 20th anniversary, which reminds me I should write them a check. Incidentally, they have an utterly magnificent ‘zine library.

Lastly, the character David really changes when he comes into the community. Is community or being part of the community as transformative as the act of believing?

I think so, yes. When I lived in Gainesville I was part of an intensely close group of friends—in our best moments it really did feel like individuality had been transcended. Everyone was always in everyone else’s space and in their minds. But it wasn’t a feeling of being de-individuated, as in brain-washed or hive-minded; you retained selfhood while feeling like an integral part of a larger entity with its own personality, that was beautiful and capable of anything. I was most definitely a believer in that community, we all were, and we were each transformed by that experience. It was never meant to last forever, and indeed it did not, but it was the best version of itself that it could have been, and looking back at the remove of many years I can say without irony or reservation that our faith was justified.