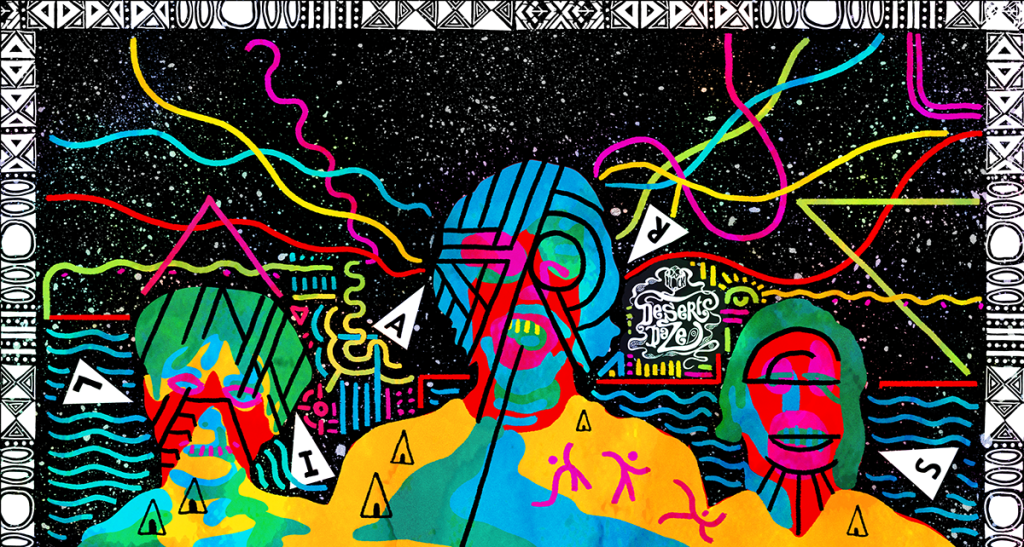 As Desert Daze approaches, we continue our interview series with Angus Andrew of Liars (read our previous interview with Sune Rose Wagner of Raveonettes here). The ever-evolving experimental trio, currently in a state of electronic hysteria, might rarely be mentioned in the field of psychedelia, but the organizers of Desert Daze are intelligent enough to push the expectations of the genre in booking fringe acts like Liphemra, Al Lover, and Liars. One could autopsy the oeuvre of Liars to discover remnants of psychedelia, but those traces are pale to the universal appeal of a band that has never limited itself without good reason. Hearing Liars among the genre purists and degenerates, the splicers and blenders, and all the trippy vibers inbetween widens the scope until there is no choice but to transcend.

Liars recently released Mess is the band's seventh studio album. Largely constructed from session leftovers from their previous album WIXIW, Mess is Liars returning to an instinctual recording style the band has not entertained since its earliest output. The glaring difference is the equipment within arms' reach of the artists. As Angus Andrew notes in our interview, he and Aaron Hemphill originally “worked in a super immediate and instinctive way. Over time that process gave way to something a lot more cerebral and academic.” From the outset of Mess, “Mask Maker” nullifies expectations of the cerebral and academic, as a demonic voice requests “take my pants off, use my socks, smell my socks” and it goes on in that manner of increasingly displaced fetishistic demands to a rising rhythm and arpeggiated synth flourishes. Hedonism becomes synonymous with instinctual on “Mask Maker” and it all sounds like something worthy of hearing in a California desert late into the night.

You're playing a festival that has largely booked psychedelic music. Would you place Liars within that realm? What sort of relation do you have with psychedelia and are there associations you'd rather not have tied to your band?

I love the idea of being considered a psychedelic band even though I can't really say it's something I've ever considered. To be honest I don't usually give much thought to these kinds of categorizations. It's certainly not something that informs the way I listen to or create music. Still yes, I'm happy for Liars to be counted in with the psychedelics!

Will the desert setting and the festival atmosphere (possibly even restrictions on set lengths) influence the set? Have you given much thought to the type of Liars set that would translate best to a desert party? Or even disregarding the Desert Daze festival, how has the last two records complicated the live set in general?

Yes. Generally an outdoor festival setting will directly inform what songs we choose to play. Some of our work relies quite heavily on room acoustics so those songs might not sonically translate well in the open air of the desert. Still, much depends on how we feel when we get there and what mood is possible in the moment. The last two records we've made are primarily electronic so our sets generally have a strange and sometimes jarring mix of instruments and styles which I like, but can often feel quite schizophrenic.

Many past writers/interviewers have noted the aggression in your music and you've expressed that the important factor in keeping it present is that it's not contrived. Do you have a ritual when you are recording that gets you to that place of aggression purity? Or does it evolve with each record?

I think the aggression you hear is derived more from a place of anxiety than a sense of anger. It's a mindset created by the very common modern day attributes of nervousness, chaos, and fear. In that sense it's ever present and doesn't really need to be summoned or much worse, contrived.

When did the idea of “mess” as a concept enter the record? Preconceived, as you were recording or decided upon after it was finished?

As we were recording things started to fall in (or out) of place. We can be very fastidous in writing, particularly with the computer, but our goal with Mess was to be spontaneous and care free. Essentially we hoped to create a free-form mess, but by design. The more we thought about the way we were approaching the music and the fun we were having making it the more the concept of a mess became appealing and applicable.

Mess was largely built from leftovers in the WIXIW sessions and from the grueling process of making WIXIW you approached Mess with less pressure and more fun. Had that happened ever before going into a record? Have you ever needed the process to be casual and fun rather than take a psychological toll on the band? If not, do you have any thoughts on why that might be?

I think very early on when Aaron and I first began making music together we worked in a super immediate and instinctive way. Over time that process gave way to something a lot more cerebral and academic. I don't think that's bad—it's simply a different way of approaching album making. With WIXIW though, we felt like we'd reached some kind of tipping point, where for the first time our ideas turned back on themselves in this sort of self reflecting psychosis. It was heavy and we needed reprieve. Mess afforded the opportunity to laugh at ourselves again.

I'm recently learning Liars are Clippers fans. The Clips are currently sitting at the 3 seed in the West. How would you rate their performance this season? Do they have what it takes to make it to the finals?

I'm not sure there's enough room in this interview for me to go into the kind of detail I'd like to about the Clippers. Let's just say quite simply that this season has been a complete game changer for the team and its perception around the league. And yes, I wouldn't be a fan if I didn't believe they have what it takes to go all the way and in fact win the whole damn thing! Really, in my mind, injuries could be the one deciding factor that determines the eventual success of the Clipps' season.

You've said inspiration has little to do with surroundings and that it more comes from interacting with your tools. Do you still feel that way and do you feel the band has found a connection with the universal, since despite keeping blinders on to your surroundings, Liars remain a very relevant and highly praised band?

I think my point of view has been slightly misconstrued here. Inspiration can come from anywhere—it really depends on what you're looking for or are open to be inspired by. There are certain times when I've felt very emotionally and intellectually influenced by my surroundings [Sisterworld] and other times when I've chose to reflect on things that are more internal and personal [WIXIW]. It's really just a matter of deciding beforehand what your goal is with the project, album, or song. I like being in control of what influences me. I like taking the initiative to determine what I think is worth allowing into my headspace and what I'd prefer to block out.