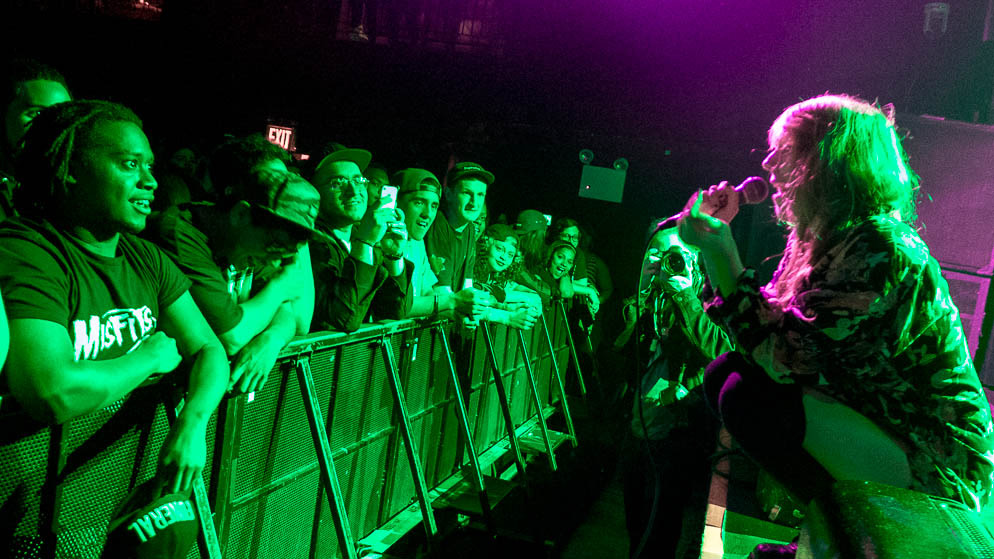 Last night, Detroit rapper Danny Brown blew through Irving Plaza, filling the floor with awkward moshing teenage boys more comfortable stripping their shirts off and slamming into other male bodies than watching a woman perform some raps about being awkward. And if that was all that had happened, we'd write it off. Awkward moshing teens usually do these things, it's normal.

However, when New York-by-way-of-Florida rapper Kitty performed her raps about being socially uncomfortable and bored on the internet, at what was probably her largest New York audience to date last night, the crowd found an in and turned menacingly ugly. Kitty had tried to talk about how much she liked Danny Brown and was grateful to be touring with him. A gracious guest on a notable act's tour. Though the audience had initially appeared meaningfully uninterested, the crowd picked up at this point, and began to scream back at her, “SUCK HIS DICK! SUCK HIS DICK” for so long that Hot Sugar, Kitty's collaborator, threw a bottle of water into one of the chanter's faces.

This morning, when the “news” “broke” (i.e. people started tweeting about the events that unraveled at Irving Plaza), the standard defense was “When X opened for Y, X was booed!” which is slightly different from “When X opened for Y they shouted 'SUCK HIS DICK.'”

Oh, Danny Brown got booed by dudes at the A$AP show?

Oh, Danny Brown got booed by dudes at the Childish Gambino show?

Oh, Danny Brown got booed by dudes at the Das Racist show?

Were those crowds shouting out sexual suggestions like “CUP HIS BALLS, WORK HIS SHAFT?” In all my years of show going i've never seen this sexual aggression taken at any male act and that is where the big issues lies.

As many people have been commenting, Danny didn't have to come out during his set and say “Now, boys, settle down” because, frankly, he shouldn't have to.

Those fuckwits should know that a level of aggression that takes a sexual edge is not okay to be directed at a female performer simply because they're a female performer (shout out the dude at Floristree who yelled “Show us your tits!” at Mika Miko).

When I injected myself into the Twitter conversation (shout out my big mouth) to point this out, Danny Brown called me creepy.

And then someone who can't read accused me of being misogynist (shout out my ex-girlfriends).

@kotgb You think women are weak and need men to protect them? Fuck you dude, misogynistic bullshit crawl back to the middle ages.

Since my tweets were misunderstood, let me be clear:

There are those on Twitter and on blogs who state that Danny Brown should have said something or stopped it and affirmed his support for Kitty. I think this stance is misguided. I believe assholes shouldn't yell unwanted sexual shit at women, period. If we are supposed to be angry when Danny Brown was sexually assaulted on his tour by an enthusiastic fan, why is it perfectly acceptable for several people at a show to yell “SUCK HIS DICK!” to Kitty? Simply, it's not.