So when the week finds you bored you can catch up on Kardashian sister bogus diet pill scandal, Snooki's baby bump watch, or follow the Santorum v. Romney, GOP blah fest like it's something to do while we wait for baseball to return. Meanwhile, here's the alt pop scoop in no particular order.

We begin with a collaboration between CSLSX and I Break Horses with the monumental, shimmering brilliance that is “Violent Sea.” The mysterious Philadelphia collective CSLSX has aligned forces with Stockholm's Maria Lindén and Fredrik Balck to Break Horses together and make music that towers in an unending motion. If they all didn't agree to end to the song at the 4 minute 18 second mark it could go on forever without over staying it's welcome. Look for I Break Horses touring about North America with M83 this April through May.

And we almost forgot to mention that there is an elegant black and white video to accompany “Violent Sea.”

Grave Babies released a listen to “Nightmare” from the cleverly-titled Gothdammit EP. The Seattle scuzz pop mongers take the gritty engineered feedback you heard on old Joe Foster produced indie noise and go all the way for an underbelly of pop genius untamed. I mean, these guys have a song called “Eating Babies” for chrissakes. At any rate, we are happily anticipating Gothdammit April 17 on Hardly Art.

Soft Riot delivered a listen to “You Can't Please Everyone” which broods darkly and begs to be remixed. Luckily on his debut EP Another Drone in the Head remixes are featured from ∆AIMON, Babe Rainbow, FUNERALS, William Winslow-Hansen, and Chris Flatline of Mild Peril. The man behind the project goes by the name of Jack and makes dark mood synthpop tunes from the UK by way of Canada. Soft Riot's EP release Another Drone in the Head is available now from Tundra that includes the aforementioned song reworkings.

Then be sure to catch Led Er Est at Room 205, closing it out with a performance of “Bladiator.” 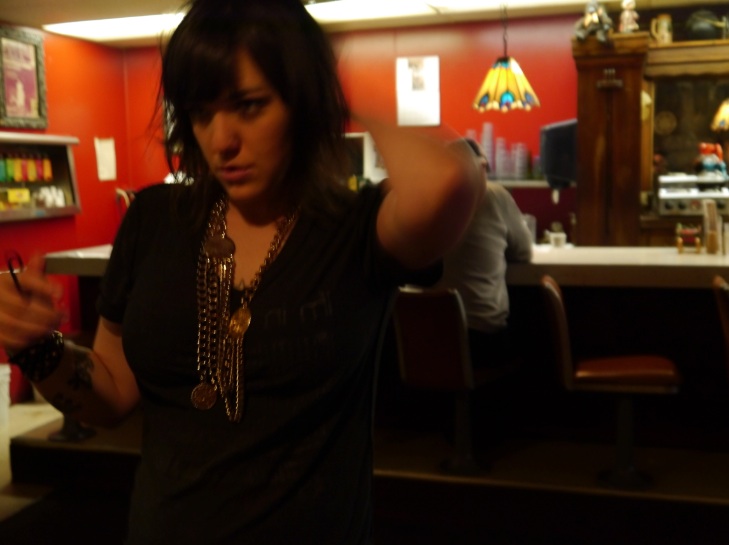 Kid Koala remixed Emily Wells “Passenger” which provides a gentle pulse of instruments that breath throughout the remix for a percussive finale. Perfect for those mid-day naps and thoughtful moments spent thinking about how far one can stretch their EBT budget for the month. Emily Wells' new album Mama is due April 10 on Partisan Records.

Not to be confused with “Passenger,” Exitmusic provided a listen to the emotional maximus beast that is “Passage.” The Brooklyn duo Devon Church and Aleksa Palladino are devoted to music that should be played after you win whatever task of accomplishment. Like having money for veggie burrito where you order, eat, indulge, walk out of the taqueria in slow motion like you just won the Tour de France and cue Exitmusic. Their debut album Passage drops May 22 on Secretly Canadian.

Allo Darlin' released the video for “Capricornia”. The Nik Vestberg directed video depicts the group jangling about in an expansive room with lovely wood floors. The 7-inch single is set for release March 6 while their long player Europe is slated for April 17 on Slumberland. Dolla Will dropped a video for “Addicted” along with a mixtape this week. Download Life Before Dolla Will here and stay tuned for further details about Will's upcoming album Boss Flow rumored to be released later this year.

Royal Headache released their single “Girls” with news of an upcoming re-release of their self-titled on the Australian indie R.I.P. Society. The Sydney quartet consisting of Shogun on vocals, Law on guitar, Joe on bass and Shorty on the drums deliver guitar hooks played loud through overclocked and over amps and PAs. Royal Headache's self-titled debut comes out May 8 on What's Your Rupture? and will be found at this years Chaos in Tejas with further tour dates to be revealed soon.

2:54 have caused a good stir with their popular new track, “You're Early.” Filled with that hollow guilt you feel when you arrive late to that special date, forget that birthday, steal that last Belgian beer from the fridge without replacing, show up to the party with buzz kill stories about the sensitive fungal maladies that afflict sensitive friends and plenty more scenarios that will be evoked from 2:54. The single officially drops on April 9 and their EP Scarlet drops this Monday on Fat Possum.

Yukon Blonde's “Stairway” lifted our spirits this week and we hope it will do the same for you. Look for their album Tiger Talk March 20 from Dine Alone Records.

Big Baby Ghandi saw the official leak of his debut single “Blue Magic feat. Das Racist.” Born Nasif Islam, he is the latest to join Dapwell, Heems and Kool A.D. and to their Greedhead Records family and it looks like they are keeping him fed on a well-balanced dolla bill diet. Keep on the watch for his full-length mixtape No1 2 Look Up 2 drops March 30th.

Bago's video for “Dr. Lock” hit the interweb this week with visuals compliments of the High 5 Collective. What you get is a Sam Spade adventure involving some photographs and late night detective work. Look for Bago's full length album this upcoming April.

We just got hipped to Dumbo Gets Mad with a collaboration with Venice to bring you the psyched out video for “Viaje Astral.” Check out DGM's bandcamp for further info from their label parent Bad Panda Records.

Sidi Touré released the video for “Ni See Say Ga Done”, shot on 8mm footage by Frédéric Wasiak and edited by Covalesky. “Ni See” is done in a takamba style popular in Gao, where Sidi is from, and where he sings for the esteemed Aminata Maïga (wife of Ibrahim Boubacar Keïta, former prime minister of Mali), who supported his music back in the day. Look for Sidi Touré's album Koïma this April on Thrill Jockey.

Justin Hopkins of RareBit debuted the video to “Mt. Weather” that ignites an arid landscape into a pyschotropic light show of color directed by Sean Ferris.The Daizo LP is out now on Non Projects.

Nite Jewel has released the video for “One Second of Love” involving creepy dancers, a goat headed minstrel and a strange ladies night of the occult in the Delaney Bishop directed video. You will wonder whether or not all the weirdness is somehow being controled by Ramona Gonzalez or if it all was just a proverbial dream. Nite Jewel's One Second of Love drops March 6 on Secretly Canadian. 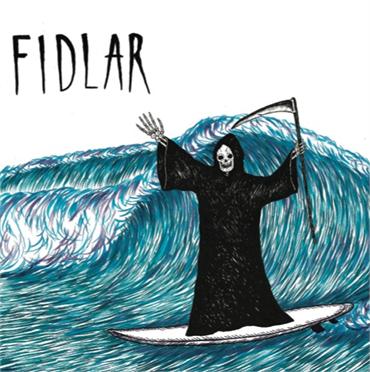 Fidlar's new single “No Waves” caught our ears this week with their anti-hero, wave-busting rock. Brandon, Elvis Max, and Zac also use a series of “I feel” statements that are part confessional, part sentimental exploration and probably part wasted. Fidlar's No Waves/No Ass 7″ available March 13 on Mom + Pop. Keep an eye on these dudes and their hectic SXSW schedule later this Month.

Radiation City's video for “Find it of Use” finds the band starting 2012 off right by destroying their old yet beloved piano. Read what the band has to say about their dearly departed instrument:

“The piano has lived in drummer Randy Bemrose's basement for eons. It's old, cumbersome, and on its last legs. The band used sounds from the piano throughout the recording of this new EP… not just the keys though, the clicks and clacks from the body, the slamming of the lid, and virtually every other sound you can imagine making on the piano. After they were finished, the piano was beat up, out of tune, and falling apart. Having used the old piano of all it's worth the band felt as though they had to pay just respects to the dying instrument. As a celebration of an intense year, and the successful creation of something new, Radiation City engages in the ceremonial destruction of the old piano. The gesture is a slate-wiping. It marks the end of the beginning. The piano is a relic in their lives– it feels archaic and decrepit. The last sounds the piano ever made were immortalized in the recording of this EP.”

You can find the band at SXSW selling keys from the old piano attached to USB sticks of their new EP Cool Nightmare which comes out March 6.

If Rx Gibbs' EP Futures has been filling your days with tranquil delight then you are invited to flee from your cold cubicle and into the warm waters in this aqua-themed video for “Silver.” The Andre de Freitas video brings out the song's lush qualities of body hugging keys along with the chopped mix of vocal breaths and utterances that few of us can ever get enough in music these days.

Should you need more Rx Gibbs, get a listen to the Whendays remix of “Silver” to bring into clubbier atmospheres.

Dope Body released “Lazy Slave” which is full of all kinds of thrashing, yelling, chugging, repeat. The Baltimore, MD foursome is following up last years debut Nupping with Natural History May 22 on Drag City. For when your bro has exhausted all his Thin Lizzy discs and your bourbon, throw this sucker and all will be forgiven.

Shigeto has captured our ears, minds and thoughts about how we view the electronic epic with the recent release of Lineage and now taking an interesting take on Sufjan Stevens' “Futile Devices.” Even for those not on team Sujan will enjoy what Zachary Shigeto Saginaw does with the well placed blend of piano keys and keen assembled patterns of string ensembles and acoustic guitar strums.

As we remember the Monkees' Davy Jones, we close this week's round up with the gorgeous Carole King and Gerry Goffin written/Jack Nitzsche produced “Porpoise Song”, otherwise known as the theme to the Monkee's big time-late-60s-Sgt.-Pepper-concept knockoff, Head. Thanks for everything Davy.