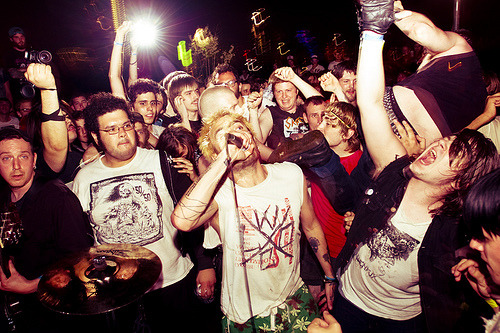 Looks like a fun weekend here in the SF, despite forecasts of rain. Friday we have Nodzzz, Ty Segall and Monotonix at the Rickshaw, Get Up Kids at Slims Saturday (if you’re, you know, into that sort of thing), Weekend at the Hemlock Tavern, and Surf Music Extravaganza VI at Milk Bar Sunday afternoon, featuring some excellent power trio board-busting anthems from Trivalve and company. Also, Pansy Division and the Minks at the Eagle. Or spend an evening gawking at the not so discreet charm of the Marina’s bourgeoisie at Medjool in the Mission while you can. Or feel free to vicariously live the dream through this Week in Pop as I list it in no particular order.

While we are ecstatic for the upcoming SXSW 2011 festival in Austin, the seventh round of Chaos in Tejas promises to bring the gathering of beards and bong water-bathed, weary-eyed wanders to the Gold Star State June 2-5. See with your own eyes to believe.

Philladelphia’s Brown Recluse have their debut album Evening Tapestry set for release February 15 on Slumberland Records. But for the impatient set, their first leaked single “Impressions” might put an extra hop in your step.

Brown Recluse “Impressions of a City Morning” by Slumberland Records

And if you are still craving more they have an EP entitled Panoptic Mirror Maze available for free immediate download on Brown Recluse’s Bandcamp page that will either fan your own reclusion or incite you to get over your self-imposed agoraphophia and share ear buds with that certain special someone in your life, or maybe that stranger on the morning commuter bus.

Speaking of Slumberland bands, Rose Melberg of Go Sailor, the Softies and Tiger Trap has a new band and EP called Brave Irene. Street date for release is March 15 but we have the single “No Fun” right here. You may be expecting some cover of the James Osterberg classic, but you'll be treated to what will only remind you of why you fell in love with Lush back in the day, after you traded in your Talulah Gosh or Pooh Sticks singles collection at Rough Trade. If anything, this song has me clearing my Friday afternoon for a felt flower craft party. Or on second thought maybe not.

SF hometown heroes Hunx and His Punx have an album called Too Young to Be in Love coming out March 29 on Hardly Art and have decided to give us more previews and insights.

First is the single “Lovers Lane” which has more doo-wop and rumble seat tales than a 50s Ford.

Hunx and His Punx, “Lovers Lane”

Catch Hunx and all the excitement on the road with Shannon and the Clams and supporting for better or worse Bethany n’ Nathan at SF’s headlining Noise Pop event at the Regency Grand Ballroom.

Heard that those dodgy blokes Tennis are embarking on a massive tour of America involving a whole cast of supporting characters too numerous to list. They also have made a mixtape of artists they dig on International Mixtapes to show off their relevance and taste.

Kid Congo Powers of the Gun Club founding fame and guitarist for the Cramps and Nick Cave and the Bad Seeds has an East Coast Tour in the works with his band the Pink Monkey Birds. If all this serious and moody music has got you down, this little gem “Rare as the Yeti” is sure to get you walking with the beast.

Catch Kid Congo and the Pink Monkey Birds on the road.

On a closing note, I want to recognize Country Music Hall of Fame, country rock and bluegrass icon Charlie Louvin’s lifetime of pop contributions with the Louvin Brothers and great influence on Gram Parsons and the Byrds on their album Sweetheart of the Rodeo. He exited this world at 83, leaving songbooks of modern hymns that Taylor Swift might want to consider re-working if she truly is the contemporary Sweetheart of the Grand ol’ Opry. I’m just saying.

PrevPreviousLady Gaga's new fragrance to smell like “blood, semen,” that futon in your garage in high school
NextThe two How to Dress Well videosNext